She iterates no reason was cited for arbitrary decision 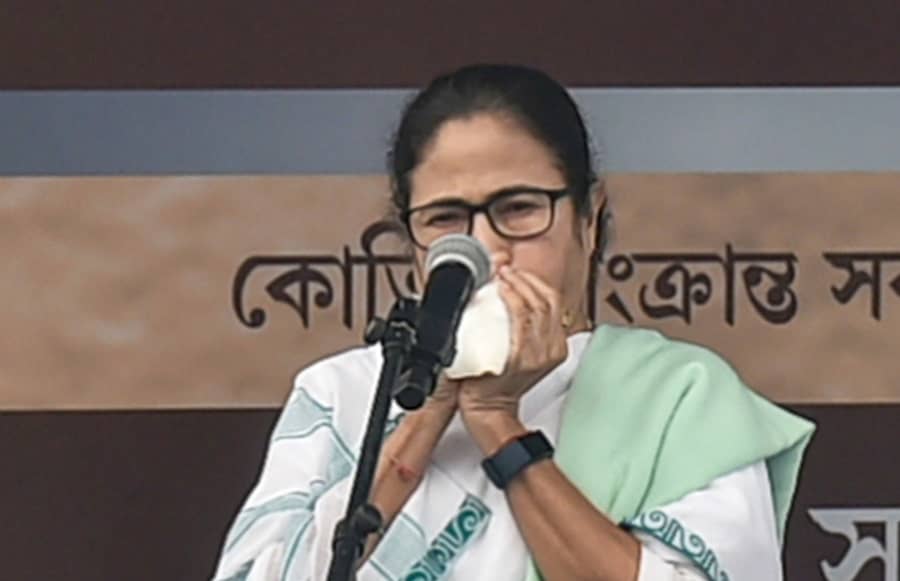 Sharpening her attack on the BJP, West Bengal Chief Minister Mamata Banerjee on Sunday said the Narendra Modi government, with the promise of installing a statue of Netaji Subhas Chandra Bose at the India Gate, cannot absolve itself of the injustice done to her state by rejecting its Republic Day tableau on the legendary freedom fighter.

She iterated that no reason was cited for summarily rejecting the tableau.

"We will roll out the tableau during the Republic Day parade on Red Road here. You (People) will see how vibrant and creative it is, summing up the spirit of Netaji's valour and our 75th Independence The Centre cannot absolve itself of the injustice done to Bengal by rejecting its tableau," she said during her speech here.

Hitting out at the Centre, the TMC supremo said that the BJP-led Centre failed to live up to its promise of unearthing the mystery behind the disappearance of Netaji.

"You cannot proclaim love for Netaji by setting up a statue, what have you done to unveil the mystery behind his disappearance? This government at the Centre had promised to unearth all mysteries after coming to power, but it failed," the CM stated.

She maintained that her government, on its part, "digitised all files related to Netaji at our disposal" to make these available in public domain.Mamata slammed the Centre over its move to merge Amar Jawan Jyoti with National War memorial flame.

"Your act of extinguishing the Amar Jawan flame cannot be atoned by installing a statue of Netaji. Please stop politicising war memorials and statues," she lashed out.

"The very concept of federalism came from stalwarts like Netaji, Rishi Aurobindo and Vivekananda. And BJP is out to destroy the federal spirit of the country as evident in all their steps. They are summoning IAS officers from Bengal to Delhi; they had summoned our chief secretary in the past. They are disturbing our senior officials," she claimed. Not naming any party, the CM said attempts to change and distort the history of the country should be resisted.

"Those making such attempts should be asked if they have read the works of Netaji, his speeches. Remember his most trusted lieutenant in INA was a Muslim. The ones peddling the ideology of division and hatred must first learn about Gandhij, Netaji and B R Ambedkar," the TMC boss maintained.

She emphasised that the glorious history of Bengal in freedom struggle should be taught in schools.

"India's national anthem was written by Rabindranath Tagore, our national song was penned by Bankim Chandra Chattopadhyay, the Jai Hind slogan was coined by Netaji. Bengal and Punjab have made contributions to the freedom movement," Banerjee said.

Listing future plans of her government, the CM said Jai Hind Bahini would be formed in schools, as part of which children would serve people, upholding the ideology of Netaji.

The CM, before beginning her speech, blew a conch shell to mark the time of Netaji's birth, while sirens were played in different parts of state. Netaji's grand nephew and eminent historian Sugata Bose sang the iconic Indian National Army song Subhasji Subhasji' on the occasion.

West Bengal Chief Minister Mamata Banerjee on Sunday paid tribute to Netaji Subhas Chandra Bose on the occasion of his 125th birth anniversary, and said that the day would be observed as 'Desh Nayak Dibas' across the state.

Mamata also made a fresh appeal to the Centre to declare Netaji's birthday as a national holiday.

In a tweet, the TMC supremo said that Jai Hind University will be set up in memory of the revolutionary leader with 100 per cent state funding.

"Homage to Deshnayak Netaji Subhas Chandra Bose on his 125th birth anniversary. A national and global icon, Netaji's rise from Bengal is unmatched in the annals of Indian history," she wrote.

"We again appeal to the Central Government that Netaji's birthday be declared a National Holiday to allow the entire Nation to pay homage to the National Leader and celebrate #DeshNayakDibas in most befitting manner," the CM posted on the microblogging site.

Homage to Deshnayak Netaji Subhas Chandra Bose on his 125th birth anniversary. A national and global icon, Netaji’s rise from Bengal is unmatched in the annals of Indian history. (1/7)

We again appeal to the Central Government that Netaji’s birthday be declared a National Holiday to allow the entire Nation to pay homage to the National Leader and celebrate #DeshNayakDibas in most befitting manner.(7/7)

The CM stated that a tableau on Netaji, which would also feature other eminent freedom fighters, will be put on display at the Republic Day parade in Kolkata.

Describing Netaji as an "epitome of patriotism, courage, leadership, unity and brotherhood", she said he would continue to be an inspiration for generations to come.

"This year, a tableau will be displayed on the Republic Day Parade on Netaji' and will also feature other eminent freedom fighters from Bengal to commemorate the 75th year of Independence of our country," she tweeted.

The Centre had excluded the state's tableau on Netaji from the Republic-Day parade in Delhi, drawing flak from the TMC as well as the Congress and the CPI(M).

Banerjee later said that the tableau would be put on display in the state.

Bengal Governor Jagdeep Dhankar also paid homage to Netaji Subhas Chandra Bose on the occasion of his 125th birth anniversary and said his "life is an inspiration and motivation for all".

Taking to Twitter, Dhankhar also stated that a portrait of the revolutionary leader was unveiled at Raj Bhavan on the occasion.

"Nation pays homage #NetajiSubhashChandraBose on #NetajiJayanti. Grand statue of #Netaji at India Gate Canopy - a befitting tribute to icon @PMOIndia. His life is inspiration and motivation for all to always keep nation first," he tweeted.

The governor, during the day, along with wife Sudesh Dhankhar offered floral tributes at Netaji's statue at Shyambazar five-point crossing.

During his speech at Shyambazar, Dhankhar hit out at Chief Minister Mamata Banerjee yet again, alleging that she did not follow her constitutional duties in the last two years.

He urged her to take oath on this auspicious day to act within the constitutional framework.

"I had sought details on pandemic purchase, Bengal Business Summit, Andal Airport, Maa Canteen, sports club, political campaigns against CAA but got no information," he said.

The governor vowed to carry on his duties as the constitutional head of the state.

Equally worrisome is bureaucracy stance @MamataOfficial in blatantly violating Rules of Business under Article 166(3) of the Constitution and AIS (Conduct) Rules. 1968.

CM called upon to vindicate her oath to “bear true faith and allegiance to the Constitution of India” & act.