Advertisement
Home / India / Mamata, Naidu pitch for all regional parties to come together

Mamata, Naidu pitch for all regional parties to come together

West Bengal chief minister Mamata Banerjee and her Andhra Pradesh counterpart Chandrababu Naidu on Wednesday pitched for all regional parties to come together for development of a federal set-up in the country. 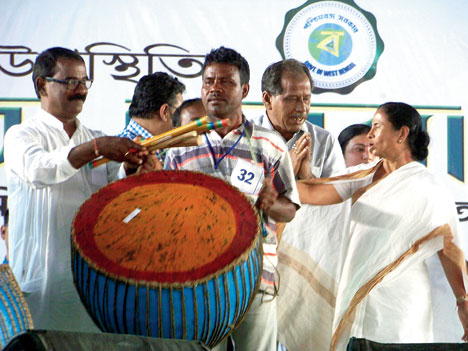 Bangalore, May 23 (PTI): West Bengal chief minister Mamata Banerjee and her Andhra Pradesh counterpart Chandrababu Naidu on Wednesday pitched for all regional parties to come together for development of a federal set-up in the country.

Here to attend the swearing-in ceremony of the coalition government led by H.D. Kumaraswamy, the two leaders said they want to promote regional parties and strengthen them.

Mamata and Naidu said they were happy that the leader of a regional party was assuming office and they were present to express their solidarity with the Janata Dal Secular.

“We are present here to support Kumaraswamy ji and his government and we hope for the best,” Mamata told reporters with Naidu standing next to her.

If states are strong, the Centre would also be strong, she said.

The presence of a galaxy of Opposition leaders and chief ministers at the swearing-in ceremony is being seen as a development that could plant a seed for a broad-based platform against the Bharatiya Janata Party before the Lok Sabha polls in 2019.

Naidu expressed happiness about a leader of a regional party taking over as the chief minister of Karnataka.

“I met Mamata ji and we all have come here to witness the swearing-in ceremony of Kumaraswamy. He is from a regional party and we are very happy that he has become the Chief Minister of Karnataka,” he said.

“We are expressing our solidarity, and also in future we will work together to protect ourselves and to promote nation, that's our agenda” he added.

Asked whether this is the coming together of a front against Prime Minister Narendra Modi or BJP, Naidu said: “We want to promote more and more regional parties. We want to strengthen (regional parties). That is Mamata ji's and our party's mission and that is how we are working.”

To a question on whether his Telugu Desam Party was fine with the Congress' presence at such a platform, he said: “We are witnessing Kumaraswamy's swearing-in ceremony and he is from a regional party.”