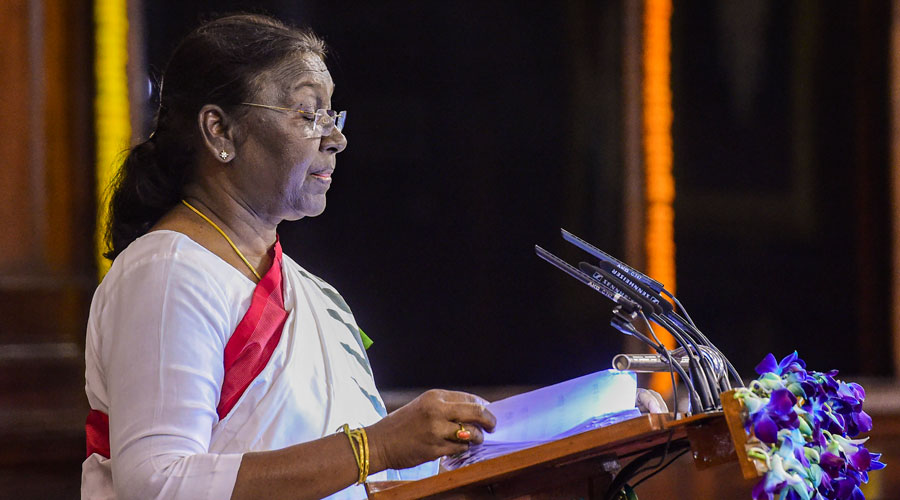 President Droupadi Murmu on Monday said her election to the top constitutional post proves that in India, the poor can not only dream but also fulfil those aspirations.

She was then given a guard of honour at Rashtrapati Bhavan in the presence of Prime Minister Narendra Modi, Vice President  Venkaiah Naidu, the three services chiefs and other dignitaries.

In her address after Chief Justice of India N V Ramana administered to her the oath as the 15th President of India, Murmu thanked all MPs and MLAs for electing her. "I have been elected during an important time when the country is marking 75 years of Independence," she noted, reports PTI.

"Reaching this office is not my personal achievement but that of all the poor people in the country," Murmu told the joint sitting of Parliament.  "My election is proof of the fact that in India, the poor can dream and also fulfil those dreams," she said.

"It is the power of India's democracy that a girl born in a poor tribal home could reach the topmost constitutional post," Murmu added.

In her speech, the President stressed on speeding up efforts to meet the expectations that the freedom fighters had from the citizens of independent India.

She said getting a primary education was a dream for her and added that she would focus on welfare of the marginalised.

Addressing the country's youth, she appealed to them to lay the foundation of the country's future besides building their own. "As president, you have my full support," she added.

Earlier in the day, she visited Rajghat and paid her respects to Mahatma Gandhi. She then met outgoing President Ram Nath Kovind. Soon after,  Chief Justice of India N V Ramana administered the oath of office to her at a ceremony held at Parliament's Central Hall in the presence of former president Ram Nath Kovind, Vice President and Rajya Sabha Chairman M Venkaiah Naidu and Prime Minister Narendra Modi amongst others.