Face-off between forest and energy departments 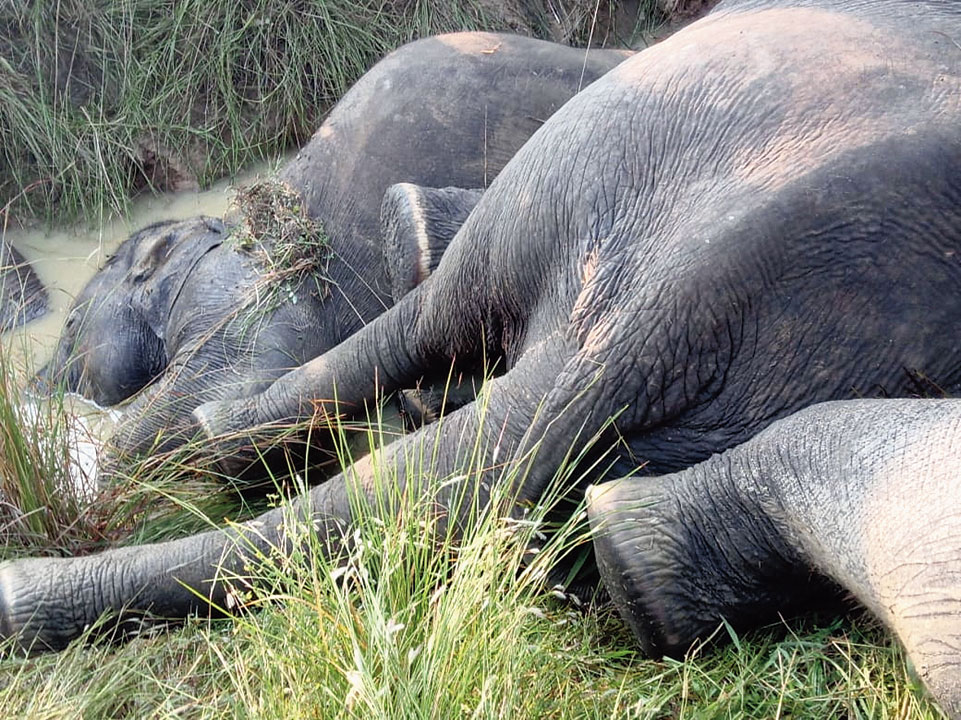 Seven elephants, including a tusker, five females and a calf, were electrocuted after coming in contact with a low-hanging live wire near Kamalanga village in Dhenkanal district, about 100km from here, on Saturday in what is seen as one of the biggest wildlife tragedies in the state.

The 11KV line drawn for the construction of a railway bridge at Kamlanga, about 5km from the National Highway No. 55, was hanging as low as 6ft from the ground. However, the mandatory height of such wires in the areas, where elephant movement is reported, should be 17 feet above the ground.

The jumbos that were killed while trying to cross a water channel at Kamalanga were part of a 21-strong herd. Villagers spotted the carcasses early on Saturday morning in the channel. Sources said a contractor of the company executing the bridge project had been detained.

The temporary lines were laid with the permission of the energy department. The Central Electricity Supply Utility (Cesu) of Odisha supplies power in the area. Though senior officials, including Dhenkanal divisional forest officer Sudarshan Patra, rushed to the area, the incident brought the forest and energy departments face to face.

Cesu has acted against three of its officials, including superintending engineer Naresh Chandra Patnaik, sub-divisional officer Artatrana Nayak and junior engineer Sanjay Mohanty. Sources said services of the junior engineer had been terminated, while the other two Cesu officials were suspended.

Forest and environment minister Bijayshree Routray said Cesu had been warned about the sagging wires in the area. “Ever since 2013, we have been in touch with the energy department on these issues,” he said.

Chief wildlife warden Sandeep Tripathy issued a release asserting that the Dhenkanal DFO had asked Cesu to take remedial steps with regard to the sagging overhead transmission wires. “In the instant case, the Dhenkanal DFO informed the Cesu executive engineer on November 22, 2017 to rectify the sagging transmission line of 11KV from Kamlanga to Kaliataila of the Meramundali section of Dhenkanal range. The DFO had also submitted the proposal for the cabling of transmission line at Kamalanga,” said the release, blaming the jumbo deaths on the “non-rectification” of the sagging lines.

While Dhenkanal collector Nihkil Pavan Kalyan has sought reports from Cesu, forest officials and the Rail Vikas Nigam on the incident, energy secretary Hemant Sharma said an inquiry team had been sent to the area and the follow-up action would be taken based on its report. Stating that a temporary feeder connection had been given to the railway construction site, he admitted that according to preliminary findings, elephant movement had been noticed in the area about 10 days ago. He, however, maintained that the energy and forest department officials had been meeting every month and working in co-ordination.

Odisha, which had 1,976 elephants when the last census was conducted in 2017, has been reporting cases of jumbo deaths because of electrocution with alarming frequency. Dhenkanal district had reported the death of three elephants in June last year.

Official statistics show that 168 elephants have been electrocuted in the state in the past 18 years, the toll being the highest in 2010-11 when 18 jumbos were killed. Significantly, half of these were cases of deliberate electrocution implying that either poachers or vengeful villagers, whose crops had been destroyed by the pachyderms, wilfully pulled down live wires to make them fall in the path of the passing herds.