Home is where you get love, and Kerala is home for me, tweets Rahul Gandhi 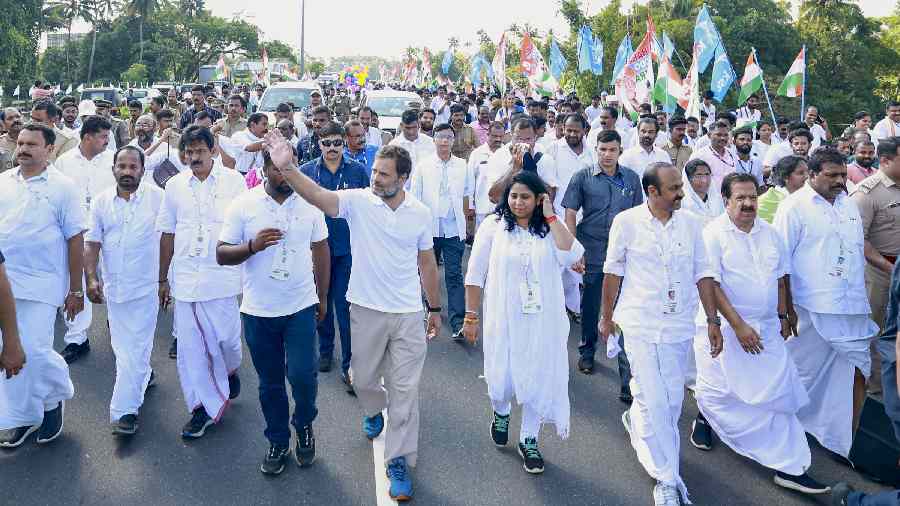 Congress leader Rahul Gandhi on Thursday concluded his Kerala leg of the Bharat Jodo Yatra, which entered the state on September 10 and will resume the foot march from Tamil Nadu in the afternoon.

After the yatra ended its Kerala phase at Vazhikaddavu here, Gandhi and senior Congress leaders Jairam Ramesh and Digvijaya Singh thanked the KPCC and UDF leaders, party workers and everyone else who participated in the foot march during the over 18 days it spent in the state.

"Home is where you get love, and Kerala is home for me. No matter how much affection I give, I always get more in return from the people here. I am forever indebted. Thank you.

"I would also like to wholeheartedly thank the Congress & UDF leaders and workers, Kerala police, media personnel & every individual who has been part of the #BharatJodoYatra in this beautiful state. The support you have given us makes our resolve firmer & our strides stronger," Gandhi, who was accompanied by a huge crowd of supporters in the morning phase of the yatra, tweeted.

Home is where you get love, and Kerala is home for me. No matter how much affection I give, I always get more in return from the people here.

I am forever indebted. Thank you. ♥️ pic.twitter.com/IUiR3O7yMI

Ramesh, the AICC general secretary in-charge communications, tweeted, "Day 22 of #BharatJodoYatra is last day in Kerala. Padayatris are walking from Nilambur to Vazhikaddavu this morning. From Vazhikaddavu we cross to Gudalur in Tamil Nadu by vehicle thro' Nilgiris hills. We are extremely grateful to people of Kerala for their goodwill and response."

Senior Congress leader and national coordinator of the yatra, Digvijaya Singh tweeted, "All PCCs in other States should come and learn the organisational work of Kerala PCC. Finally a Big Thank You to the People of Kerala and all Congressmen of Kerala for their tremendous support and response. #BharatJodoYatra @INCKerala @INCIndia @Jairam_Ramesh."

He also said in his tweet that "today we leave Kerala after 22 days of warm hospitality of PCC Kerala. The tremendous response of the people of Kerala was most encouraging."

"All our Bharat Yatris loved the lovely green terrain and also enjoyed the Boat Race. Thank you PCC President K Sudhakaran ji and our most active State Coordinator K Suresh ji for responding to all our requests," he further said.

The foot march -- which resumed from Marthoma College Junction at Chungathara here -- took a break at CKHS Manimooly at Vazhikadavu after covering around 8.6 km.

According to the itinerary of the yatra, from Vazhikadavu, Gandhi would travel to Government Arts and Science College at Gudalur in Tamil Nadu by car as the route goes through a forest reserve and it is not possible to go on foot there, Congress party sources said.

The march would resume from Government Arts and Science College at Gudalur around 5 PM and halt for the day at Gudalur Bus Stand after covering around 5.5 km.

The 3,570 km and 150-day-long foot march started from Kanyakumari in Tamil Nadu on September 7 and will conclude in Jammu and Kashmir.