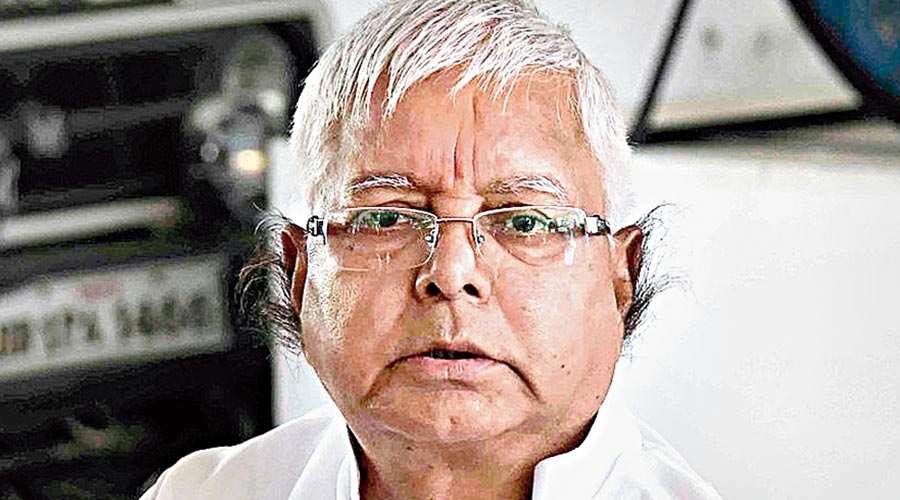 Rashtriya Janata Dal (RJD) president Lalu Prasad alerted party leaders on Wednesday about the impending Bihar trip of Union home minister Amit Shah and asserted that the BJP leader would visit the state with “something morbid” on his mind.

“We need to understand the intention with which Amit Shah is visiting areas like Kishanganj, Araria and Purnea in the state because there is something morbid in his mind. We need to be cautious about his designs over the state,” Lalu said at his party’s state council meeting in Patna.

Lalu stressed the need for everybody to stay away from the communal thoughts and lies of the BJP and said that it was trying to communalise the atmosphere by hoisting saffron flags on mosques.

“We have to strengthen secularism and social justice and march ahead with a determination to uproot the BJP in the 2024 Lok Sabha elections. I never compromised with the BJP and strived ahead strongly due to which we have the Grand Alliance government in Bihar today,” Lalu said.

The RJD chief was addressing the party leaders after an illness-induced gap of over three months. He called on the Grand Alliance to expose the elements that were working to weaken the country, and expressed satisfaction over chief minister Nitish Kumar and deputy chief minister Tejashwi Prasad Yadav working together in this regard.

Lalu is credited with stopping the then “rath yatra” of BJP leader Lal Krishna Advani and arresting him at Samastipur in Bihar in 1990.

Shah is scheduled to visit the Seemanchal region in the northeast corner of Bihar on September 23 and 24. It includes Purnea, Katihar, Araria and Kishanganj districts and has a sizable population of Muslims ranging from 30 per cent to 68 per cent as per the 2011 census.

The move is being seen as the BJP’s strategy that hinges on religion and communal polarisation.

The high minority population in the districts could help the party raise the bogey of changing demography and instilling fear among the Hindus, sources said.

Speaking further on the occasion, Lalu pointed out that the BJP which talked about providing Rs 15 lakh in everybody’s bank account and 2 crore jobs per year was trying to whip up an election environment in its favour by spreading hatred.

“We will have to stop the BJP with issue-based politics. Nitish has started a campaign to bring together the

Opposition parties across the country. He always consults me. We will meet Sonia Gandhi after Rahul Gandhi’s tour (Bharat Jodo Yatra) gets over and put up a strong alternative to the BJP,” Lalu said.

Former Union minister Sharad Yadav was also present on the occasion. He expressed optimism that the people of Bihar would spark a revolution just like the then socialist leader Jayaprakash Narayan had done in the 1970s.

Tejashwi, who is the younger son of Lalu, also spoke at the state council meeting of the party and asserted that there was a need for all the Opposition parties to come together to counter the BJP, just like seven parties came together in the state to overthrow it.

The deputy chief minister also challenged Shah to announce a special package, special category status and financial help for Bihar, as he was visiting a flood-ravaged and poverty-stricken area of the state.