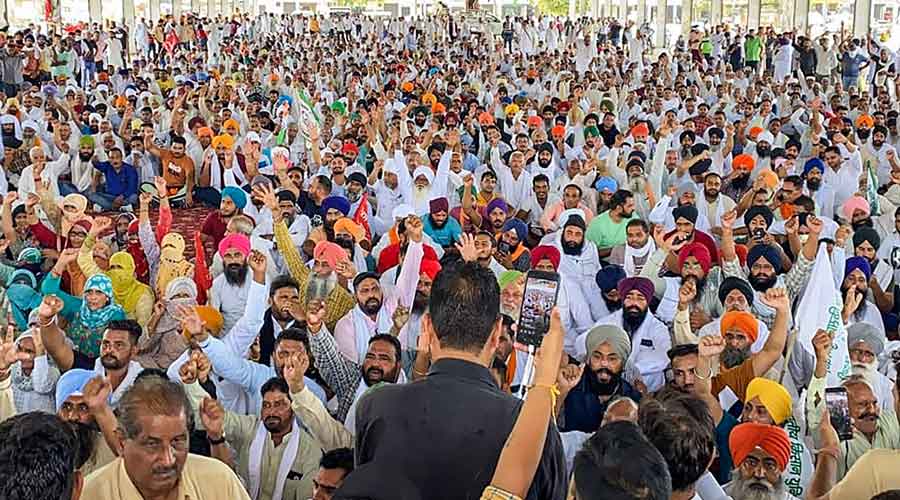 Haryana Chief Minister Manohar Lal Khattar on Monday accused the Congress government in Punjab of fuelling farmers' unrest in his state, provoking a sharp response from his Punjab counterpart.

The exchange took place two days after farmers protesting over laws enacted at the Centre several months back clashed with the Haryana Police in Karnal.

Addressing a press conference on the completion of 2,500 days of a BJP-led government in Haryana, Khattar blamed Punjab for the farmers' picking his state for their protests.

There is a clear hand of the Punjab government in it, the CM charged.

Punjab Chief Minister Amarinder Singh hit back a little later, accusing the BJP, including the Haryana CM, of taking refuge in shameful lies over the horrendous attacks on protesting farmers.

Repeal the farm laws instead of blaming Punjab for the mess your party has put the farming sector in, Singh said in a statement.

Also on Monday, a kisan mahapanchayat at Gharaunda in Karnal issued an ultimatum to the Haryana government.

The meeting demanded the registration of cases by September 6 against those responsible for Saturday's lathi-charge. Otherwise, on September 7, farmers will lay siege at the secretariat in Karnal, a farm leader warned.

Khattar admitted that the choice of words by Karnal SDM Ayush Sinha, who was caught on camera purportedly telling police to "break the heads" of agitating farmers if they crossed the line, was wrong. But he defended the police action itself.

About 10 farmers were injured in the clash. Police said several of their men too were hurt.

But Khattar said, "We will see whether action has to be taken. The DGP is probing the matter and will submit his report. But the officer should have not used such words."

In Karnal, Bhartiya Kisan Union leader Gurnam Singh Chaduni demanded a compensation of Rs 25 lakh and a government job for the family of a farmer who allegedly died after suffering injuries in the lathi-charge. But the state government maintained that he died at his home and was not among the injured.

While issuing the "ultimatum" to the Haryana government, Chaduni also demanded Rs 2 lakh as compensation for each of the injured farmers

He slammed Amarinder Singh for seeking his resignation over the police action in Karnal.

He said it should be Singh who should quit as around 80 per cent of farmers protesting at Delhi's borders appeared to be from his state. Farmers are happy in Haryana," he claimed.

Cautioning farmers against violent protests, the CM claimed that society at large was turning against them.

There are limitations on every freedom. There is no absolute freedom," he said.

Amarinder Singh trashed Khattar's claim that Haryana police used force only after the farmers disturbed law and order, and pointed at the SDM's controversial instructions.

He accused Khattar of defending the "criminal assault" on farmers and warned that the BJP would pay for its "sins" in the upcoming assembly elections in various states.

Recalling that farmers had held protests across Punjab for two months before shifting focus to the Delhi border, the CM said there had been no violence in the state.

Even recently, when sugarcane farmers staged protests, we negotiated with them and resolved the issue instead of using brute force to try and subjugate them, he added.

Responding to Khattar's remark that farmers gave Amarinder Singh ladoos' after the resolution of the sugarcane issue, the Punjab CM said, You repeal the farm laws and not just the farmers but even I will share ladoos with you.