The CPM-led alliance bettered its 2016 winning tally of 91 seats to bag 99 of the 140 seats, with the Congress-led United Democratic Front bagging the remaining 41 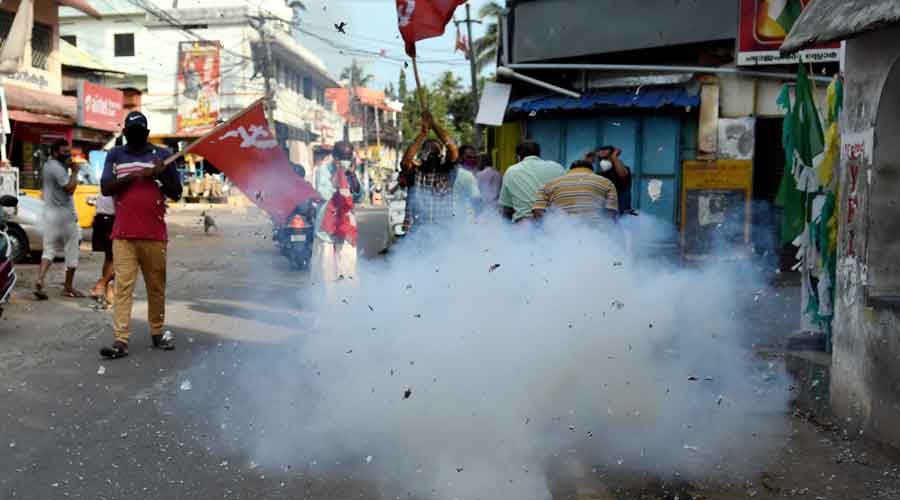 The Left Democratic Front in Kerala smashed a 44-year trend of anti-incumbency felling the ruling combine, sweeping the state elections and wresting the lone seat the BJP had won last time.

The CPM-led alliance bettered its 2016 winning tally of 91 seats to bag 99 of the 140 seats, with the Congress-led United Democratic Front bagging the remaining 41.

The BJP, which had opened its account in Kerala in 2016 with the victory of O. Rajagopal, was back to square one with V. Sivankutty of the LDF wresting the Nemom seat. The three-cornered fight for Nemom ended up in line with chief minister Pinarayi Vijayan’s words: “We will close that account this time.”

Vijayan retained his Dharmadam seat in Kannur district by a margin of 50,123 votes, a vast improvement over his 2016 winning margin of 36,905.

“This is the people’s victory,” was how Vijayan described the win. “We had all along said we will win more seats (than in 2016) as we trust the people and the people trust us. This result validates that trust,” the chief minister said.

“This election has once again made it clear that communalism has no place in Kerala,” Vijayan said, taking a swipe at the BJP that had leveraged on religious issues like women’s entry at the Sabarimala temple.

But even Sabarimala could not save the BJP as its state president K. Surendran lost from both Manjeshwar and Konni, where the hill shrine is located.

The UDF put up a dismal show to end up with just 40 seats, 13 fewer than the 2016 tally, leaving the party’s state leadership in a quandary. Leader of the Opposition Ramesh Chennithala, who retained his Haripad seat, said he would comment only after studying the results. “The Congress is the biggest political party in Kerala. We have seen defeats and victories. So the Congress cannot be wiped out with this defeat,” he added.

Health minister K.K. Shailaja, who had won accolades for handling the Nipah outbreaks and the Covid-19 pandemic, won from Mattannur in Kannur district by 61,035 votes.

“Metroman” E. Sreedharan, who had contested from Palakkad on a BJP ticket, lost. The 89-year-old retired technocrat who had declared himself as the possible chief minister if his party got a majority lost to Shafi Parambil of the Congress by 3,863 votes.