State minister B.C. Nagesh maintained that none with head scarf would be allowed to write the 2nd Pre-University Course board exams scheduled from April 22 to May 18 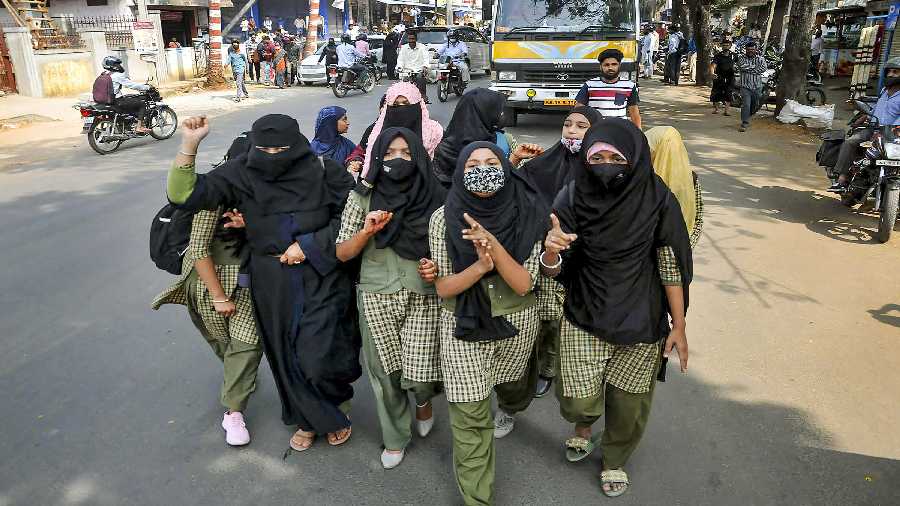 One of the students who had recently moved court challenging the Karnataka government’s order against wearing the hijab has urged the administration not to spoil students’ future over a piece of cloth after the latest decision not to allow the headscarves in Class XII examination halls.

The reaction from Almas A.H., a higher secondary student who is enrolled to take the exams starting on Friday, followed the announcement by primary and secondary education minister B.C. Nagesh that no hijab-clad student would be allowed to write the 2nd Pre-University Course board exams scheduled to be held from April 22 to May 18.

“Being Education minister, is it just for you to deny education for a piece of cloth? I had been preparing for my exams since long, all that would go in vain. Don’t do this injustice to us sir. Allow us!” Almas tweeted, tagging Nagesh.

The minister had on Tuesday said no hijab-wearing student would be allowed to appear for the exams. “Every student must follow the rule and no one will be allowed to wear the hijab during the exams,” Nagesh had said, iterating the BJP government’s position on the headscarf controversy that started in Udupi and spread to the entire state, which witnessed several days of protests.

The full bench of Karnataka High Court last month upheld the government’s hijab ban in classrooms on the ground that it was not part of Islam’s essential religious practices. The court dismissed several petitions from students, including Almas, who had sought their constitutional right to wear clothes mandated by their religion.

Some 6.8 lakh students, 3.37 lakh of them girls, are gearing up to write the 2nd PUC exams that will pave the way for their undergraduate studies, including professional courses.

Aliya Assadi, another petitioner and Class XII student, had tweeted recently drawing the attention of chief minister Basavaraj Bommai to the ban on the hijab in exam halls. “2nd PU exams are going to start from 22nd of this month. Hon’ble CM @BSBommai you still have a chance to stop our future from getting ruined. You can make a decision to allow us to write exams wearing hijab. Please consider this. We are the future of this country.”

The Muslim religious leadership in Karnataka has urged the students to follow the government order and write the exams.

“I request all of them to write the exams, even if it means removing their hijab. Let them not spoil their career,” the chief imam of the Juma Masjid in Bangalore, Maulana Mohammed Maqsood Imran, told The Telegraph on Wednesday.

“We must respect the judiciary and follow the court order even on the hijab issue. Since a special leave petition is pending in the Supreme Court, let us wait for the judgment and then see what to do,” he added.

The department of pre-university education has made elaborate security arrangements with the help of Karnataka police to ensure there are no untoward incidents during the upcoming exams. Prohibitory orders will be in place within a radius of 200 metres from each of the 1,076 exam centres, similar to the security arrangements for the Secondary School Leaving Certificate (SSLC) board exams.

A huge majority of the hijab-clad girls had removed their headscarves to write the SSLC exams after Muslim leaders, including religious scholars, had urged them not to jeopardise their careers.