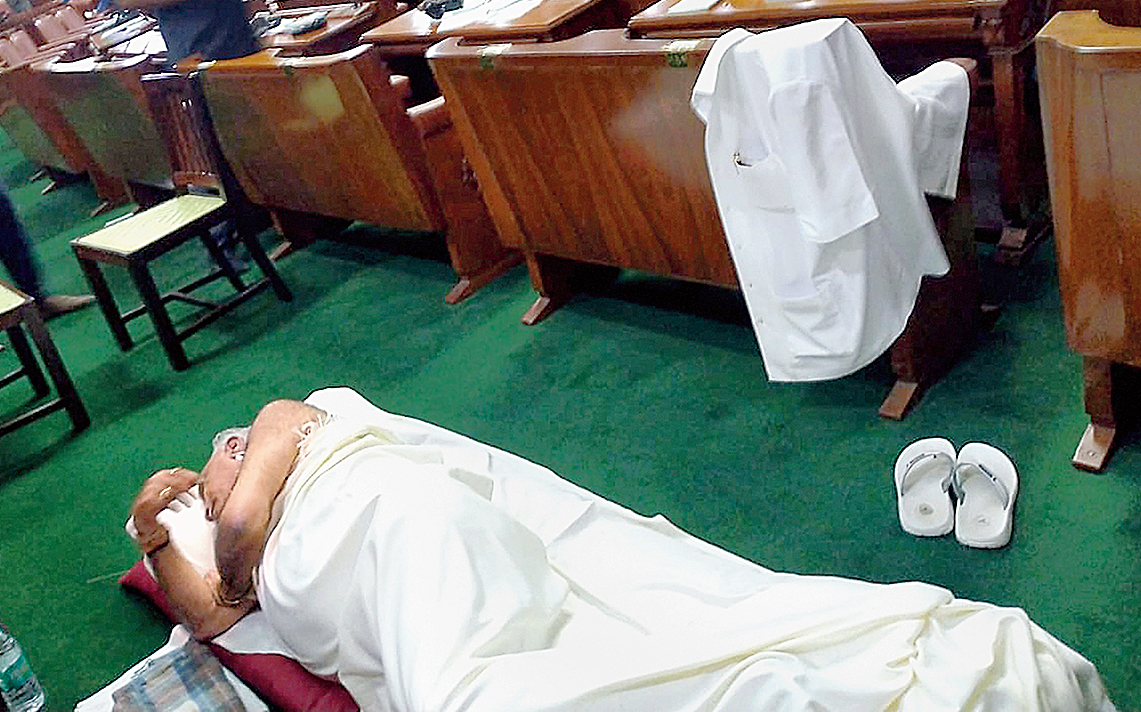 The BJP’s Karnataka unit chief, BS Yeddyurappa, asleep on the floor inside the Vidhana Soudha in Bangalore on Thursday night, his shirt hanging from a chair in the Assembly and his slippers kept neatly by the side.
(PTI)
K.M. Rakesh   |   Bangalore   |   Published 19.07.19, 09:47 PM

The BJP, impatient to seize power in Karnataka, will have to wait two more days as the Janata Dal Secular-Congress government ignored two deadlines set by the governor to hold the trust vote on Friday, and the debate on the confidence motion spilled over to Monday.

At 8.30pm on Friday, the Speaker adjourned the Assembly with several ruling alliance MLAs still waiting to speak. The House is closed on Saturdays and Sundays.

“I have respect for the governor. But the second love letter from the governor has hurt me. It seems he just came to know about horse-trading today,” Kumaraswamy said.

“Detailed debates and discussions appear to be merely to delay the floor test,” the governor wrote. “In the meantime, I am receiving various reports about the attempts being made for horse-trading. This can be averted only and only if the exercise of conducting the floor test is conducted at the earliest and without any delay.”

Vala further wrote: “When the allegations of horse-trading are widely made, and I am receiving many such complaints, it is constitutionally imperative that the floor test be completed without any delay and today itself.”

The ruling alliance has alleged that crores of rupees have been offered to their MLAs to switch sides. Fourteen of the rebel MLAs are cooped up in a hotel in Mumbai, in BJP-ruled Maharashtra.

The governor set his first deadline in a letter he wrote to the chief minister on Thursday evening, asking him to take the trust vote by 1.30pm on Friday. The intervention was highly unusual because the Assembly is in session and its proceedings are the domain of the Speaker.

As the 1.30pm deadline passed on Friday, BJP members rose to press for division even though the chief minister was still speaking.

Speaker Ramesh Kumar made it clear no member can straightaway press for division. “As per our rules, there is no provision to press for division without discussion,” he said. “I have to follow certain procedures. You cannot hurry me due to the deadline given by the governor,” Kumar added, ruling out a vote before the debate was complete.

Leader of the Opposition P.C. Siddaramiah told journalists during the lunch break: “Twenty members have sought the Speaker’s permission to speak for the motion.”

The BJP showed no interest in joining the debate. Its state unit president B.S. Yeddyurappa said he was ready to sit until midnight for the vote. “Let it happen even by 12. But I request you to complete the procedure today itself,” he said.

Siddaramiah left the ball in the Speaker’s court. “It is your decision as to how long this session will run today. But since this is a special issue, there are several people waiting to speak,” he said.

The Speaker, who said he wanted to wind up discussions, said: “How much more time do you want? Let us close it. There is no point in dragging.”

After the demand for allowing the discussions to continue grew louder, the Speaker adjourned the House till 11am on Monday.