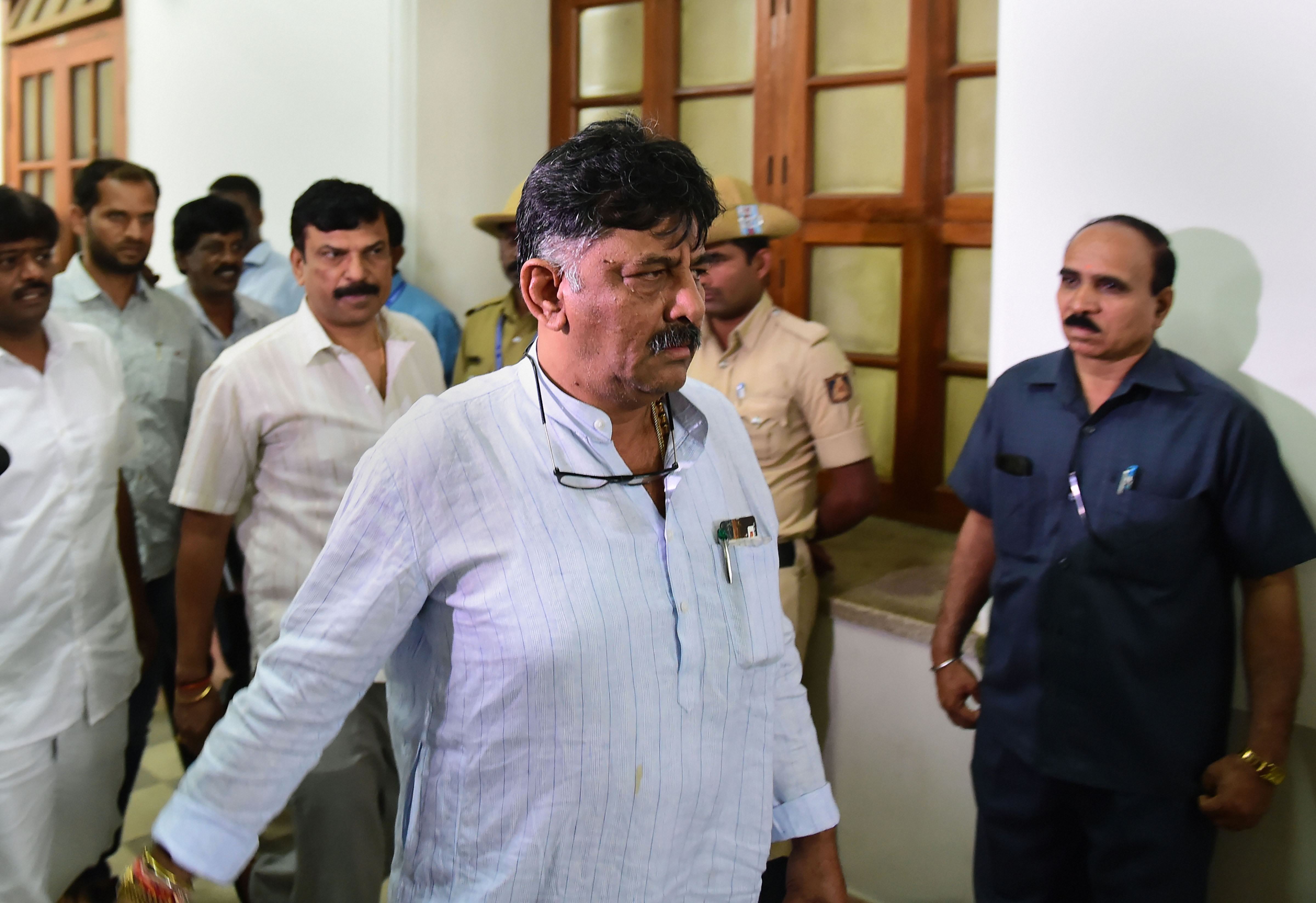 Karnataka minister and Congress leader D.K. Shivakumar arrives at Vidhana Soudha in Bengaluru on July 9. A day later, Shivakumar was outside the Mumbai hotel in a bid to meet the dissident MLAs of the Congress and the JDS, but they refused to meet him in the morning.
PTI
PTI   |   Mumbai   |   Published 10.07.19, 07:49 AM

Karnataka minister D.K. Shivakumar was on Wednesday prevented from entering the Mumbai hotel where dissident MLAs from his state were staying, but insisted on meeting them in a desperate bid to pull the Congress-JD(S) government from the brink of collapse.

Politics is an art of the possibility and he should be allowed to go into the room he had booked earlier, the senior Congress leader said as he stood on vigil outside the Renaissance Hotel in Powai that has become the epicentre of the deepening political crisis in Karnataka.

One group shouted: 'Shivakumar go back.'

As the showdown intensified, an e-mail from the hotel to a Ms Hetavi revealed a room had been booked but the reservation was cancelled due to 'some emergency'.

'As per our conversation we wish to inform you that we have reservation in the name of DK Shivakumar: REZ775665D2. Due to some emergency in the hotel we need to cancel the reservation. No charges will be applicable,' the e-mail read.

Ten of the 12 MLAs in the hotel have written to Mumbai police, saying they feared for their lives and Shivakumar should be prevented from entering the hotel. 'We have received a letter from the rebel MLAs,' a senior police official said.

Refusing to budge, Shivakumar, the Congress' troubleshooter who was accompanied by senior JD(S) MLAs, said he he will not leave without meeting the MLAs.

'I only have a heart that I have come to extend to my friends.... Politics is an art of possibility,' he said.

Shivakumar told reporters he had booked a room in the hotel but was not being permitted inside.

He added that the police was telling him no room was booked in his name, but insisted he had done so.

'I am not afraid of slogans against me... not being permitted inside because of security threat. I have a lot of respect for the Maharashtra government. I don't have weapons,' he said.

He wondered how his presence could possibly be a threat to the rebel legislators.

'How can I be a threat to the MLAs. We are friends. If the BJP is not involved, why so many policemen are here. I have a heart, and no weapons,' he said.

On his arrival, Shivakumar said, 'Let the Mumbai police or any other force be deployed. We have come to meet our friends. We are born together in politics and will die together.'

If the BJP leaders can meet rebel MLAs, why can't he, Shivakumar asked.

'Mumbai has a good government.The chief minister (Devendra Fadnavis) is my good friend. I have booked a room here. My friends are here, some disputes are there, they are my friends.... If the BJP leaders can meet, why can't we,' he asked.

Shivakumar noted that he had earlier played 'host to 120 MLAs from Maharashtra when Vilasrao Deshmukh was the chief minister'.

Twelve MLAs -- seven of the Congress, three of the JD(S) and two Independents -- are in the city since Saturday after resigning from the Karnataka Assembly membership and withdrawing support to the state's coalition government.

The legislators in their letter said they don't want to meet Karnataka chief minister H.D. Kumaraswamy or Shivakumar and requested the city police not to allow them to enter the hotel promises. The letter had names and signatures of Shivram Hebbar, Pratap Gowda Patil, B.C. Patil, Byrati Basavraj, S.T. Somshekar, Ramesh Jarkiholi, Gopalaiyya, H. Vishwanath, Narayan Gowda and Mahesh Kumutali.

The political crisis in Karnataka has also reached the Supreme Court with 10 rebel Congress and JD(S) MLAs moving a plea, alleging that the Assembly Speaker has deliberately not accepted their resignations.

A bench headed by Chief Justice Ranjan Gogoi took note of the submission of senior advocate Mukul Rohatgi, appearing for the rebel MLAs, and assured him that it will see whether their petition can be listed for an urgent hearing on Thursday.

Of the 14 MLAs who have resigned, 11 are from Congress and three from JD(S).

The ruling coalition faces the threat of losing its majority if the resignations of the rebel MLAs are accepted.

With the support of the two Independents, who on Monday resigned from the ministry, the BJP has 107 MLAs in the 224-member House, where the half-way mark is 113.

If the resignations of the 14 MLAs are accepted, the coalition's tally will be reduced to 102. The speaker has a vote.

Monsoon session of the Karnataka legislature is expected to begin on July 12.