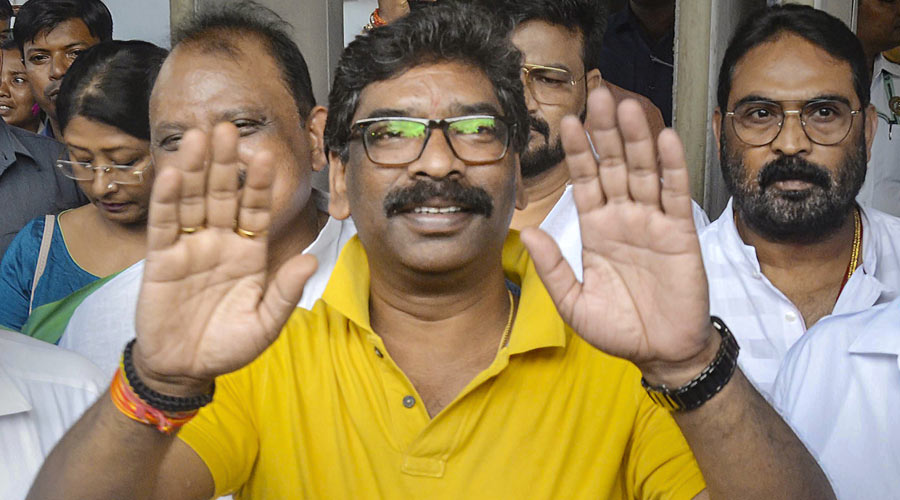 Amid the deepening political crisis in Jharkhand due to the uncertainty over Chief Minister Hemant Soren's fate as an MLA, preparations have been made to shift ruling coalition MLAs to "friendly states" like West Bengal or Chhattisgarh, if the need arises, to prevent poaching attempts by the BJP, multiple sources confirmed.

The development comes in the wake of a crisis situation in Jharkhand where a threat to Soren being "disqualified" as an MLA has arisen, while a marathon third round of a meeting of legislators of the ruling alliance is underway in the chief minister's residence to chalk out a strategy to deal with the emerging scenario.

All the ruling MLAs are attending the meeting along with their luggage, they said.

Governor Ramesh Bais is likely to send the order of disqualification of Soren as an MLA to the Election Commission of India (ECI) on Saturday, Raj Bhavan sources said.

"All arrangements to park our coalition legislators in either Chhattisgarh or West Bengal, both run by non-BJP governments, have been made. Three luxury buses have reached Ranchi to transport the MLAs and security personnel by road. There will also be some escort vehicles," a Congress source told PTI.

The source said three locations in Chhattisgarh, including Barmuda and Raipur, and some places in West Bengal have been identified.

"All ruling MLAs will be sent to a single destination if the need arises. All the MLAs have come with their luggage to the CM's house to attend the crucial meeting which is underway," another source said.

A JMM source said the option to take the legislators out of Jharkhand was open and all preparations have been made but the final decision will be taken only after the disqualification order is dispatched by the governor.

In the rapidly changing political scenario, 'resort politics' is the need of the hour to keep the numbers of the ruling alliance intact, party sources asserted.

Insiders in the Congress, a crucial ally in the JMM-led ruling coalition, had said that ring-fencing of MLAs by parking them in a resort in a "friendly state" such as West Bengal, Bihar or Chhattisgarh is being considered as an option to prevent legislator poaching by the BJP.

However, they said a decision on the future course of action can be taken once the governor communicates to them the ECI's opinion on the possible disqualification of Soren as an MLA.

Meanwhile, BJP's Godda MP Nishikant Dubey, known for his controversial remarks, tweeted: "According to Jharkhand Mukti Morcha sources, some MLAs reached Chhattisgarh at 2 am. Most of the MLAs are reluctant to go and are waiting for the orders of senior JMM leader Basant Soren. Some buses are parked in Ranchi for MLAs."

The ECI sent its opinion to Bais on August 25 on a plea seeking that Soren be disqualified as an MLA for violating electoral norms by extending a mining lease to himself.

Rural Development and Parliamentary Affairs Minister Alamgir Alam had on Friday said the MLAs of the ruling alliance cannot be poached and will stay in Ranchi.

Another minister, Mithilesh Thakur, had claimed that the ruling coalition has the magic number of "50 MLAs, which can go up to 56" while asserting that they had learnt resort politics' from the saffron party.

Meanwhile, Raj Bhavan sources said the governor may take a call by evening on the ECI views on "disqualification" of the chief minister as an MLA and send the disqualification order to the commission.

The ruling coalition has 49 MLAs in the 81-member Assembly.

The JMM, the largest party, has 30 MLAs, the Congress 18 legislators, and the RJD one. The main opposition BJP has 26 MLAs in the House.

The coalition partners had on Thursday claimed that there was no threat to the government.

The JMM had exuded confidence that Soren will remain the chief minister for full term till 2024.