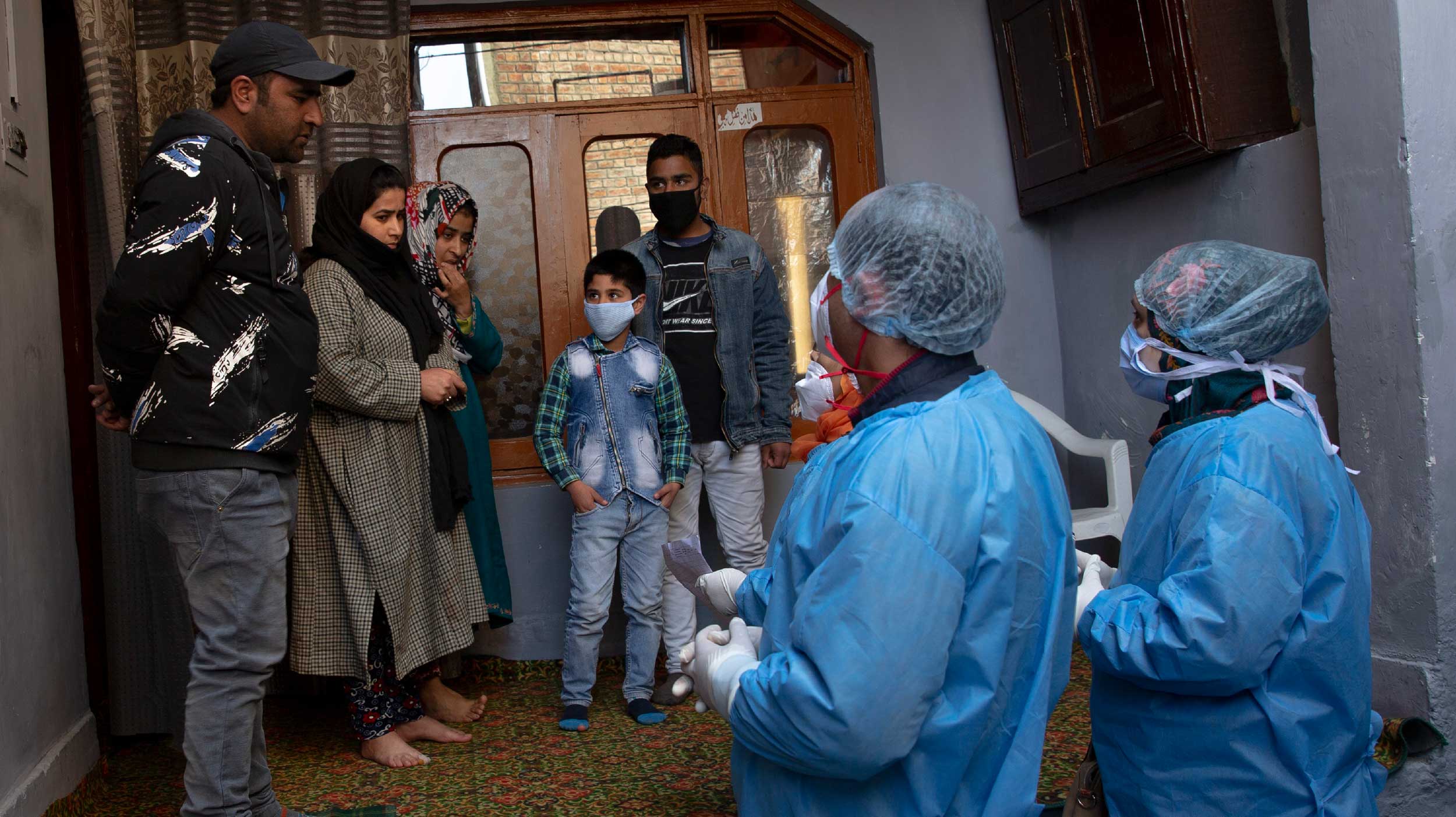 Medical workers talk to residents during the door to door campaign to check any possible contact with the woman, who tested positive to the coronavirus after recently arriving from Saudi Arabia, in Srinagar on Thursday.
(AP)
Muzaffar Raina   |   Srinagar   |   Published 19.03.20, 09:26 PM

Global rights watchdog Amnesty International on Thursday sought the restoration of high-speed 4G Internet services in Jammu and Kashmir, saying it would enable the region’s people to better fight the novel coronavirus.

A day after the Valley recorded its first confirmed case, Amnesty said the people of Jammu and Kashmir had the right to stay informed of the threat to their health and the measures taken to mitigate the risks, and to receive early warning of possible future consequences.

National Conference president Farooq Abdullah has said he has written to Prime Minister Narendra Modi seeking the return of 4G services without which, he said, the advisory to work and study from home was unfeasible.

Many others too have voiced the same demand, among them Iltija Mufti, daughter of the jailed former chief minister Mehbooba Mufti.

Parts of Kashmir, however, were under a lockdown on Thursday after a 67-year-old Srinagar woman who had returned from Saudi Arabia on March 16 tested positive on Wednesday night.

The news sparked panic and prompted the authorities to order restrictions on the movement of people and vehicles. Security forces were deployed in strength to impose the curbs. So far, three have tested positive in Jammu and eight in Ladakh, including a soldier and four members of his family.

In parts of Kashmir, many people stayed home on Thursday and shops and offices remained shut as a precaution. Unlike the past, when people would oppose any government restrictions, many social media users backed the initiative to prevent the disease spreading.

Officials said the woman had returned from Saudi Arabia after performing the Umrah, a minor pilgrimage. A large number of friends and relatives visited the family thereafter in keeping with the custom of receiving pilgrims, and tracking them all has become a challenge for the administration.

A government spokesperson said 21 medical teams had held house-to-house inspections within a radius of 300 metres around the woman’s house.

The Vaishnodevi shrine in Jammu has been closed and the entry of foreign tourists and inter-state buses banned.

Amnesty’s appeal came two days after the government extended the ban on high-speed Internet to March 26 to “prevent misuse of social media applications” and following “recent terror activities” in the region.

The rights watchdog said that “unwarranted restrictions on content and dissemination of information only stands to add to the panic” around the pandemic.

“The situation in relation to the coronavirus is constantly evolving. To ensure its full communication to the people… (the government) must urgently lift Internet restrictions… and ensure real-time preparedness of the people,” Amnesty International India head Avinash Kumar said.

“The responses to the coronavirus cannot be based on human rights violations and a lack of transparency and censorship. Human rights approach must be at the centre of all prevention, preparedness, containment, and treatment efforts to protect public health and support the most vulnerable groups.

Farooq’s letter to Modi said: “The people are being advised to work/study from home, but this is impossible with 2G Internet speed and limited fixed-line Internet penetration. I would, therefore, request you to restore 4G Internet services in Jammu and Kashmir at the earliest….”

Iltija regretted that the world was battling the coronavirus but “J&K admin still unrelenting & refuses to lift inhuman ban on 4G”.

“In times of Covid pandemic, access to Internet & info is a necessity not a privilege. Are Kashmiri lives so cheap?” she wrote on her mother’s Twitter handle.

Internet services were suspended in Jammu and Kashmir on August 5 last year along with the revocation of the erstwhile state’s special status. Recently, 2G services were restored.

The government has ordered a probe into how four foreign tourists, including two Italians, had entered the Valley on Wednesday. Officials said all four were being sent back.