He also has to pay a fine of Rs 25 lakh, which will be given to the rape survivor as a rehabilitative measure 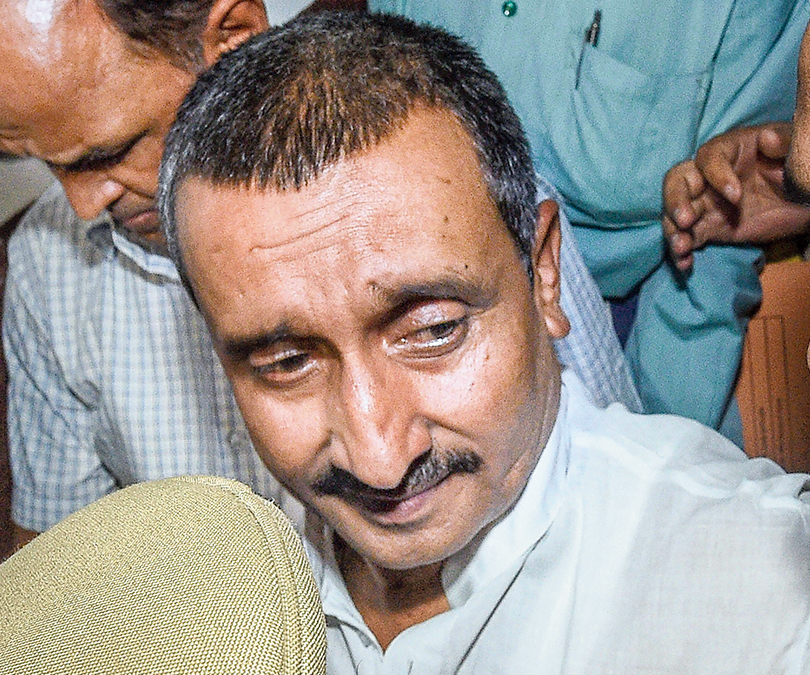 A Delhi court on Friday awarded a life sentence to BJP lawmaker Kuldeep Singh Sengar for raping a then 16-year-old girl in Unnao, Uttar Pradesh, in June 2017.

While it’s standard practice for governments to release life convicts after 14 years, the court said Sengar must be held in jail till his death. He also has to pay a fine of Rs 25 lakh, which will be given to the rape survivor as a rehabilitative measure.

District judge Dharmesh Sharma of the Tis Hazari Courts, where the case was shifted on a request from the woman, had convicted the Bangermau MLA on Monday and set sentencing for Friday.

While the BJP said it had expelled Sengar, it never gave a formal letter to the Speaker. Following his sentencing, Sengar is set to be disqualified as a lawmaker.

“Complete justice is yet to be done to me. Sengar, his family members and his goons killed three members of my family — my father, chachi and mausi — to prevent me from pursuing the case,” the rape survivor told reporters in Delhi. “These cases are still going on. Sengar should get many death sentences for these crimes.”

Friday’s sentencing marks the end of the first of five cases related to Sengar’s victimisation of the rape survivor.

One of these is a gang-rape case against Sengar, his brother Jaideep and two aides, relating to a different date. Another case relates to Sengar, Jaideep and three henchmen kidnapping the girl and forcibly marrying her off to a local youth.

In the fourth case, Sengar, Jaideep, two aides and two policemen are accused of getting the woman’s father arrested in a false case and getting him beaten to death in custody.

The last case relates to the murder of two of the woman’s aunts in a truck-car collision that left the rape survivor and her lawyer grievously injured. The accused are Sengar’s brother Manoj — who died recently — and the owner, driver and cleaner of the truck.

Judge Sharma has ordered Sengar to provide the details of his income and assets, which may be used in connection with the pending cases. The woman has alleged that Sengar had accumulated illegal wealth and used it to buy off the administration and police to victimise her and the people of the constituency.

Shashi Singh, a woman co-accused in the first case, was acquitted on Monday for lack of evidence. The rape survivor had alleged that Shashi, a political aide to Sengar, had used a job promise as a bait to take her to the MLA’s home, where she was raped. It’s to Shashi’s son that the teen was forcibly married by Sengar.

On Monday, the court had praised the rape survivor’s courage and rebuked the CBI for repeatedly summoning her to its office and questioning her without the presence of a woman, as required. The court saw this as harassment.

The hearing was conducted daily from August 5.