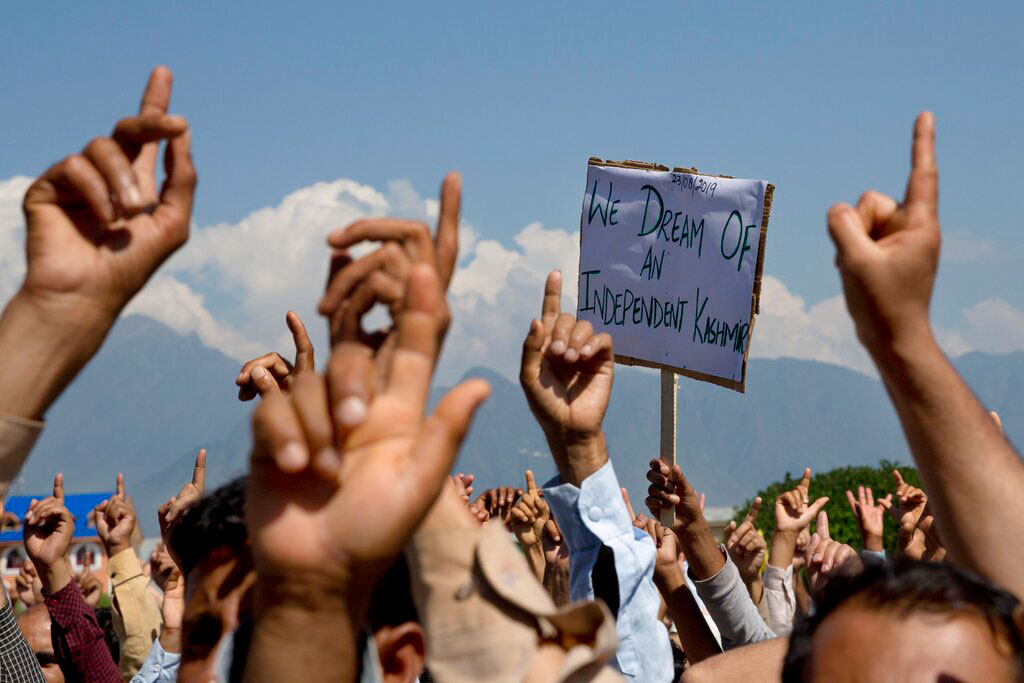 Kashmir’s policemen have been at the forefront of the battle against militants and pro-azadi mobs for decades, but that did not stop the bench of Chief Justice Gita Mittal and Justice Rajesh Bindal from passing damning remarks against the force.
(AP)
Muzaffar Raina   |   Srinagar   |   Published 11.12.19, 09:45 PM

Jammu and Kashmir High Court on Wednesday effectively expressed no confidence in Jammu and Kashmir police, urging the Centre to hand over the security of courts in the newly created Union Territory to the Central Reserve Police Force.

Kashmir’s policemen have been at the forefront of the battle against militants and pro-azadi mobs for decades, but that did not stop the bench of Chief Justice Gita Mittal and Justice Rajesh Bindal from passing damning remarks against the force.

After the revocation of Jammu and Kashmir’s special status, many policemen have been seen carrying lathis instead of firearms amid fears in the government of a rebellion. The force, however, has remained stoutly loyal to the state.

The high court on Wednesday said some recent events have shown police’s “inability” to “ensure discipline and security which must be maintained in all judicial precincts”.

“Local police is unable to manage the situation,” it said.

Notices should be issued to the Centre and the Union Territory administration to turn courts into “high security zones” and “urgently consider” to deploy the CRPF at both wings of J&K High Court in Jammu and Srinagar as well as in district courts.

The court said it is “experiencing an unusual and very serious situation,” citing two events.

One is the lawyers’ strike in Jammu against the government’s decision to transfer registration of land documents from the judiciary to the revenue department, which has hit their livelihood. The decision is in line with the practice in many states and followed from the scrapping of Jammu and Kashmir’s special status.

The call for shutdown by the Jammu Bar Association has paralysed work in Jammu courts.

The other is related to the appearance of a poster by an unknown militant group — Jammu and Kashmir Fidayeen — at a court in Srinagar, warning of suicide attacks.

The court accused the police of “reluctance to engage with (protesting) lawyers” in Jammu. “To the utter chagrin and dismay, the local police is either reluctant to engage with lawyers or is not able to control the situation,” the order reads.

The court blamed “unruly elements” for using the call for “abstention” from court “to indulge in completely unruly activities.”

There were attempts to “block the main gate, which serves as main entry for the high court as well as district court complexes”, it said. “None of these acts is tolerable,” it added.

The court said the “act of locking main door” has “dangerous consequences” and can result in “dangerous anarchy.”

“The same can endanger not only the security of judges and other persons inside the district court complex but also imperil lives in the event of untoward incidents…. Local police is unable to manage the situation,” it said.

“This is not a reflection on the ability of the police to discharge its functions but… manifests the reluctance of police to engage with the specific situation of lawyers…. The police have exhibited complete inability to physically control the situation and ensure access to the court,” it said.

The order said it was essential “that discipline and congenial atmosphere is maintained” at the courts.

On the poster that was reportedly pasted at the Srinagar wing of the high court, the order said the matter was taken up with the security agencies and security was beefed.

The lawyers in Srinagar are also boycotting courts against the scrapping of the state’s special status under Article 370. Kashmir Bar president Mian Qayoom and some other members have been arrested.

Police are deployed for frisking and other related security at courts across Jammu and Kashmir, although CRPF or BSF are deployed at strategic points.