Advertisement
Home / India / Instant triple talaq debate: The arguments for and against the bill in the Rajya Sabha 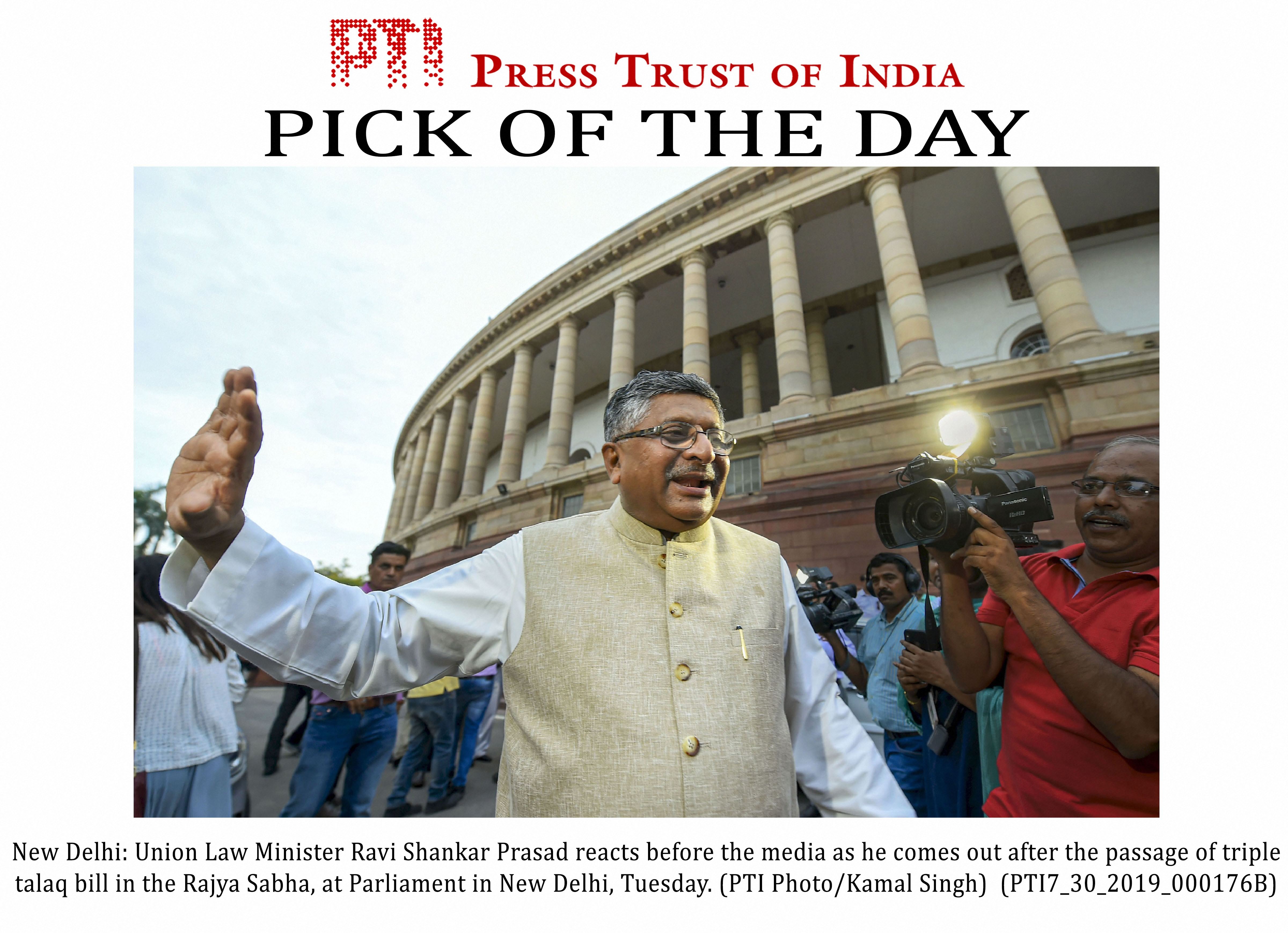 Union law minister Ravi Shankar Prasad reacts before the media as he comes out after the passage of instant triple talaq bill in the Rajya Sabha on Tuesday.
PTI
Furquan Ameen   |   New Delhi   |   Published 30.07.19, 08:26 PM

He reminded the House that a marriage in Islam is a civil contract and with this bill, the government is giving this civil contract a criminal image. “Will your government provide sustenance to these women whose husbands will be in jail. Will it spend on her child’s education?” Azad asked.

The government's stand was hypocritical, he said. “For the past five years, lynchings have been happening across the country. The Supreme Court directed that a law against lynchings should be framed. But you didn’t,” Azad said. On the one hand, the government wants to bring uniformity in personal laws but then made a law for women of one community.

The AAP MP pointed to BJP's dismal record on Muslim legislators. “Those people are concerned about Muslim women who have never, from 1952 until today, given a ticket to a Muslim woman or made her an MLA, MP or a minister,” Singh said. He asked the government, if they were so concerned about Muslim women, who woud they not give justice to Mohammad Akhlaq’s widow, to Pehlu Khan’s mother, to Tabrez Ansari’s wife and to mothers and sisters of those lynched in Jharkhand.

“In 2002, during the Gujarat riots, pregnant women’s stomachs was cut open and the child killed, did you talk about (giving them) justice?' Digvijaya said. 'Where was your love for Muslim women then?” Protest erupted from the treasury benches. Digvijaya claimed that about 20 lakh Hindu women have been deserted and asked the minister whether the government would bring a Hindu women's protection bill. “Will the minister (Prasad) advise the Pradhan Sevak of his party to give justice to the Pratham Sevika,” he asked, referring to Narendra Modi who calls himself Pradhan Sevak.

In support of the bill

Dasgupta argued that Article 44, which decided on a Uniform Civil Code, encouraged governments to take a policy of social reform. “In the 1950s, various Hindu code bills were passed, some with opposition, some with unanimity. The Special Marriage act was passed,” he said.

Talking about Muslim personal laws, he said: “It tells us that underlying this belief in secularism is also a notion of differentiated  citizenship which says that one citizen is more equal than others.”

Sinha said that those opposing the bill wanted to keep Muslim women majboor while those supporting the bill will make them mazboot.

Sinha brought up the Hindu Code Bill and said many Hindu minds had called it a doorway to destroy the Hindu religion. But the nation got together and brought the reforms and gave justice to Hindu women (a voice reminded him that it was because of Babasaheb Ambedkar). Citing J.B. Kripalani, Sinha said he called the government communal for making laws for only a section of women in the society and leaving out the other. “J.B. Kripalani was indicating this about the issue of Muslim women,” Sinha said.

Defending the bill, Ganguly said that the decision to send a man to jail or not will be in the wife’s hand, if a husband out of anger or mistake gave her triple talaq. “If there is love between them, the wife will forgive, else she can take him to a judicial magistrate,” she said.

He ended with French philosopher Montesquieu’s quote: “There is no crueller tyranny than that which is perpetuated under the shield of law and in the name of justice.”

Kareem claimed that the hidden agenda of the government was to impose the Uniform Civil Code. He called the bill discriminatory as all other marriages are dealt with in civil courts.

The government has been repeatedly saying that it is acting to uphold the Supreme Court judgment, Kareem said. “Nowhere in the 300-page judgment has the court said that instant triple talaq needs to be criminalised. Why is the government in such a hurry to make such a controversial law?” he asked.

The Muslim Women (Protection of Rights on Marriage), better known as the instant triple talaq bill, was passed by the Rajya Sabha on Tuesday.

The bill criminalises a civil offence, a point made by several Opposition leaders.

During the debate in the Rajya Sabha today, RJD MP Manoj Jha called the bill “a textbook example of dog whistle politics”. Others saw in it a ploy to bring the Uniform Civil Code and to victimise Muslim men.

Law minister Ravi Shankar Prasad argued that “when even Islamic countries are trying to change their societies for women, we are a democracy, a secular country, why shouldn’t we.' But Sanjay Raut, the MP of BJP ally Shiv Sena, said: 'This bill is just the first step, then you’ll see, Article 370 and 35A will also go.'

The Opposition members' arguments highlighted the legal complications and real-life problems that Muslim women may end up facing.

Congress MP Ghulam Nabi Azad asked: 'Will your government provide sustenance to these women whose husbands will be in jail? Will it spend on her child’s education?”

Defending the government’s bill, Prasad cited news reports in the Upper House and said that 574 cases of instant triple talaq were found, of which 101 cases occurred after the ordinance. The law, claimed the minister, is for Muslim khwateen (women) for whom a judgment was given but not implemented. “And because law is a deterrence… we shouldn’t see this issue through the lenses of politics. This issue shouldn’t be weighed on the vote bank politics scale,” he said.

A notice moved by CPI(M) leader from Kerala, Elamaram Kareem, to send the bill to a select committee was negated.

The bill outlawing instant triple talaq or talaq-e-biddat was introduced in the Lok Sabha by Prasad on June 21 and it has been passed in the Lower House.

The following are some of the points that MPs raised in the Rajya Sabha against and for briging such a law.

Yajnik reminded the house that the Supreme Court had asked for a 'thoughtful consideration' in its judgment. She said the government threw out the 'thoughtful consideration' bit and replaced it with criminalisation part, pushing an already distraught woman into the realm of criminal jurisprudence. “Now, the same woman will seek bail from the (magistrate) court for her husband, seek custody of children and maintenance,” Yajnik said.

Raut said the country should have only one law, whether for Hindus or Muslims or anyone else. “This bill is just the first step, then you’ll see, Article 370 and 35A will also go. There will be same law for all religions and castes,” Raut said at a time there is tension in Kashmir over speculation that Article 35A, which allows Kashmiris special residential status, may be repealed.


It (Muslim personal law) tells us that underlying this belief in secularism is also a notion of differentiated citizenship which says that one citizen is more equal than others.
- Swapan Dasgupta


If there is love between them, the wife will forgive, else she can take him (the husband) to a judicial magistrate
- Roopa Ganguly


For rioting, two years, for negligent driving, two years, and for even bribery there is perhaps just one year. And in this (bill), three years.... What do you want? To demonise Muslim men
- Manoj Jha


Now, the same woman will seek bail from the (magistrate) court for her husband, seek custody of children and maintenance
- Amee Yajnik


This bill is just the first step, then you’ll see, Article 370 and 35A will also go.
- Sanjay Raut


Nowhere in the 300-page judgment has the court said that instant triple talaq needs to be criminalised.
- Elamaram Kareem


Will the government criminalise love marriages too?
- Javed Ali Khan

Ravi Shankar Prasad Rajya Sabha Ghulam Nabi Azad Sanjay Raut Digvijaya Singh Instant Triple Talaq
Share
Advertisement
Advertisement