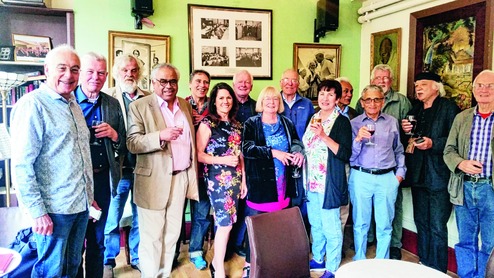 London: The Indian community in London is dismayed at Historic England's decision not to grant listed status to India Club in the Strand, London, which means the place is now likely to be demolished and turned into a swish hotel.

Historic England, which safeguards Britain's heritage, has been accused of discriminating against Indians while showing greater understanding of the UK's more assertive Muslim population.

While claiming that India Club did not occupy its current address, 143, The Strand, until 1964 - this is disputed by the club's veteran users - Historic England has seen fit to grant Grade II listed status to London Central Mosque and the Islamic Cultural Centre in Regent's Park, although it was built between 1970 and 1977.

The battle between Yadgar Marker, a Parsi who holds the lease on India Club, and the freeholders, Marston Properties, has been compared to that between David and Goliath.

Marston is now seeking planning permission from the Westminster Council to knock down India Club, a venue from where V.K. Krishna Menon and the India League once steered the battle for Indian independence.

On Thursday, a group of former students from the London School of Economics (which is just across the road in the Aldwych), now in their 70s, had a reunion lunch at India Cub.

"Dreadful," was how Steve Jefferys summed up Historic England's decision. "Anything that can be done to save the place... there is a lot of political history here."

Another former LSE student, Vijay Chand, recalled: "My father used to work in the Indian high commission. Vijaya Lakshmi Pandit used to come here when she was high commissioner. I have myself been coming to India Club since 1956. That portrait of Krishna Menon (which hangs in the restaurant) isn't just any old portrait - it was given by him."

It was announced on Wednesday that the department for digital, culture, media and sport had agreed with Historic England's advice not to list 143-145 Strand, home to the India Club restaurant and bar.

Duncan Wilson, Historic England's chief executive, said: "Following careful examination and consideration, we have concluded, regrettably, that the India Club restaurant and bar at 143-145 Strand does not meet the criteria for listing.

"India Club did not occupy the building until 1964. The club was in fact established at 41 Craven Street, which is already listed at Grade II, and has much stronger links to the historic campaign for Indian independence."

"The club moved to the Hotel Strand Continental at 143-145 Strand in 1964, meaning the building lacks a direct connection with the Indian independence movement, having been established many years after independence was achieved.

"By the time the club moved to the Strand, it was one of a great number of organisations in existence in the 1960s working to promote British-Indian relations, and supporting the Indian diaspora.

"We appreciate the applicant's desire to save the hotel and club, and the public's affection for the restaurant and its history, but listing is not designed to preserve a particular use for a building."

Asked about the decision on the Regent's Park Mosque and the apparent double standard involved, a spokesperson told The Telegraph: "The two sites are not comparable - London Central Mosque was a new build in the 1970s and built for its specific purpose. The mosque and India Club will have been assessed against different criteria according to their function.

"The age of a building is only one factor in considering it for listing. Listing primarily recognises special architectural and historic interest. Each potential listing case is treated on its own merits and the bar for listing in a national context is high."

This account is not accepted by Marker who said Historic England had ignored "accounts from individuals, including academics, who had been coming to India Club at 143 Strand since the 1950s".

"Historic England has undervalued the importance of India League's post-independence activities and it was at our premises that their new wings were operated - for example, the Research and Study Unit and the Free Legal Advice Bureau.

"We have newspaper articles and photos to prove this. They have also undervalued the cultural importance of 143 Strand.

"We would urge Westminster City Council to reject the planning application and preserve India Club for future generations."

Historian Kusoom Vadgama reflected the majority Indian opinion: "It is a sad day for Indo-British relations. India Club was a symbol of that very special relationship, going back decades, involving great British and Indian intellectuals with India and its independence at heart.

"The British occupied India for nearly 350 years and we are now having to beg for a few square feet of space for which a rent is paid, in the city of London! A great injustice is being done."