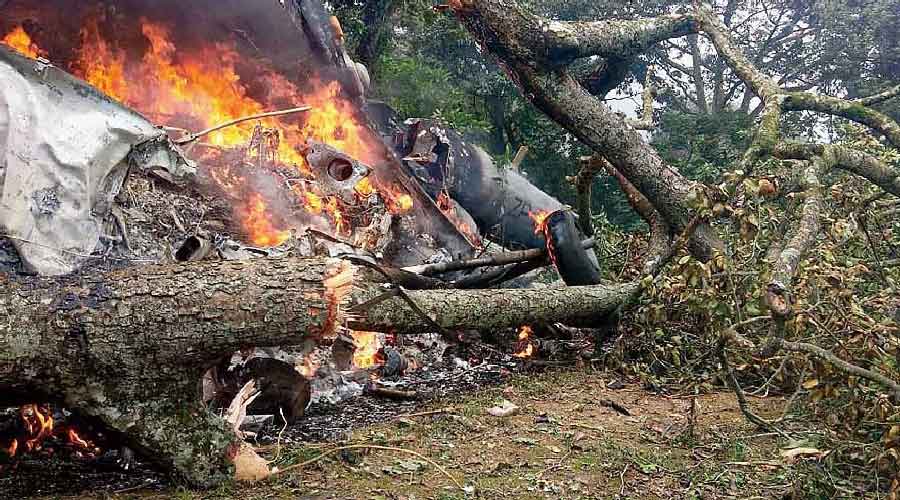 The tri-services investigation into the December 8 chopper crash that killed CDS Gen Bipin Rawat and 13 others is nearly complete and the findings are likely to be submitted to the Air headquarters next week, people familiar with the development said on Saturday.

The voluminous probe report is being finalised for submission, they said.

It is learnt that the probe team led by Air Marshal Manavendra Singh examined all likely scenarios for the crash including possible human error or whether it was a case of disorientation by the crew when the helicopter was preparing for landing.

The people said the findings of the Court of Inquiry and the procedure it followed in the probe are being legally vetted.

"The legal vetting is being done to ensure that the probe team followed all the laid down norms and procedures," said one of the people cited above.

When asked about possible causes of the crash, a number of aviation experts said there were instances of a significant number of air accidents caused by visual disorientation triggered by the loss of situational awareness by pilots.

And bad weather could be a factor contributing to the loss of situational awareness at times, said one of them while refusing to speculate on the IAF crash.

The people cited above said the probe team, led by Air Marshal Manavendra Singh, investigated all the possible angles and is finalising the report.

The report is expected to be submitted to Chief of Air Staff Air Chief Marshal VR Chaudhari in a week's time, they said.

However, there are no official details available on the matter.

The black box, comprising the flight data recorder (FDR) and the cockpit voice recorder (CVR), of the ill-fated Mi-17V5 helicopter of the Indian Air Force was recovered from the crash site on December 9.

The Chief of Defence Staff had left the Palam airbase in an IAF Embraer aircraft at 8:47 am and landed at Sulur airbase at 11:34 am. He took off from Sulur in the Mi-17V5 chopper at around 1148 am for Wellington.

The chopper crashed at around 1222 pm.

Air Marshal Singh, currently heading the Bengaluru-headquartered Training Command of the IAF, is known to be one of the best" available air crash investigators in the country.

Before taking the reins of the Training Command, the Air Marshal was the Director General (Inspection and Safety) at the Air headquarters and developed various protocols for flight safety while serving in the post.