Despite court order allowing women's entry, Kerala's LDF government says the shrine is not a ground for 'activism' 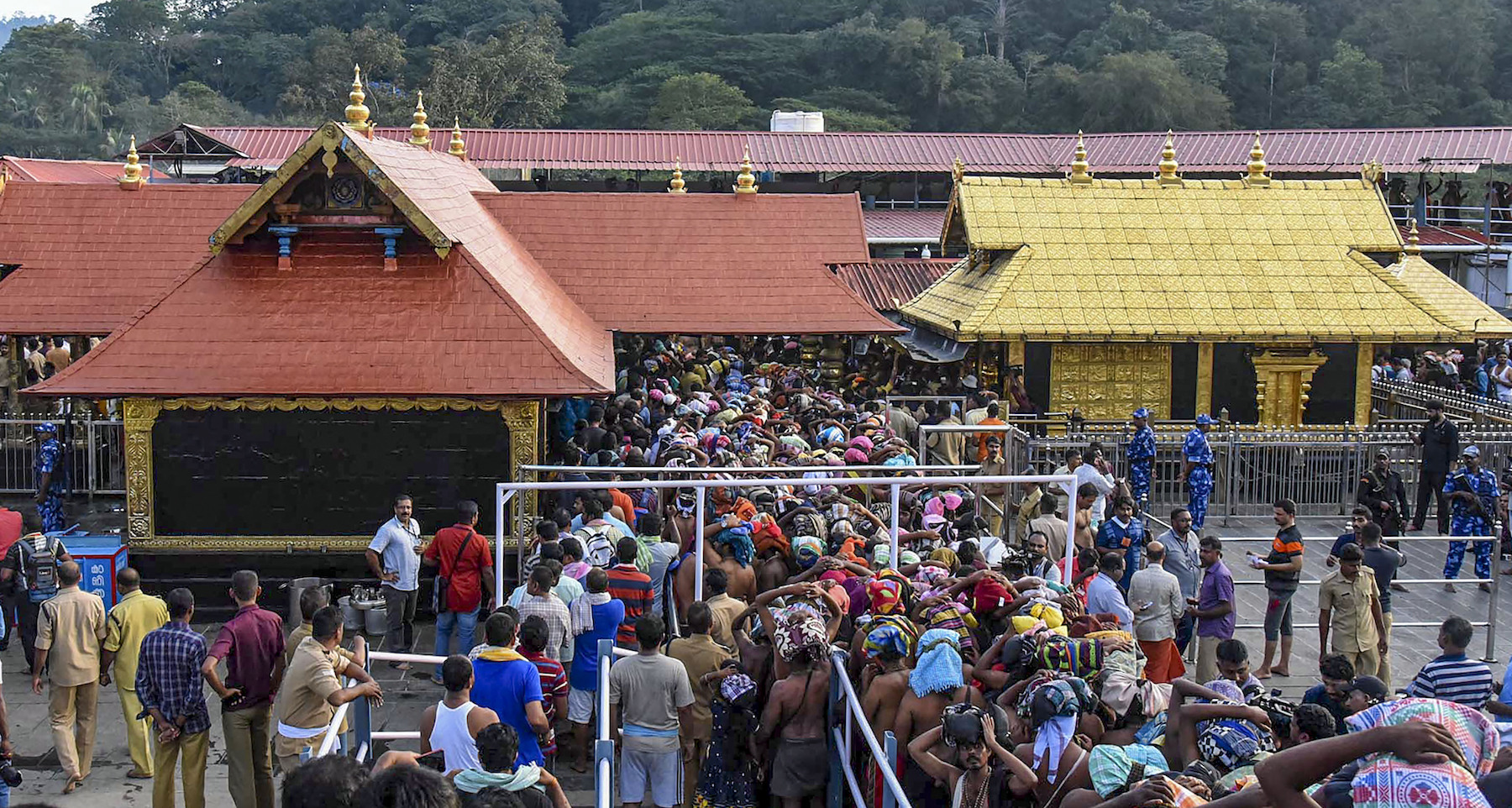 Devotees arrive at the Ayyappa temple, which opened for the two-month long Mandala-Makaravillakku pilgrimage season, in Sabarimala on Saturday, November 16, 2019. At least 10 young women who sought to offer prayers were sent back, according to the police
PTI
PTI   |   Sabarimala   |   Published 17.11.19, 06:34 AM

The Ayyappa temple here witnessed heavy rush of devotees on Sunday on the second day of the annual two-month-long Mandala-Makaravilakku puja pilgrimage season which began on November 16.

Thousands offered prayers after the chief priest A K Sudheer Namboothiri opened the sanctum sanctorum of the temple at 3 a.m and performed special pujas.

Devaswom Minister Kadakampally Surendran, Travancore Devaswom Board (TDB) President N Vasu, TDB members N Vijayakumar and K S Ravi and Devaswom Commissioner M Harshan among others were present when the temple was opened on the auspicious day, the first day of the Malayalam month of 'Vrischikom'.

The Devaswom minister has called a high-level meeting of officials of all departments at the Sannidhanam guest house today.

The first batch of police personnel took charge of the security on Saturday.

Ten Deputy Superintendents of Police, 30 inspectors, 120 Sub-Inspectors, and 1,400 Head Constables/Constables have been appointed at the Sannidhanam for the security of the devotees, apart from the ten police officials from Andhra Pradesh, 135 men from the Rapid Action Force (RAF) and a 45-member National Disaster Response Force (NDRF).

The state and temple precincts had witnessed protests by right wing outfits and BJP workers last year after the LDF government decided to implement the Supreme Court verdict of September 28 allowing women of all age groups to offer prayers at the shrine.

A five-judge Constitution bench headed by Chief Justice Ranjan Gogoi had, on November 14, in a 3:2 verdict decided to refer the issue to a larger bench to re-examine religious issues including those arising out of its 2018 verdict lifting a centuries-old ban on women of menstruating age visiting the hilltop shrine.

The apex court said the seven-judge bench that the will look into pending questions similar to Sabarimala, related to Muslim women's rights to enter a mosque and permission to Parsi women who marry outside the community to enter its fire temple, and the practice of female genital mutilation in the Dawoodi Bohra community.

Though the apex court did not stay its September 2018 order allowing entry of women into the Lord Ayyappa temple, the LDF government in Kerala this time said the shrine is not a ground for activism and made it clear it would not encourage women who want to visit the temple for publicity.

The Devaswom board, which manages temples in the state, has made elaborate arrangements to provide all possible amenities to devotees.

The unprecedented floods in August last year had played havoc with the pilgrimage season with most of the facilities for the devotees being destroyed.