Protesters outnumber audience and the police, unfavourable weather cited as the reason to cancel rally 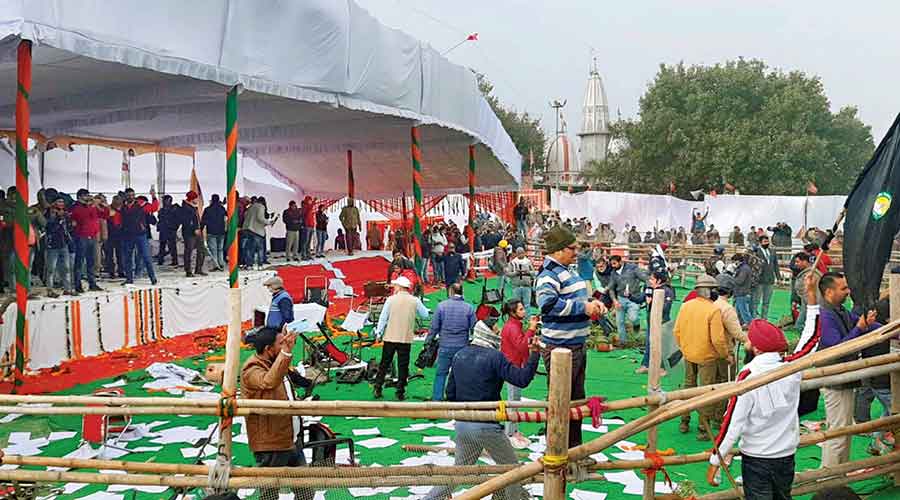 Haryana chief minister Manohar Lal Khattar had to cancel a rally in his home constituency of Karnal on Sunday after police lathis, water cannons and tear gas shells failed to keep protesting farmers away from his “Kisan Mahapanchayat”.

The BJP chief minister was to address the “Kisan Mahapanchayat” or meeting of farmers in Kaimla village to muster support for the new farm laws.

A heavy police contingent was deployed to keep farmers who are opposing the three laws from reaching the venue. The police put up a large number of barricades and fired water cannons and tear gas shells at the protesting farmers, but a large number managed to reach the village and ransacked the dais.

Khattar’s helicopter returned without landing at Kaimla, where the protesters outnumbered the audience and the police. Unfavourable weather was cited as the reason.

Later, at a news conference, the chief minister blamed Gurnam Singh Chaduni who heads the Haryana unit of the Bharatiya Kisan Union (BKU) and is part of the Sanyukta Kisan Morcha, the banner under which the farmers are agitating, for the incident.

“Today’s incident gave a message to people bigger than the one I’d intended to send out. These people have defamed the farmers because a farmer doesn’t have such a nature. A farmer can be less educated or simple, but he’s sensible,” Khattar said. 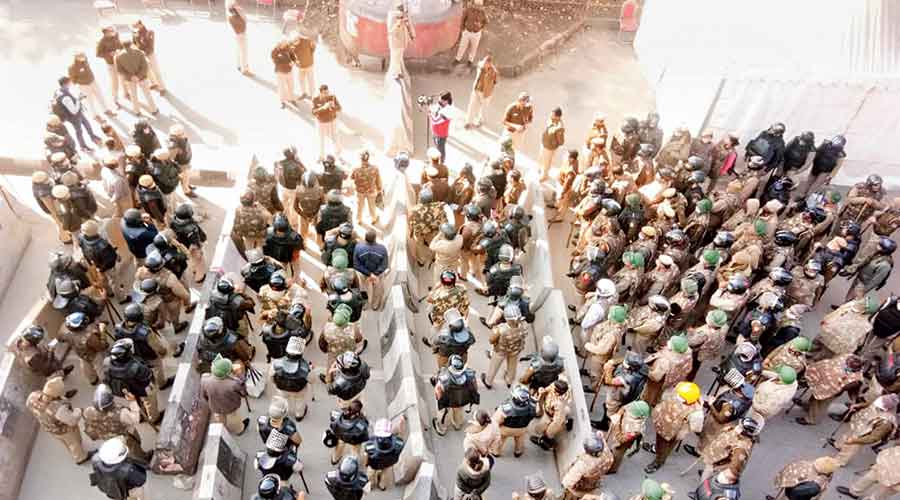 Haryana policemen in Faridabad on Sunday organised a mock drill on managing farmers’ vehicles if they try to enter Delhi on Republic Day.
(PTI)

The All India Kisan Sangharsh Coordination Committee, however, said the police had started it all, using water cannons and tear gas to disperse “farmers who had assembled to peacefully register their opposition” to the event.

It called the meeting a “bogus panchayat” convened “in support of anti-farmer laws being imposed in dictatorial way by the Modi regime”.

Protesting farmers asked why they were barred from the event if it was a Kisan Mahapanchayat. A panchayat is a meeting in a village where all sides are heard.

According to the AIKSCC, the incident resulted from a ploy devised by the administration to create a law-and-order situation and defame “the unprecedented and most peaceful movement of farmers”.

This is the second time protesting farmers have forced Khattar to cancel a rally, after digging up his helipad in village Padha about two weeks ago.

Farmers in and around Kaimla are said to have been divided over Khattar’s programme, with many demonstrating against it for the past few days with black flags and protest headbands while others opposed them.

The police had blocked the roads leading to Kaimla by putting up barricades and parking trucks. But farmer leaders, including some from the BKU, held a meeting on National Highway 44 at a spot about 10km from the village on Sunday morning and decided to go ahead with the protest.

The agitating farmers first held a tractor march in areas around Kaimla. There was considerable local support for the protesters. The police had to call in reinforcements after the farmers breached the first cordon.

As the crowd of protesters grew bigger, tear gas and water cannons were used.

But the farmers took control of the helipad and squatted on it, some of them uprooting the tiles of the helipad, a PTI report said.

State BJP president O.P. Dhankar and a few others, however, did address a group who attended the rally in support of the farm laws.

PTI added that the farmers damaged the dais, tent and speakers and broke chairs, tables and flower pots at the venue. They tore off BJP hoardings and uprooted banners.

Some local villagers and BJP workers had a face-off with the protesters. A few stones were thrown at the police, who ran for cover, the news agency reported.

Last week, the Haryana police had used tear gas to stop an attempt by protesting farmers from Rewari district to leave for Delhi to join the siege of the capital’s borders.

Earlier, protesting farmers had dug up a helipad prepared for deputy chief minister Dushyant Chautala, leader of the BJP’s coalition partner Jannayak Janta Party. Leaders of both parties have faced farmer demonstrations for over a month.

In Congress-ruled Punjab, too, a face-off was reported between the local police and farmers who were demonstrating against BJP leaders in Jalandhar city.

Haryana leader of the Opposition and former chief minister Bhupinder Singh Hooda reiterated his demand for an emergent session of the Assembly.

PTI quoted him as saying: “The Congress wants to bring in a no-confidence motion.”