Yati Narsinghanand was jailed on Saturday for objectionable remarks on women 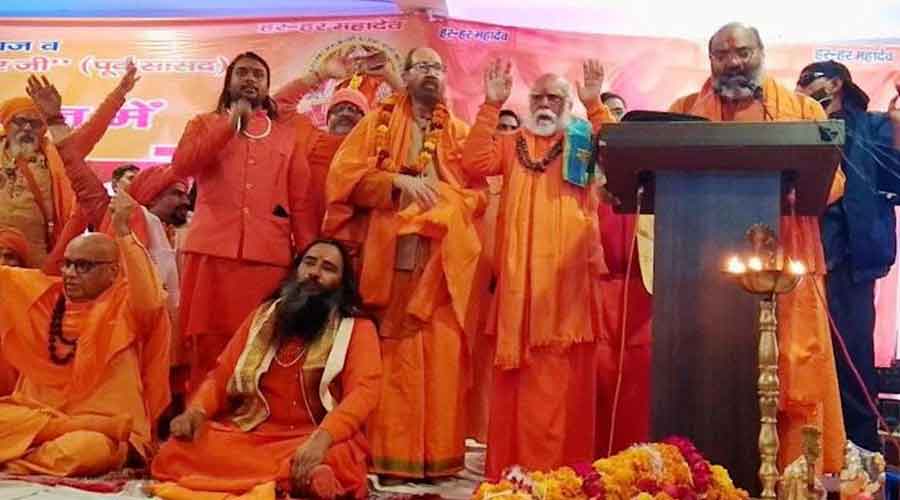 Narsinghanand is the second person to be taken into custody in the case relating to hate speeches at the Haridwar "Dharma Sansad" or religious assembly last month.
File picture
Our Bureau   |   New Delhi   |   Published 17.01.22, 03:20 PM

Yati Narsinghanand, who organised the event in Haridwar last month that called for the genocide of Muslims, has now been remanded in the Dharam Sansad hate speech case, police officials told NDTV. He was arrested two days ago in a different case.

Narsinghanand was arrested on Saturday for objectionable remarks on women. He was sent to 14 days judicial custody a day later, on Sunday. But in the remand application, Dharam Sansad hate speech case was also mentioned, police officials said.

"The charges (in the Dharam Sansad hate speech case) include 153A (promoting enmity between different groups on grounds of religion, race, place of birth, residence, language, and doing acts prejudicial to maintenance of harmony) and 295A (deliberate and malicious acts, intended to outrage reli­gious feelings of any class by insulting its religion or reli­gious beliefs)," the police official said.

Narsinghanand is the second person to be taken into custody in the case relating to hate speeches at the Haridwar "Dharma Sansad" or religious assembly last month.

Jitendra Narayan Singh Tyagi, who was Waseem Rizvi before he converted, was arrested nearly a month after the event, only after the Supreme Court intervention.

Over the last two weeks, the saffron-robed Narsinghanand has gone from cackling with cops about how a police officer "will be on our side" to cursing them - "all of you will die," he said on Thursday after the first arrest.

Clips from the Haridwar event -- held from December 17 to 20 -- were circulated on social media and drew sharp criticism from former military chiefs, retired judges, activists and even international tennis legend Martina Navratilova.

Those who organised the event and gave the hate speeches maintain that they have done no wrong.

"I am not ashamed of what I have said. I am not afraid of police. I stand by my statement," Prabodhanand Giri -- photographed often with BJP leaders including Uttar Pradesh Chief Minister Yogi Adityanath and his Uttarakhand counterpart Pushkar Dhami -- told NDTV on December 23.

Deputy inspector-general (Garhwal Range) Karan Singh Nagnyal had said the SIT, to be headed by an assistant superintendent of police, would submit its report “soon” but mentioned no deadline.

Nagnyal said the SIT probe had been ordered after “some people, including some former police officers, wrote to the government” saying they were not satisfied with the progress in the case. He did not give details.

The FIR invokes charges of promoting enmity between groups on the ground of religion, and of defiling a place of worship with the intent of insulting the religion.