The deceased was identified as Mohammad Aslam Makhdoomi (70), a resident of the Nowhatta area of the city 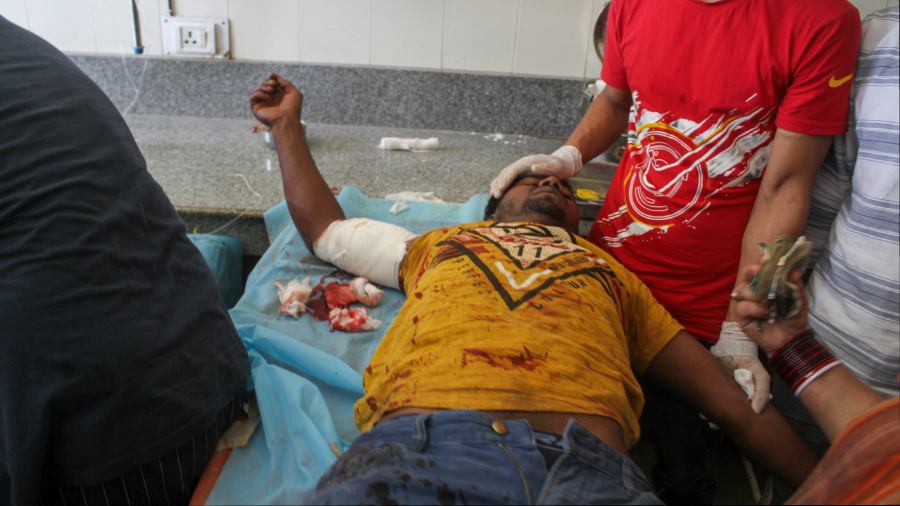 A non local labour was today injured in a granade attack at South Kashmir's Pulwama town and is being treated in district hospital.
Twitter @shakirpix
Our Bureau, PTI   |   Srinagar   |   Published 06.03.22, 08:02 PM

A civilian was killed while 24 others, including a policeman, were injured after terrorists hurled a grenade at security forces in the Hari Singh High Street locality of the city here on Sunday, police said.

"At about 4:20 pm, terrorists hurled a grenade upon police and security forces deployment at Hari Singh High Street," a police official said.

He said a policeman and 24 civilians received splinter injuries in the explosion.

The injured were rushed to the Shri Maharaja Hari Singh (SMHS) hospital, where a civilian succumbed to his injuries, the official added.

The deceased was identified as Mohammad Aslam Makhdoomi (70), a resident of the Nowhatta area of the city.

The Hari Singh High Street area has been cordoned off and a hunt launched to nab the attackers, the official said.

"I condemn this deplorable attack in the strongest possible terms. May the deceased find place in Jannat & may the injured make a complete and speedy recovery," Abdullah wrote on Twitter.

"Condemn this dastardly attack. People of J&K have been paying with their lives & sadly neither India nor Pakistan are doing anything to end the conflict & stop this bloodshed. My prayers are with the bereaved families & loved ones," Mufti said in a tweet.

"We are shocked at the extremely distressing news of a grenade attack at a crowded marketplace in Amira Kadal, Srinagar. We unreservedly condemn the dastardly and cowardly attack in which one civilian died while many are injured," the party said in a statement.

The perpetrators of the attack must be held accountable and brought to justice, it added.

"We pray for peace to the departed soul and swift recovery of those who have sustained injuries in this despicable act of violence. Our thoughts and prayers are with their families and loved ones during this terrible time," the party said.

"My thoughts and prayers with those injured in Hari Singh High Street grenade attack. Violence in any of its manifestations is unacceptable to us. I unequivocally condemn this cowardly act of violence," he said in a tweet.

Jammu and Kashmir BJP spokesperson Altaf Thakur also condemned the grenade attack and described it as a barbaric and cowardly act.

"Lobbing a grenade at a busy place is an act of frustration on part of militants," he said.

He expressed grief over the death of the civilian and prayed for the recovery of the injured.

Thakur urged the police to track the attackers and punish them sternly.