Unlike Nikhil Gowda, Prajwal Revanna shows signs of his grandfather’s knack of communicating with the electorate 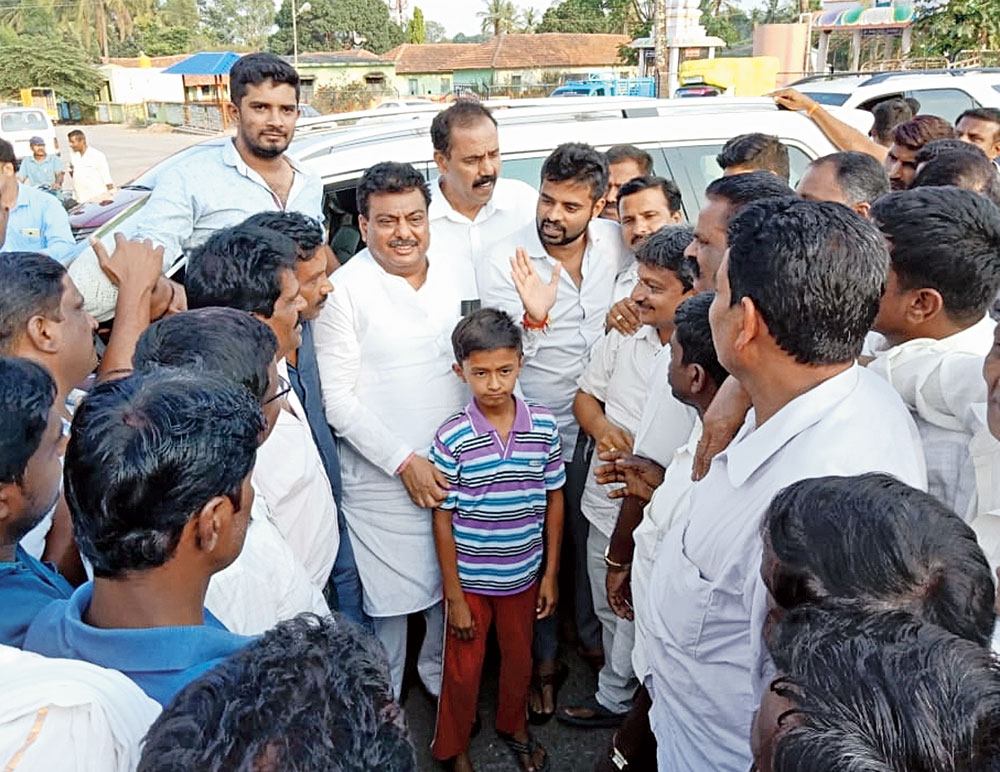 Until then just a district in Karnataka famed for its temples, Hassan grabbed national attention when Haradanahalli Doddegowda Deve Gowda took oath as the 11th Prime Minister in June 1996. Twenty-three years later, the original mannina maga (son of the soil) has left Hassan for his grandson Prajwal Revanna who is the candidate of the Janata Dal Secular-Congress alliance.

Prajwal is the son of Gowda’s eldest son and state public works minister, H.D. Revanna. Gowda, who is contesting from Tumkur, is launching his other grandson, Nikhil Gowda, son of chief minister H.D. Kumaraswamy, from Mandya, the “sugar bowl” of Karnataka. But the two youngsters seem poles apart in terms of preparedness and maturity to run from two constituencies that have been the backbone of the JDS, a party limited to the Old Mysore region.

Only these two of Karnataka’s 28 Lok Sabha seats stood with the JDS in the 2014 elections.

While Nikhil is a film actor, Prajwal has been pillion riding with his father for years. And that shows in the approach of the two young men from the Gowda clan.

Although Nikhil is facing some serious challenge from Congress rebel Sumalatha who is contesting as an Independent from Mandya, Prajwal appears better placed.

Like his cousin, Prajwal is also facing a former Congress leader. A. Manju, a minister in the previous government headed by P.C. Siddaramaiah, began gravitating towards the BJP once he realised there was no place for him in the coalition cabinet.

But unlike Nikhil, Prajwal shows signs of his grandfather’s knack of communicating with the electorate. At an election rally in Anekere village in Hassan last Friday, Prajwal rattled out names of projects his grandfather and father had undertaken for farmers and rural people in the constituency.

“Manju did nothing for you. But we have worked hard to ensure you get sufficient funds for agriculture, irrigation, road development and even renovating your temples,” Prajwal told the sizeable gathering in a resolute but slow-speaking style like the elder Gowdas.

He has even picked up certain words such as “charche” (discussion) that the Gowdas use intermittently in their speeches.

“We have to discuss what I should be doing for you.... I will never ditch you,” Prajwal told his audience, mostly farmers from the village on the banks of a huge lake that resembles a series of craters as the water level is low.

Not a single Congress flag was at his rally. Yet, Prajwal thanked the party and its leaders. “Siddaramaiah anna (brother) has offered us all help to win by a huge margin,” the young man said — obviously to keep the Congress in good humour, but also to assure the people that there was nothing to worry about the stability of the state government.

That said, the JDS has witnessed a steady outflow of mid-level leaders, some of who really matter at the grassroots.

Of the more than 16 lakh voters in Hassan, 5 lakh are Vokkaligas, 2 lakh Kurubas, 3 lakh Lingayat, 3.5 lakh Scheduled Castes, besides some Jains and other communities. Although the Congress and the JDS forged a surprise alliance to keep the BJP at bay just as the ballots showed a hung Assembly, the communities at the grassroots have not forgotten their rivalry.

“I feel it’s going to be tough for Prajwal; I see at least 40 per cent Vokkaligas too voting for BJP as they are fed up with the Gowda family,” said Narayana Gowda, a former district Congress vice-president who joined the BJP a few days ago.

Turncoat BJP candidate Manju cites Prajwal’s “inexperience” as his trump card. “People don’t want anyone from the Gowda family, that too someone with no political experience,” said Manju.

Local JDS leader Kamal Kumar had no doubt about Prajwal’s win. “Hassan loves the Gowda family that did good work for them,” said the man who was with the BJP for 28 years before joining the JDS about three months ago.