Since the JDS had already decided to field Nikhil from Mandya, the Congress was left with no option but dismiss the pleas of Sumalatha 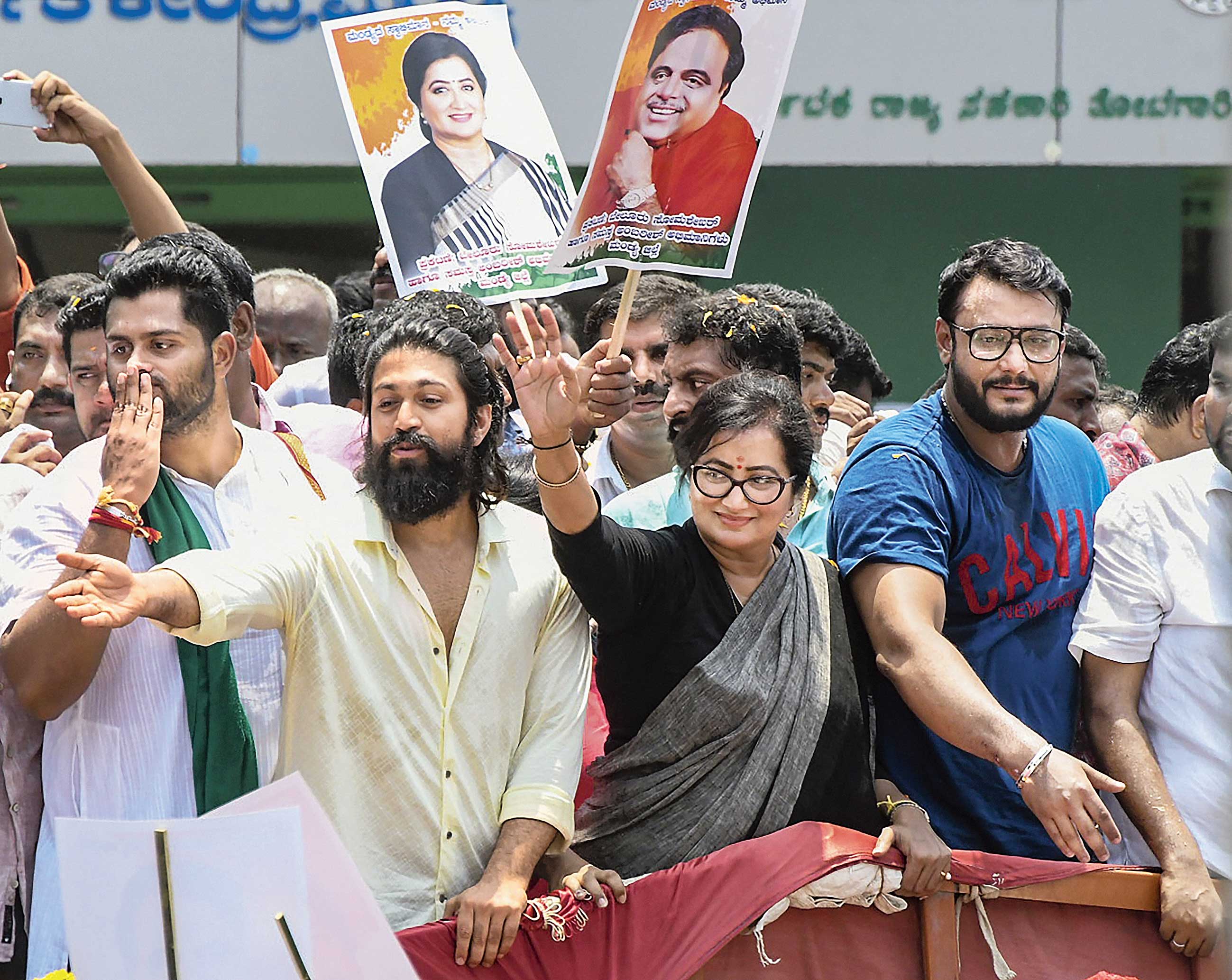 Actress Sumalatha Ambareesh waves to her supporters before filing her nomination as an Independent candidate from the Mandya parliamentary seat on March 20.
(PTI )
K.M. Rakesh   |   Mandya   |   Published 14.04.19, 01:53 AM

A closer look at Mandya in southern Karnataka would reveal the impact of the ruling Congress-Janata Dal Secular(JDS) alliance missing a golden chance to forge unity at the grassroots.

While it is up to the voters to pick the winner, not everything is fine in the constituency where the chief minister’s son is being launched after his not-so-successful acting career.

Since the JDS had already decided to field the chief minister’s son, Nikhil Gowda, from Mandya Lok Sabha constituency, the Congress was left with no option but dismiss the pleas of Sumalatha, widow of former Union minister Ambareesh.

Nikhil Gowda (third from left), Deve Gowda’s grandson and the JDS candidate for the seat, participates in a paddy-planting session in Mandya while campaigning on March 30.
(Bangalore News Photo)

Sumalatha then went around meeting top leaders from the Congress, JDS and the BJP before deciding to take the plunge as an Independent. Although the BJP has always been the third best in Mandya, the party grabbed the opportunity to extend support to the yesteryear south heroine. Coupled with the cult following for Ambareesh, once part of the triumvirate of the Kannada film industry with Rajkumar and Vishnuvardhan, Sumalatha has had a takeoff most rookies would envy.

No doubt that JDS bosses, former Prime Minister H.D. Deve Gowda and his son and chief minister H.D. Kumaraswamy, would do their best to leverage on the large Vokkaliga vote bank that has helped the party win the prestigious seat time and again. Like many in the region say, Mandya is not just a constituency but also the barometer of Vokkaliga support. The most influential community in these parts, the Vokkaligas have historically stayed with the Gowda family.

But the ground situation appears quite different this time; Sumalatha has been attracting huge crowds wherever she goes. It has been causing heartburn for the Gowdas.

While the strangest sight is Congress workers campaigning for Sumalatha along with a sprinkle of BJP cadres, the lack of Congress-JDS unity is loud and clear, at least in Mandya.

The ruling alliance, egged on by Congress president Rahul Gandhi, has done its best to reflect their partnership at the grassroots. They even promised to campaign together. But not a single Congress flag could be found at Nikhil’s roadshows.

Kumaraswamy and his son, however, looked unperturbed. They appear to have done their math on the final outcome when Mandya votes on April 18 along with 13 other constituencies in south Karnataka.

The chief minister admitted there was “some bickering” at the local level, while the state Congress leaders, including P.C. Siddaramaiah, were doing their best to ensure Nikhil’s victory.

“Some local Congress leaders are behind this,” Kumaraswamy said, admitting that these workers and the BJP, farmers’ group Karnataka Rajya Rytha Sangha and “the local media”, were backing Sumalatha.

The chief minister brushed aside suspicions about the alliance and projected a big win for his son. Being tested in the cradle of Vokkaliga politics, 29-year-old Nikhil sounded confident. “Film is my passion, but politics runs in the family and I am here to win,” he replied boldly when asked about his decision to take the plunge without climbing up the ladder.

He even had a quick fix for his inexperience in politics. “I have an encyclopaedia at home in my grandfather,” he said, alluding to Gowda.

Sumalatha was candid, admitting that she was “pitted against a formidable opposition”. She was aware about the strength of the JDS in this belt. “With all eight of the MLAs, three of them ministers, and the (Gowda) family’s might, it is a tough fight,” she told a group of reporters.

But she couldn’t hide the thrill of creating a buzz with the help of the motley crew comprising her husband’s die-hard fans, Congress rebels, BJP and the farmers’ group. “I have already won a lot of hearts,” gushed the actress who in her prime did win millions of hearts across the south.

In the bargain, the Congress has lost some influential local leaders who have traditionally been the mainstay of the party in Mandya.

B. Rajashekar, a former taluk panchayat president in KR Pet in the district, even welcomed any disciplinary action. “Let them do what they want,” was his curt answer when asked if he feared suspension for supporting Sumalatha and not Nikhil.

“We know what the local reality is, not them,” Rajashekar said indicating how badly the state leaders misjudged the sentiments of the people who wear pride on their sleeves.

N. Cheluvarayaswamy and Narendraswamy were among the other Congress leaders who were sulking despite Siddaramiah cajoling them to action.