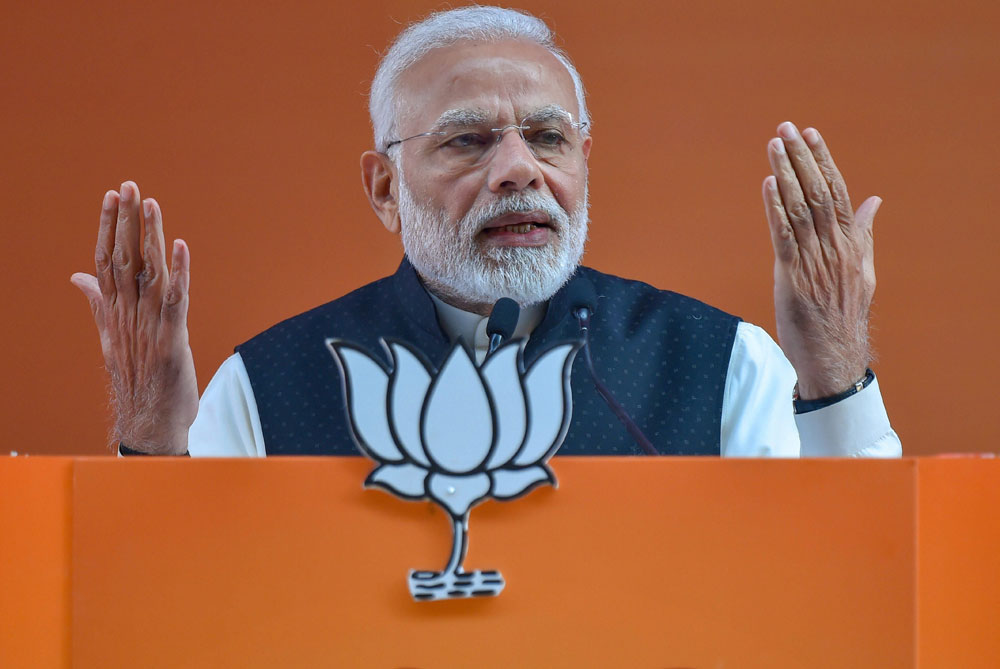 Addressing the BJP national convention, PM Modi said the Karnataka chief minister was being treated as a “clerk” by the Congress and claimed Kumaraswamy had said so.
(PTI)
J.P. Yadav   |   New Delhi   |   Published 14.01.19, 10:15 PM

BJP leaders are forecasting a “significant development” in Karnataka, which is being read as a signal that an operation is under way to break the Congress-Janata Dal Secular alliance in the state as part of the strategy for the general election.

Karnataka is the only southern state where the BJP can hope to win a sizeable number of Lok Sabha seats. But achieving that would be tough if the Congress-JDS alliance remains intact, party leaders said, hinting at a “significant development” in Karnataka politics in a couple of days.

“We are preparing for the Lok Sabha elections, and you can expect some significant development in that direction in Karnataka,” a BJP leader associated with the state said.

He claimed that a few Karnataka Congress MLAs, who are upset with the H.D. Kumaraswamy government in the state, might turn up in Delhi and get in touch with the BJP leadership.

Three Congress MLAs have been “missing” from Karnataka for the past three to four days, prompting the party to accuse the BJP of trying to lure them away.

Indications of a political churning in Karnataka were visible in Delhi too. The BJP’s lawmakers from the state, led by strongman B.S. Yeddyurappa, were in Delhi for the party’s national convention. On Monday, the MLAs were suddenly moved to an undisclosed location — to hotels at Gurgaon in BJP-ruled Haryana, sources claimed.

Yeddyurappa said he was ensuring the party MLAs stayed united and alleged that Kumaraswamy was trying to poach on them. “Our Kalburgi MLA was promised money and ministership,” he claimed.

This is a strategy to claim innocence if accused of trying to destabilise the Karnataka government, sources hinted.

The BJP is keen to maintain its 2014 tally of 17 of Karnataka’s 28 seats since it has little hope of making gains in any other southern state, sources said. An indication of the losses it could suffer in the Lok Sabha polls at the hands of a united Congress-JDS alliance came when it recently lost its stronghold of Bellary in a by-election.

Even if the BJP fails to break the alliance, party managers desperately want the two partners to start bickering in the run-up to the polls, hoping it would turn the voters towards the BJP. Led by Prime Minister Narendra Modi, BJP leaders have been harping on how the state’s coalition government has “betrayed farmers” and how Kumaraswamy is being “insulted” by the Congress.

Addressing the BJP national convention, Modi said the chief minister was being treated as a “clerk” by the Congress and claimed Kumaraswamy had said so.

The chief minister denied Modi’s claim and said he was “amused” the Prime Minister was referring to a comment he had never made. The BJP’s expansion plans in the south received a blow when it lost the 2018 Karnataka election. Its hopes of securing a credible ally in Tamil Nadu too have been dashed. The DMK has joined the Opposition while the AIADMK, considered a friendly party, appears deterred by the 10 per cent economic quota in favour of the upper castes.

In Kerala, the BJP cannot hope to win a Lok Sabha seat yet for all its fanning of the Sabarimala controversy.

In Andhra Pradesh, the Telugu Desam has walked out of the NDA and joined hands with the Congress. The BJP is eyeing a post-poll alliance with the YSR Congress and the Telangana Rashtra Samiti in Andhra and Telangana, respectively.

But if the BJP fares poorly in the general election, these two can well swing towards the Opposition, instead.