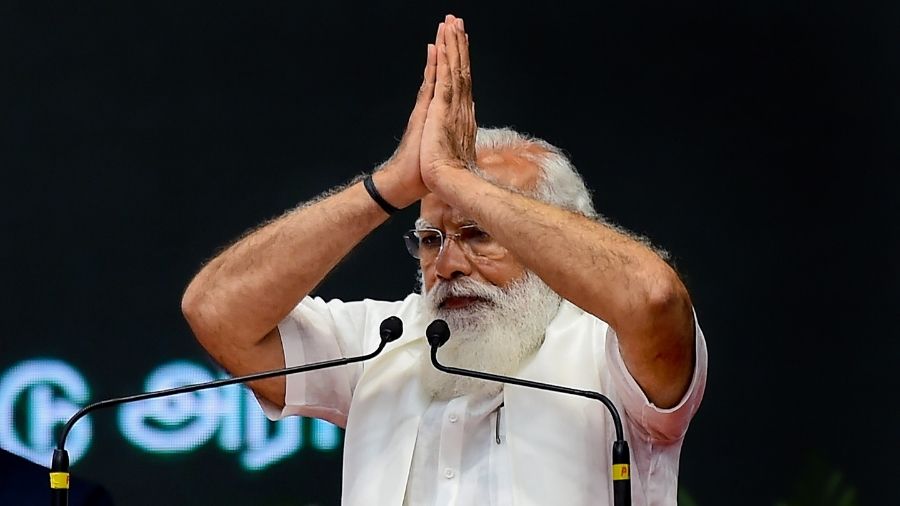 Prime Minister Narendra Modi on Sunday said his government has always taken care of the welfare of Sri Lankan Tamils and 'consistently' flagged the issue of their rights with the leaders in the island nation.

India was always committed to ensuring that the Tamils there lived with equity, equality, justice, peace and dignity, he said here, after launching various government projects in railways and defence sectors.

Modi recalled the various welfare initiatives taken by the Centre in the housing and health sectors aimed at benefiting the Lankan Tamils, and said he was the first Indian Prime Minister to visit Jaffna (in 2015) in northern Sri Lanka.

"Our government has always taken care of the welfare and aspirations of Tamil brothers and sisters in Sri Lanka. It is my honour to have been the only Indian PM to visit Jaffna.

Through development work, we are ensuring the welfare of the Tamil community," he said.

India has constructed 50,000 houses for displaced Tamils in north eastern Sri Lanka and another 4,000 in the plantation areas while "we hope to open soon" the Jaffna Culture Centre, he added.

"The issue of Tamil rights has also been taken up consistently with Sri Lankan leaders. We are always committed to ensuring that they (Tamils) live with equity, equality, justice, peace and dignity," Modi said.

The Sri Lankan Tamils issue has always had an emotional connect in Tamil Nadu and has often dominated the political space here.

He pointed to India's efforts in railway projects for Jaffna and Mannar, air connectivity from Chennai to Jaffna and the initiatives in the health sector.

Modi also said the country was proud of its security forces, as he paid tributes to the CRPF jawans who were killed in the terror attack in Pulwama district of south Kashmir in February, 2019.

"No indian can forget this day. Two years ago, the Pulwama attack happened. We pay homage to all the martyrs. We are proud of our security forces and their bravery will continue to inspire generations," he said at the function.

He said the country's armed forces had shown time and again they were fully capable of protecting "our motherland".

Forty CRPF personnel were killed in the terrorist attack carried out by Pakistan-based terror group Jaish-e-Mohammad in Pulwama on February 14, 2019.

"They have shown time and again that they are fully capable of protecting our motherland. Time and again they have also shown India believes in peace, but India will protect sovereignty at all costs. Sainya shakti and dhairya shakti (strength and courage) of our forces are remarkable," the PM said.