Governor invites Jaganmohan Reddy to form next govt in Andhra 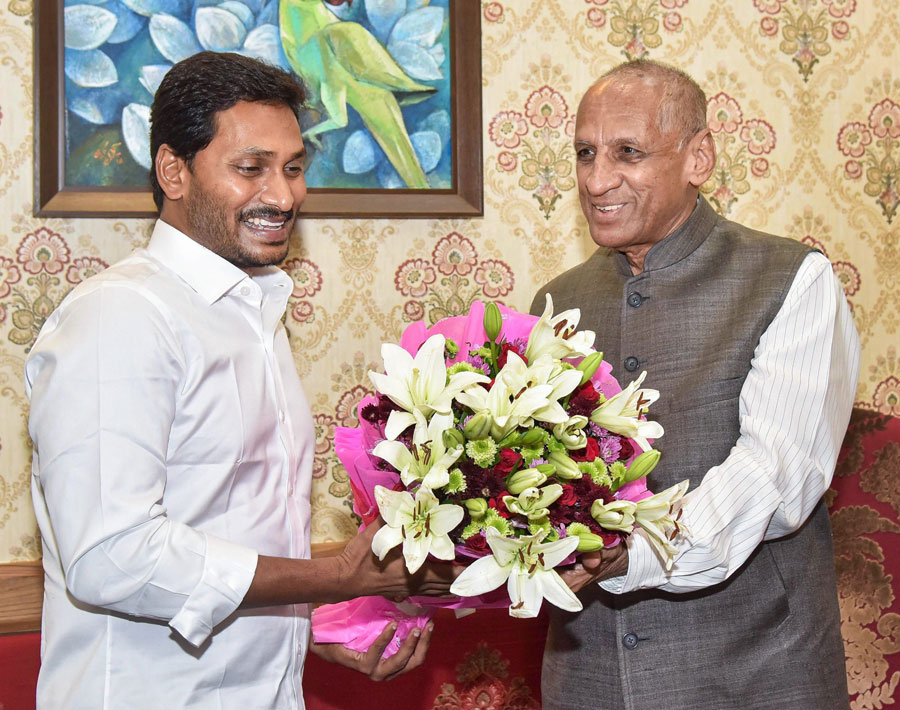 Governor ESL Narasimhan on Saturday invited YS Jaganmohan Reddy, who led his party to a thumping win in both Assembly and Lok Sabha polls in Andhra Pradesh, to form the next government in the State.

The swearing-in ceremony would be held at Indira Gandhi Municipal Corporation stadium, Vijayawada, on May 30 at 12.23 PM, a Raj Bhavan communique said.

After he was elected leader of the YSRC legislature party, Reddy met the Governor of Andhra Pradesh and Telangana and staked claim to form the government.

Reddy is scheduled to meet Prime Minister Narendra Modi in the national capital on Sunday.

The meeting assumes importance as the YSRCP chief during the election campaign had said his party would support whoever promises Andhra Pradesh the Special Category Status.

Armed with the resolution unanimously electing him as the YSRCLP leader, Reddy met Governor Narasimhan at the Raj Bhavan in Hyderabad and staked claim to form the government.

'While congratulating Y S Jaganmohan Reddy on his election as the Leader of YSR Congress Legislature Party, the Hon'ble Governor has invited him to form the government,' a Raj Bhavan communique said.

The communique said Botcha Satyanarayana and other YSR Congress elected members of the Andhra Pradesh Legislative Assembly called on the governor and informed him about Reddy's election as YSRC Legislature Party leader.

Reddy, who reached Hyderabad by air from Vijayawada, met the governor around 4.30 PM, official sources said.

After his meeting with the governor, Reddy called on Telangana Chief Minister K Chandrasekhar Rao at Pragati Bhavan, the latter's official residence in the city.

The YSR Congress chief would stay at his home here for the night, sources said.

Earlier, at the meeting of the newly elected MLAs at the YSR Congress office in Vijayawada, a resolution was adopted electing Reddy as the legislature party leader, the party sources said.

Thanking the MLAs for electing him as the legislature party leader, Reddy said, 'In 2019, people voted for us out of faith and belief, in 2024 they should give us a bigger mandate because of our performance.'

He also sought the support of the MLAs to help him earn the 'performing Chief Minister' tag within a year, a YSRC legislator told PTI.

In a spectacular performance, Reddy, son of late Chief Minister Y S Rajasekhara Reddy, led his YSR Congress to a landslide, winning 151 of 175 Assembly seats in Andhra Pradesh, the elections for which were held on April 11.

While the TDP headed by N Chandrababu Naidu got 23 seats, the Janasena party had won only one seat.

The YSRC had bagged 22 of the 25 seats in Lok Sabha elections while the TDP managed to get only three seats.

After the YSRCLP meeting, its parliamentary party meeting was held, where Reddy stressed on the need for raising various demands of the southern state in Parliament by both the party's Rajya Sabha and Lok Sabha members.

'We have been advised to stay committed and united for the demand for special status and other provisions in AP Reorganisation Act,' a newly-elected MP, Gorantla Madhav, told reporters.

During the election campaign, Reddy had also expressed his willingness to support any party at the Centre that would grant special status to the state.