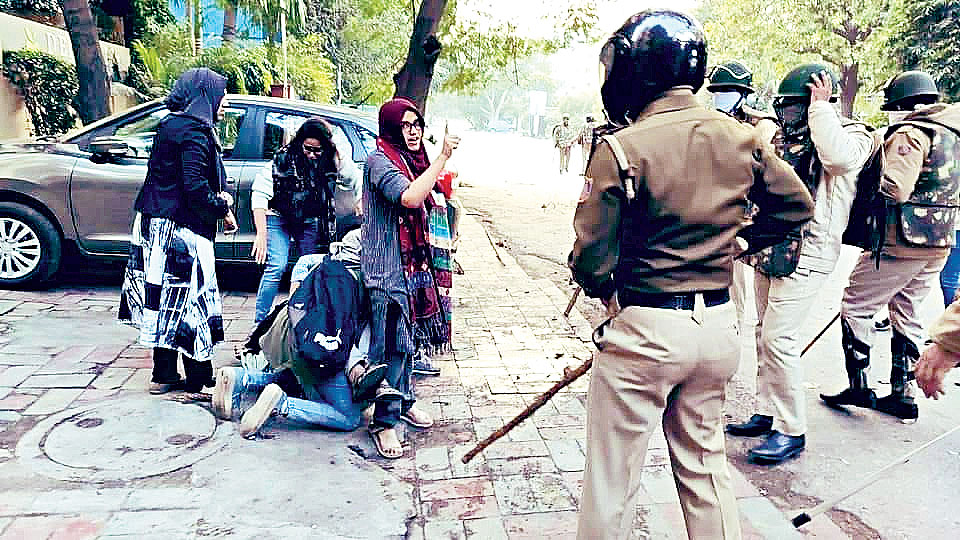 The image of a woman in a maroon hijab, right index finger raised to warn a policeman not to hit a man crouching behind her, has taken social media by storm.

Posters printed in solidarity with Jamia Millia Islamia students, who faced a police rampage on Sunday, feature a sketch of the bespectacled Farzana facing the baton-wielding, helmeted officer.

Farzana, member of the Jamaat-e-Islami Hind’s Girls Islamic Organisation, is a 22-year-old BA Arabic student at Jamia. The woman from Kannur in Kerala has degrees in economics and sociology.

Farzana rose to prominence after taking part in a successful agitation against Israeli participation in an event on the campus.

On Sunday, Farzana had been part of a protest march against the amended citizenship law from Batla House to Parliament, which was stopped near Mathura Road.

Chanda Yadav, one of the women students in the image that has gone viral, said Farzana and the others had tried to make their way through the New Friends Colony only to face a lathi-charge. They then hid in the garage of a bungalow.

When the police discovered them, the cops pulled out journalism student Shaheen Abdulla and thrashed him till he bled from his face. Farzana, Chanda, Ayesha Renna and Akhtarista formed a ring around him to shield him.

“I shouted at a plainclothes man who was hitting us: ‘Stop! If you want then call women police’. He backed off. The other policemen too backed off after beating us for five minutes…. We saved him because what is wrong is wrong and this country is for everyone,” Chanda said.