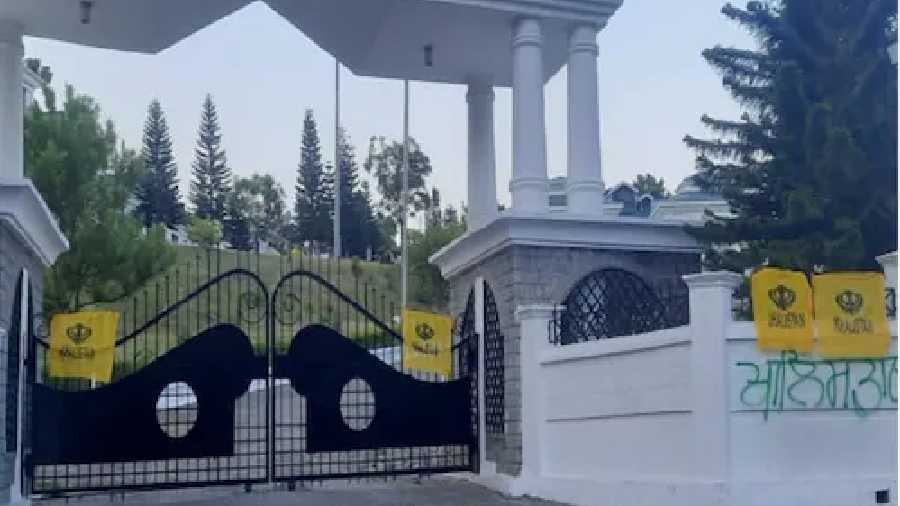 Visuals from outside Himachal Pradesh Assembly gate indicate Khalistan flags that have been put up in the region
File Picture
Our Bureau, PTI   |   Shimla   |   Published 08.05.22, 11:08 PM

The Himachal Pradesh Police booked Sikhs for Justice leader Gurpatwant Singh Pannun under anti-terror law UAPA and sealed the state's borders after Khalistsni flags were put up on the gates of the state assembly complex in Dharamshala on Sunday.

Himachal Pradesh police chief Sanjay Kundu also ordered the sealing of the state's border and beefing up of the state-wide security, citing pro-Khalistan activities in the state and the banned outfit's announcement of a Khalistan referendum day on June 6.

The sealing of the border implies strict checks on vehicles and people entering the hilly state, police said.

HP Director General of Police Kundu said Pannun has been booked as the main accused under section 13 of the Unlawful Activities Prevention Act and sections 153 A and 153 B of the India Penal Code, besides section 3 of the HP Open Places (Prevention of Disfigurement) Act, 1985.

While section 13 of the UAPA pertains to the offence of inciting or abetting terror acts, sections 153 A and 153 B of the IPC deal with the offences of promoting communal or sectarian divides and animosity.

Kundu said the FIR against Pannun and others was lodged on the complaint of Ram Chand alias Ajay Kumar of Kaned village under Dharamshala tehsil of the Kangra district.

In a statement here on Sunday evening, the DGP said, "Gurpatwant Singh Pannun, the general counsel to Sikhs for Justice has been made the main accused in the case.

The case was lodged at Dharamshala police station, he added.

The HP DGP also set up a seven-member Special Investigation Team to expeditiously investigate the case involving the putting up of Khalistani banners and scrawling of pro-Khalistan slogans and graffiti over the outer walls near the main gate of the Himachal legislative assembly complex Tapovan in Dharamshala.

The SIT has been directed to take up the investigation of the case immediately and carry out a professional and impartial investigation to ensure transparency, the HP police chief said.

The SIT has also been directed to contact with the state and central intelligence agencies to unearth the inter-state and international linkages if any, he added.

Kundu also ordered to seal the state's border and beef up security at crowded and sensitive places in Himachal Pradesh.

The HP DGP also asked the various field formations of the HP Police to remain on high alert in view of the incidents of Khalistani elements in the neighbouring states and also that of the putting up of a Khalistani banner in the Una district on April 11.

His directions followed also in view of the incident of hoisting banners and graffiti of Khalistan on the outer boundary of Vidhan Sabha in Dharamshala as well as the threat posed by SJF's announcement of June 6 as the voting date for Khalistan Referendum in Himachal Pradesh.

Additional DGP-CID, range IGs and DIGs and district police chiefs too have been directed to seal all interstate borders/barriers and keep a strict vigil at the places of probable hideouts i.e. hotels and inns of criminal elements, he said.

They have been directed to keep the special security units (SSUs), bomb disposal squads and quick reactions teams (QRTs) in position and on high alert and strengthen the security of dams, railway stations, bus stands, towns, government buildings and vital installations, said Kundu.

The HP police chief also directed various field formations to sensitise all the security staff/chowkidars of government buildings, banks, PSUs about the threat and to advise them to report any matter of concern to the local police station immediately.

Pannun had earlier also called for hoisting the Khalistani flag in Shimla on April 29.