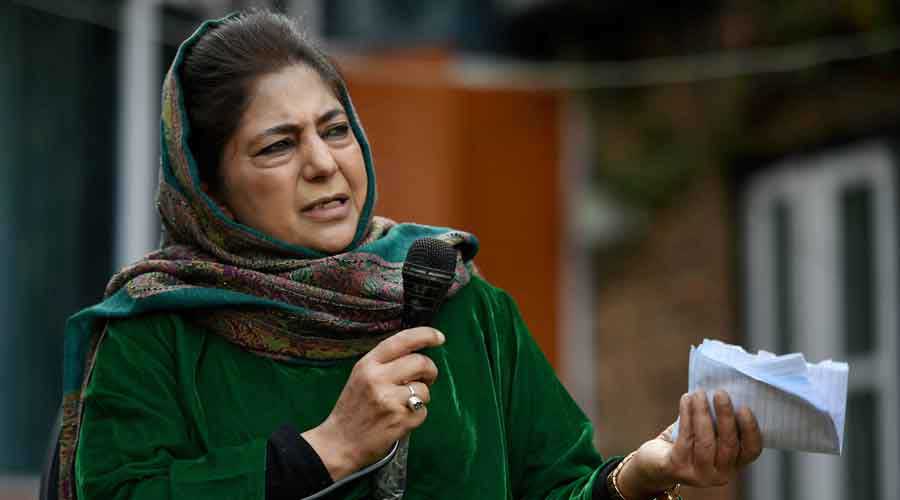 Security forces on Thursday foiled the first demonstration by any mainstream political party in the Valley since the August 5 clampdown last year, amid speculation that the National Investigation Agency’s renewed crackdown was aimed at scaring the usual suspects off protesting the new land laws.

Former chief minister Mehbooba Mufti taunted the Centre after protesting leaders and activists of her People’s Democratic Party were rounded up from Srinagar’s streets, challenging it to take on China and not the “helpless people of Kashmir”.

Many in Kashmir suspect that the Centre has unleashed the NIA to prevent protests against the new laws that allow land sale to “outsiders”. The anti-terror agency’s past raids and arrests are believed to have averted large-scale protests against the scrapping of Article 370 last year.

Now, with tensions flaring across Kashmir and Jammu after the Centre sanctioned the new land laws on Tuesday, the NIA is back in action.

On Wednesday, it carried out raids on journalists, human rights defenders and charities. On Thursday, it raided nine Valley premises including those of charities and trusts such as the Falah-e-Aam Trust, Human Welfare Foundation and the J.K. Yateem Foundation. The agency claims some organisations are collecting terror funds locally and abroad.

When the PDP tried to protest the new land laws and the NIA’s “intimidatory tactics” — breaking a 15-month lull in political agitations — the security forces arrested the participants and sealed the party office.

“People in Jammu are free to protest but no protests are allowed here. We wanted to (stage the demonstration) so that people gave up their fear,” a PDP leader said.

Protests have hit the Hindu heartland in Jammu where many believe the new laws are an assault on the Dogra identity.

Mehbooba was prevented from visiting the Kothi Bagh police station, where PDP leaders had been detained, prompting her to say the Centre had turned the Valley into a jail but was unable to fight the Chinese.

“Every day the BJP says the situation is normal and they don’t even allow a former chief minister to visit a police station,” she said.

“Go and get the land occupied by China, which has killed so many of our jawans. No, the BJP can’t and won’t do this because it can’t overpower China. It is instead suppressing the helpless people of Kashmir.”

Mehbooba accused the BJP government of looking to “rob” Jammu and Kashmir of its resources and wage cultural aggression against the Kashmiris and Dogras.

“Kashmir has been turned into a jail. They don’t allow anybody to express himself. Neither journalists nor civil society members are allowed to talk. Voices of dissent are curbed,” she said.

“People in Bihar demand jobs and food from the BJP and this party tells them to go to Kashmir and purchase land there. The BJP can’t think beyond elections. It is fooling people and using Kashmir in every election.”

“Cursed is anyone who is fighting for power…. We are not counting seats any more. This fight is not for power or chief ministership. It will be shameful if we go after power,” he said.

Seven Valley-based parties have floated the People’s Alliance for Gupkar Declaration to fight for the restoration of Article 370.