Advertisement
Home / India / Farmers will not keep quiet until they destroy the laws: Sharad Pawar

Farmers will not keep quiet until they destroy the laws: Sharad Pawar 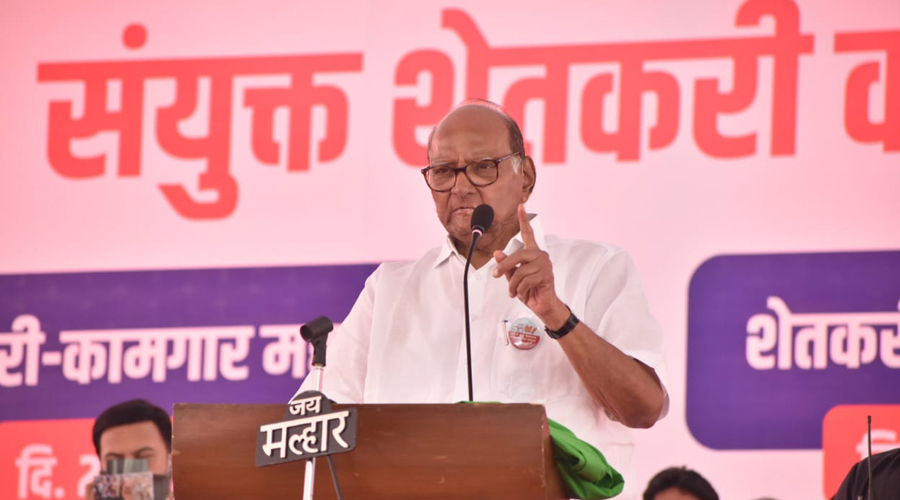 The Centre may pass any law undermining the Constitution and on the back of its majority, but once the common man and farmers rise, they will not keep quiet until the new farm acts and the ruling party are destroyed, NCP chief Sharad Pawar said on Monday.

Addressing a rally organised here to express solidarity with the farmers agitating near Delhi, Pawar also hit out at Maharashtra Governor Bhagat Singh Koshyari for heading to Goa at a time when peasants from the state were to submit a memorandum to the latter against the new farm laws.

He alleged Koshyari, who is also the Goa governor, had time to meet Bollywood actress Kangana Ranaut after the BMC last year demolished parts of her office here, but has no time for farmers.

The former Union agriculture minister accused Prime Minister Narendra Modi of not enquiring about the condition of farmers agitating near Delhi borders against the farm laws for two months now in cold weather.

“You may pass any law undermining the Constitution, not keeping in with the reputation of Parliament and destroying the Parliamentary system on the back of your majority.

But remember one thing, once the common man and farmers of the country rise, whether you withdraw the laws or not, they will not keep quiet until they destroy you and the law,” Pawar said during the rally.

Pawar alleged that the farm laws were passed without detailed discussion in Parliament despite the opposition parties demanding deliberations on the bills concerned.

The bills could have been discussed by a select committee, but it did not happen, he said.

...people (leaders from opposition) opposed it. But the laws were declared passed without discussion. This is the insult of the Constitution, he alleged.

He said the farmers' fight is not easy as those who are in power are not affectionate towards the protesters.

Pawar hailed the farmers from Punjab for their contribution in the country's freedom struggle and protecting it during the wars against China and Pakistan post-independence.

"It has been 60 days since the farmers from Punjab, Haryana, Western Uttar Pradesh, Rajasthan are protesting near Delhi.

"Did the country's PM enquire about (the farmers)? It was mentioned that the farmers are from Punjab. Does Punjab mean Pakistan?" Pawar asked.

The NCP president said the leaders of the farmers who attended the rally in Mumbai were to submit a memorandum to Koshyari.

We have not seen such a Governor in the history of Maharashtra. Lakhs of people have come here (at Azad Maidan). They were to submit a memorandum to the Governor.

"But the Governor has gone to Goa. He has time to meet Kangana, but not my farmer, Pawar alleged.

The NCP chief said it was the moral responsibility of the Governor to meet the farmers, but the latter did not fulfil his duty.

But he does not have that courtesy. He should have at least sat in the Raj Bhavan, Pawar charged on Twitter later.

However, the Raj Bhavan later clarified that the representatives of the Samyukta Shetkari Morcha, which organised the rally, were informed in advance that the Governor would not be able to meet the delegation on Monday as he would be in Goa to address its Goa.

It was already cleared (to Morcha representatives) that Governor Bhagat Singh Koshyari has additional charge of Goa Governors post and he would address the session of the Goa Assembly on January 25 and hence, will not be able to meet the farmers' delegation, the Raj Bhavan said in a statement.

Speaking at the rally, Thorat termed the farmers stir near Delhi as unprecedented.

The farm laws are for capitalists, hoarders and profiteers. the laws were passed without discussion, the Maharashtra minister alleged.

Thorat claimed there will be no MSP and market committees (APMCs) once the farm laws are implemented.

The Congress leader said the Maharashtra government wants to pass laws which will be in the interest of farmers.

No Shiv Sena leader or minister was seen at the rally, but the farmers' bodies claimed the ruling party had extended its support to the agitation.

The Shiv Sena heads the MVA government in which the Congress and the NCP are partners.

The protesting farmers have expressed apprehension that the new laws would pave the way for eliminating the safety cushion of Minimum Support Price and do away with the mandis, leaving them at the mercy of big corporates.