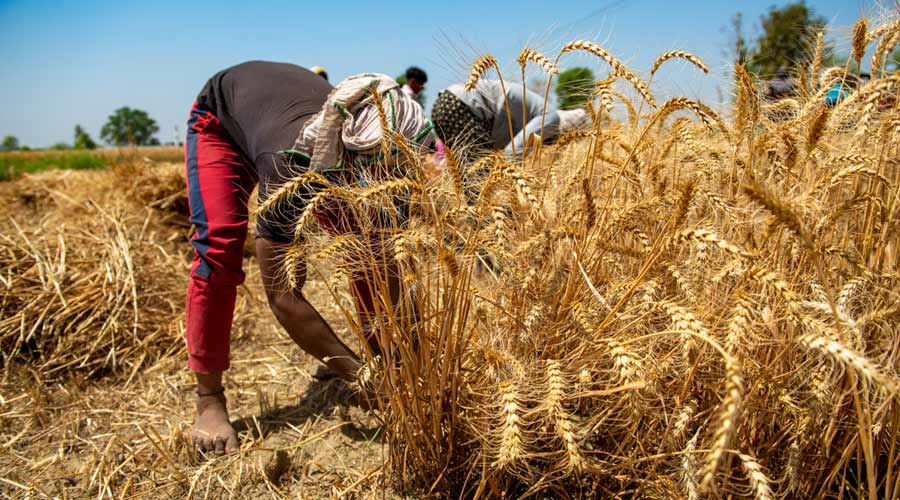 Farmers' unions in Punjab dubbed the Centre's decision to ban wheat exports as an "anti-farmer" move on Monday, saying that the Union government is not letting them reap the gains due to higher prices of their crops in the overseas markets.

They also slammed the Centre for not announcing a bonus of Rs 500 per quintal of wheat, as demanded by them to compensate the drop in the yield on account of shrivelled grains due to intense heat wave in March.

The Union government has banned wheat exports in a bid to check high prices amid concerns over lower wheat output this year.

According to the government, the decision will help control retail prices of wheat and wheat flour, which have risen by an average 14-20 per cent in the last one year, besides meeting the foodgrain requirement of neighbouring and vulnerable countries.

A number of farmers, especially big wheat growers, in Punjab have stored the crop in anticipation of fetching higher returns later, said farmers.

"It is an anti-farmer decision," Bharti Kisan Union (Ekta Ugrahan) general secretary Sukhdev Singh Kokrikalan said on Monday. He said the export ban will hit those farmers who had stored the crop in anticipation of fetching higher returns when the prices would increase in the domestic market.

Bharti Kisan Union (Lakhowal) general secretary Harinder Singh Lakhowal too condemned the central government's decision. "This decision is not in the interest of farmers," said Lakhowal, adding that the government should have continued with the export to take advantage of higher prices in the international market.

Shiromani Akali Dal chief Sukhbir Singh Badal on Sunday had slammed the Centre's decision of banning wheat exports, saying that this move will cause a drop in demand for the crop and farmers will be the worst sufferers.

The Punjab government on Sunday ordered continuation of wheat procurement operations at the Minimum Support Price (MSP) at 232 mandis in the state till May 31.

The state's food and civil supplies minister Lal Chand Kataruchak on Sunday said that the restriction on wheat exports was likely to result in a dip in prices of the food grain in the domestic market.

"As a result, some farmers who had stored the wheat produce in anticipation of fetching higher prices later, might have a rethink now and opt to sell the wheat. Therefore, it was important that the facility of government purchase at MSP continues to be available to them in order to avoid distress sale," Kataruchak had said.

Wheat production in Punjab is expected to drop by around 30 lakh metric tonnes (MT) to 147 MT as against the projection of 177 lakh MT on account of adverse impact on crop yield due to sudden high temperature in the month of March.

Wheat procurement from Punjab is also expected to miss the target of 132 lakh MT due to lower yield. Out of a total arrival of 102.27 lakh MT in grain markets so far, the government procurement agencies have bought 96.17 lakh MT while private traders purchased 6.10 lakh MT, according to official data.

Punjab Roller Flour Millers Association president Naresh Ghai, however, hailed the Centre's move, saying that the ban on exports would help in stabilising wheat prices. He said wheat prices in Madhya Pradesh and other state mandis have risen to Rs 2,200 per quintal.

The Centre has earlier relaxed procurement norms to allow up to 18 per cent shrivelled wheat grains in Punjab and Haryana.