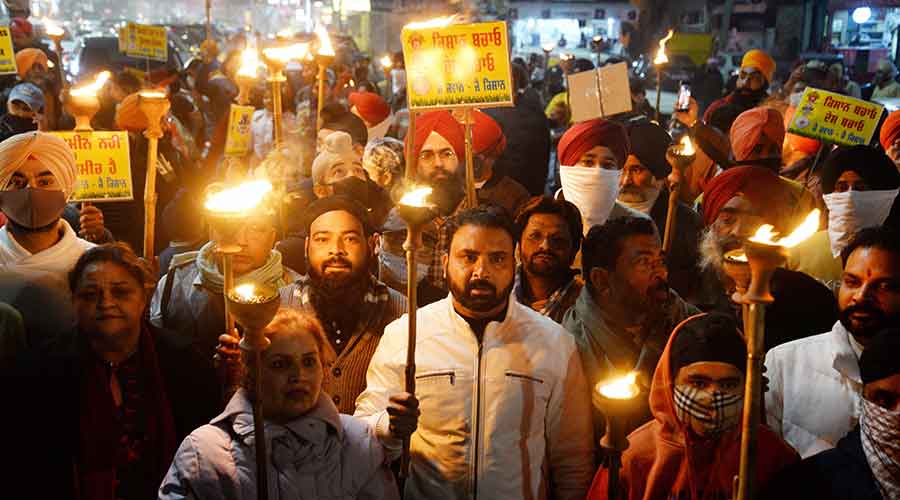 The Bharatiya Kisan Union (Tikait), one of the outfits taking part in the farmers’ agitation, has suggested that the government begin the vaccination campaign by inoculating those protesting at Delhi’s borders.

“We have come to know that the Supreme Court is concerned about the spread of the virus among the protesters and asked the government whether we are taking care. If this is the concern, then I suggest the Centre start the vaccination drive with us so that the virus doesn’t spread,” Rakesh Tikait, national spokesperson of the BKU (Tikait), told reporters in Ghaziabad on Saturday.

The Supreme Court had on Thursday asked the Centre to clarify whether adequate safeguards and Covid-19 protocols were being followed by the farmers protesting at Delhi’s borders and feared that “problems” similar to those that arose during the Tablighi Jamaat event last year could recur.

“You must tell us what is happening. I don’t know if farmers are protected from Covid,” Chief Justice S.A. Bobde had told solicitor-general Tushar Mehta during the hearing into an appeal for a CBI probe into the allegedly illegal Tablighi Jamaat gathering in Delhi during the Covid-induced lockdown in April-May 2020.

“Same problem may arise at the farmers’ protest too,” CJI Bobde had said.

Tikait said on Saturday: “Let us make it clear that we are not going to leave the dharna sites before the government withdraws the laws. Nothing can scare us, not even the fear of the coronavirus. The government must accept that the farmers are protesting in the December-January cold because they know that their farms and their produce are not safe under the new laws. The government has failed to prove that our fears are unfounded.”

“It the court thinks that there is a danger to us because of corona, then the Centre must listen to it and act swiftly. We are here with a firm commitment to make the government accept our demands. Since it is the government that is not acting on the demands of the farmers and making us continue the protest, the government would be responsible for the spread of the virus. So, the government can start by vaccinating us immediately,” Tikait added.

Farmers took out a protest march on their tractors in Ambala on Saturday, reports PTI.

He said the protests would continue till the Centre repeals the three farm laws enacted in September last year.