Farmers gearing up for Sunday's mahapanchayat in Muzaffarnagar

The peasants coming here from all over the country will not face any problem as the people are ready to offer them food, water, shelter and other assistance: Tikait 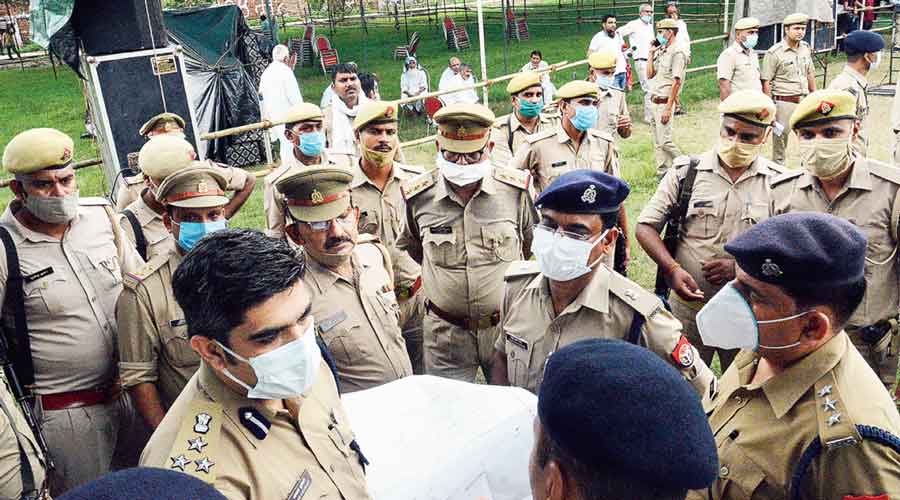 Policemen at the site in Muzaffarnagar, Uttar Pradesh, on Saturday where the kisan mahapanchayat will be held on Sunday.
PTI photo
Piyush Srivastava   |   Lucknow   |   Published 05.09.21, 02:35 AM

Bharatiya Kisan Union president Naresh Tikait has said the people of Muzaffarnagar have decided to keep their doors open for farmers who are to arrive from across the country to attend a mahapanchayat against the three farm laws on Sunday.

“The farmers coming here from all over the country will not face any problem as the people are ready to offer them food, water, shelter and other assistance,” the BKU chief said on Saturday.

The mahapanachayat has been called by the Samyukta Kisan Morcha.

“We are on a dharna at the Haryana-Delhi and Uttar Pradesh-Delhi borders for the last nine months. But this insensitive central government is hell bent on finishing farmers and handing over the agricultural fields to the corporates. The mahapanchayat would pledge to defeat the BJP in future elections so that the farmers are saved from its conspiracy,” Tikait said.

Additional district magistrate Amit Singh said: “Besides security forces all over, there will be women police on duty to look after the women farmers.”

State government sources said over 100 IPS officers and 20,000 police and paramilitary forces had been deployed in Muzaffarnagar and adjoining Meerut, Saharanpur and Shamli districts.

According to an order from the police headquarters, Lucknow, besides security forces of the respective districts, IPS officers from Allahabad, Kanpur, Lucknow, Moradabad and other districts would be on duty in Muzaffarnagar, Saharanpur, Shamli and Meerut.

“The administrative and police officers have held several rounds of meetings with our leaders and decided to deploy huge forces. We hope it is for the safety of the farmers,” Malik said.