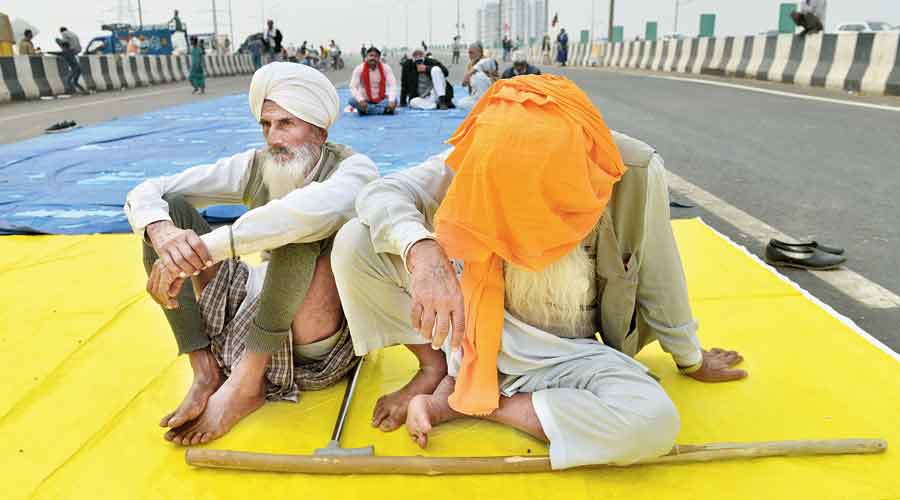 Protesting farmers at the Ghazipur border, with their walking sticks by their side
Prem Singh
Subhashish Mohanty   |   Bhubaneswar   |   Published 12.12.20, 02:00 AM

Sarangi, the Union minister of state for animal husbandry, dairying and fisheries, had said earlier on Friday: “No one, neither the farmers nor their leaders, is above the law. The farmers have been instigated to organise the agitation. There is no ground for agitation. Anti-national forces are behind the agitation. These reforms are for the good of farmers.”

Soon after Sarangi made the statement at the BJP party office, state convener of the All India Kishan Sangharsh Coordination Committee, Suresh Panigrahi, termed Sarangi, who hails from Odisha, as anti-farmer.

“Farmers are agitating for their rights. Lakhs of farmers, including those from Odisha, are camping in Delhi to get their rights. At this point one has no right to make such a statement. The Modi government is run by corporates and the farm bills have been brought at the behest of corporates,” said Panigrahi.

“We will not budge an inch from our demand. The Centre has to repeal the laws. We will intensify our agitation across the state on this issue,” he added.

Earlier, Sarangi also said: “The farmers have got independence because of the farm bills. The dalal (middleman) forced them to sell their produce at a lower price. They are creating all sorts of troubles for the farmers in the mandis. The farmer leaders who are spearheading the agitation had never launched an agitation to free farmers from the clutches of dalals. They are forcing the farmers to continue the agitation so that they never get independence.”

He further said; “A farmer can sell his produce in any part of the country through an e-marketing system. Farmers should get the right to sell their produce at a profitable price. This is a revolutionary law. The farmers have got all the independence. Those who are doing dalali (brokerage) they would only face losses. Others will be benefited.”

Targeting the agitation, Sarangi said: “All the farmers of the country are not in Delhi for the agitation. They are not representatives of all the farmers. Many farmers’ organisations have already welcomed the move (passing of new laws).”

“In democracy, there is a right to agitation. People have turned democracy into anarchy. There is a difference between anarchy and democracy,” he said, adding that the agitation is politically motivated.

The Union minister also maintained that the central government has clarified that there is no possibility of changing the ownership of land. “The law is clear on this issue. On contract farming, no one can force a farmer to accept it,” he said.

On the issue of farmers spending nights under the open sky in the chilly winter of Delhi, the minister said “even people in Shaheen Bagh had slept in the open at night... later it came to be known whose money was spent for it”.

Reacting to Sarangi’s statement, 30-year old farmer from Jajpur, Partap Nayak, said: “The minister is making the statement to remain in the good books of the Modi government. He has to make such statements and he has no concern for the farmers. The minister is wrong to say that all farmers are not in Delhi. Even our farmer leaders, including Naba Nirman Krushak Sangathan (a farmers’ body) president Akshay Kumar, are camping in Delhi demanding the scrapping of the farm laws.”