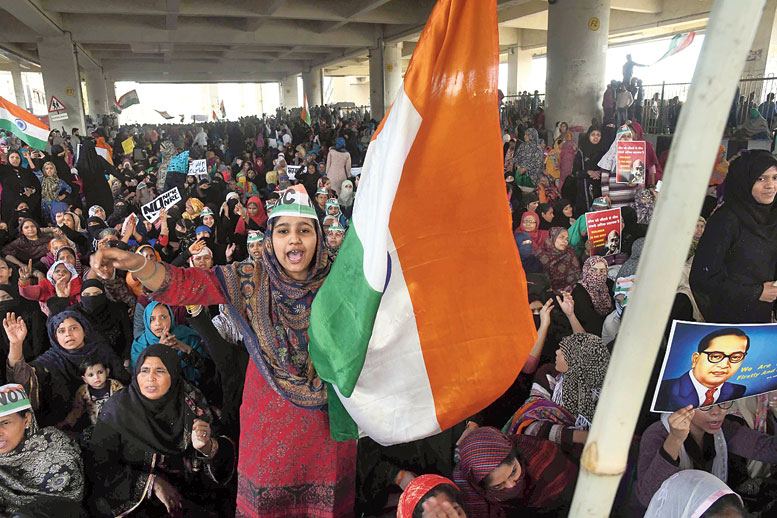 A WhatsApp message listing steps women can take to protect themselves during riots has been cited by Delhi police as key evidence while chargesheeting two student activists under grave sections in connection with the February riots against the backdrop of protests against the Centre’s new citizenship regime.

The police have charged Natasha Narwal and Devangana Kalita, along with several others, in their chargesheet for murder, rioting with deadly weapons, unlawful assembly, assaulting public servants and 11 other crimes under the Indian Penal Code, in addition to sections of the Arms Act and the Prevention of Damage to Public Property Act.

The WhatsApp message — the police did not say on whose phone it had been found — lists steps that are common knowledge in riot-affected areas.

The general public — irrespective of religions — have taken point four seriously, with a large number of steel gates being erected in the lanes of North East Delhi after the riots that killed 53 people.

A police crime branch statement to the media on the chargesheet said: “Twelve persons were arrested in the case. Investigation has revealed that there was a deep-rooted conspiracy to cause riots in North East Delhi. The list of arrested accused persons includes the names of Ms. Natasha Narwal and Ms. Devangana Kalita.

“Both Natasha and Devangana belong to the ‘Pinjra Tod Group’ and were actively involved in hatching the conspiracy to cause riots near Jaffrabad Metro Station, Delhi. They were also part of a larger conspiracy and were found to be connected to the ‘India Against Hate’ group and (activist and former JNU student leader) Umar Khalid.

“The following message, found in the phone of an accused, on WhatsApp chat, reveals the conspiracy and the extent of preparation for causing riots in Delhi.”

Pinjra Tod’s lawyers are yet to receive a copy of the chargesheet. One of them told this newspaper that they would respond only when the case comes to trial.

Jawaharlal Nehru University students Devangana Kalita and Natasha Narwal were arrested on May 23. Both have been booked in three FIRs each related to protests against the new citizenship matrix.

In one of the FIRs, Narwal is charged for alleged acts of terrorism under the Unlawful Activities Prevention Act.

Three students of Jamia Millia Islamia, including one who is pregnant, have also been charged under the stringent UAPA.

Former Assam chief minister Tarun Gogoi has slammed the Centre for arresting Kalita — an Assamese — for protesting against the CAA. The related National Register of Citizens had triggered massive protests in Assam.

A magistrate had earlier granted bail to Kalita and Narwal in connection with the FIR against the women’s sit-in at Jaffrabad, saying: “The accused were merely protesting against the NRC and the CAA and the accused did not indulge in any violence.”

On Tuesday, metropolitan magistrate Abhinav Pandey granted bail to Kalita in another FIR against a protest at Daryaganj, saying the police had furnished no evidence of “violent activity” by her. However, she is yet to get bail for the case in which the chargesheet was filed on Tuesday.

The police have also filed a chargehseet for the rioting on February 24 against municipal councillor Tahir Hussain, who has been suspended from the Aam Aadmi Party.