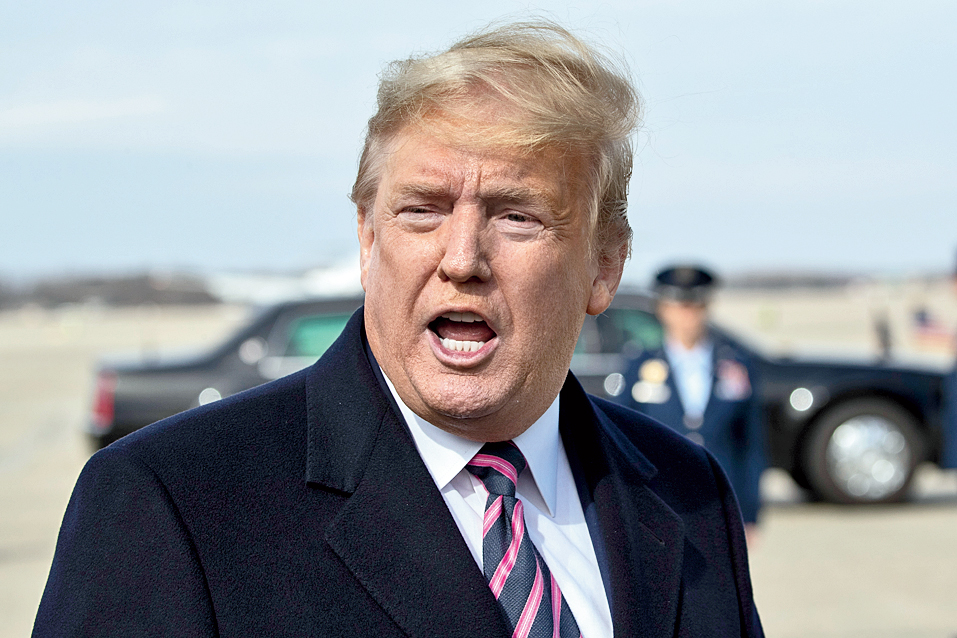 One of the great mysteries of the Trump presidency is the word “covfefe”, which the US President had tweeted soon after one midnight in 2017.

Close competition has come up in Gujarat in the shape and size of the “Donald Trump Nagrik Abhinandan Samiti”.

That such an organiser, which finds no mention on the numerous posters that have been put up all around Ahmedabad, existed was announced to the world by the Indian foreign ministry on Thursday. No details were provided about the organisation.

The organisation had no digital footprint till Thursday evening, except for the mention in online reports on the media conference by ministry spokesperson Raveesh Kumar where he first mentioned the Samiti.

The “Namaste Trump” show, though patterned along the lines of the “Howdy, Modi” event, is unlikely to have any Opposition presence unlike in Houston last September where both Republicans and Democrats were invitees.

Asked whether Opposition leaders had been invited to “Namaste Trump”, Kumar said, reading out from a chit: “This is an event being organised by the Donald Trump Nagrik Abhinandan Samiti. They are the ones who are taking a decision on who to be invited. I think this question should be addressed to them. The Samiti is taking all decisions on whom to invite.”

Given the unpredictability of the US President, who is given to tweeting with a degree of abandon and speaking off the cuff, India is keeping fingers crossed that the visit will pass without a hiccup on this count. On May 31, 2017, the President had baffled the Internet by tweeting at 12.06am: “Despite the constant negative press covfefe”. Around six hours later, Trump replaced it with a tweet: “Who can figure out the true meaning of ‘covfefe’ ??? Enjoy!”

On Thursday, attention has stayed focused on the Nagrik Abhinandan Samiti.

The Congress came up with some pointed questions, all directed at the Prime Minister’s Office, given Modi’s fondness for hosting mega events and the attention he pays to optics.

Congress media in-charge Randeep Surjewala tweeted: “Dear PM, intriguing news from @MEAIndia! Pls state — 1. Who is the President Donald Trump Abhinandan Samiti? 2. When was the invitation extended to US President & accepted? 3. Why is President Trump then saying you have promised him a grand event with 7 million people?

“Dear PM, why is Gujarat Govt then spending Rs 120 crore for a 3 hour event organised by an unknown pvt entity? India values its visiting dignitaries but pl note — Diplomacy is serious govt business & not a series of photo-ops & event management tactics.”

As to whether India can afford to splurge the amount that is being spent on the Ahmedabad leg of Trump’s 36-hour stay in India, Kumar said host countries do have to provide security and protocol for such visits and added that the same was done for the Indian Prime Minister when he visited the US and attended the “Howdy, Modi” event.

“We have to see any such visit in the context of protocol and security arrangements which have to be made. This is very reciprocal. When our Prime Minister visits abroad, we do expect such arrangements and facilitation to be done by other countries as well. So I don’t understand the big deal here.

“A certain amount of preparation from protocol, security and logistics has to be made when you have a head of State visiting the country. We got excellent support from the US side during the Howdy, Modi event. This is something that is reciprocal and part of the diplomatic norm which is extended to visiting leaders,” the foreign ministry spokesperson said.

“Howdy, Modi” was organised by the Indian diaspora in America with the help of sponsorships, not by a government arm — federal or state — of the US.

During Trump’s trip, the Ahmedabad municipal corporation is organising a roadshow and by all indications, it is the state government that is bearing the cost of the entire event and the arrangements.

The “Namaste Trump” event will be held at the newly renovated Motera cricket stadium.

Asked whether India was working with the Americans to ensure against any impromptu action by Trump during his stay — particularly on vexed issues like Kashmir and the Citizenship Amendment Act — Kumar said: “On all these issues our position is well known to the US side. Time and again we have communicated with them — the state department, the White House and the Congress — about our sensitivities. Our position is well known and we hope that things will go on smoothly during the visit. And, we don’t see any such problem.”

The United States Commission on International Religious Freedom has come out with a fact sheet on the CAA, citing not just media reports but also remarks made by central ministers, including Amit Shah, to show why the new law “represents a significant downward turn in religious freedom in India”.