Advertisement
Home / India / Development should not be seen through political prism, says Modi at AMU event

Development should not be seen through political prism, says Modi at AMU event 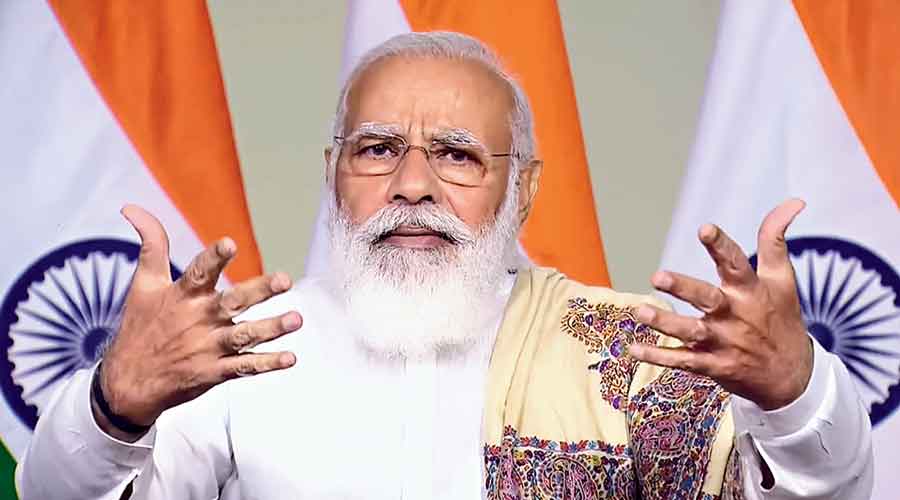 Prime Minister Narendra Modi on Tuesday said political and ideological differences should be set aside for the sake of national goals, asserting that politics can wait but development cannot.

Addressing the centenary celebrations of Aligarh Muslim University (AMU), he said development should not be seen through the political prism.

Without elaborating, he said some elements driven by self-interest and negativity are bound to feel uneasy when everyone comes together to achieve common goals.

"We have to understand that politics is an important aspect of society. But in society there are also issues other than politics, Modi said in the speech delivered through video conference to a university he called a mini-India.

He said there is space beyond siyasat' (politics) and 'satta' (power), which should be explored by campuses like AMU.

It is natural to have differences in society, he said. But when the issue is securing national goals, these differences should be set aside.

He listed economic development, education, the standard of living and nationalism (rastravaad) among the common goals. These are some of the issues on which we cannot differ in the name of our political or ideological (vaicharik) compulsions.

This was the first time in over five decades that a prime minister participated in an AMU event after Lal Bahadur Shastri attended one in 1964.

The PM's address also comes against the backdrop of sporadic protest by AMU students in past months over issues like the new Citizenship Amendment Act, and the targeting of the campus by some BJP leaders.

Modi stressed on development and said it should not be seen through the prism of politics.

When we come together for this goal, it is possible that some elements feel uneasy. Such elements are found in every society in the world. These are people who have self-interests and to fulfil them they can adopt any device and all types of negativity. But the space occupied by such people will shrink when the goal is to make a new India." the PM said

"Politics can wait, society can wait. But the country' development cannot wait," he said.

We should not waste time in 'matbhed' (differences) and move forward on a common ground to build a new India, that is 'Atmanirbar Bharat'," he said, stressing on self-reliance.

Modi lauded the AMU's 100-year-old heritage, recalling the contribution of its alumni.

"We have to unitedly work to ensure that the feeling of 'Ek Bharat, Shresth Bharat' (One India, Great India) gets strengthened day by day on the AMU campus," he said.

He said over 1,000 foreign students are studying at AMU and it is important to showcase the country's greatness to them.

The prime minister said as the country progresses, nobody should be left behind due to their religion.

His government's motto is "Sabka Saath, Sabka Vikas and Sabka Vishwas" and it is functioning without discrimination towards anyone, Modi said, listing several welfare schemes.

On the Swachh Bharat campaign, he claimed that with the construction of lakhs of toilets the rate of Muslim girls dropping out of schools has reduced sharply.

Over one crore Muslim girls have also been given scholarships, he said.

He said 35 per cent of the students in AMU are women and congratulated the university for this.

The prime minister said the government is working on increasing opportunities in higher education and gave statistics showing the rise in a number of institutes since a BJP-led government came to power in 2014.

The PM advised AMU scholars to conduct research on unknown freedom fighters and highlight their contribution.

Modi said AMU produced great personalities over the past 100 years and has shaped the lives of many.

He also praised the AMU efforts in fighting coronavirus by conducting free COVID-19 tests, setting up a plasma bank and contributing to the PM Care fund.

He called AMU "mini India". Urdu and Hindi, Arabic and Sanskrit are all taught on the campus, he said. Along with Quran, the translations of Gita and Ramayana are kept in the library.

"This diversity is the country's strength. We have to neither forget it nor let it get weakened," he said.

Before Modi, Lal Bahadur Shastri attended an AMU event as prime minister in 1964.

Before him, Jawaharlal Nehru visited the campus four times, beginning with 1948 when an honorary doctorate was conferred on him at the annual convocation. This was followed by visits in 1955, 1960 and 1963.