According to Deputy Commissioner of Police (Outer) Sameer Sharma, the company owners who were detained have been arrested in connection with the incident 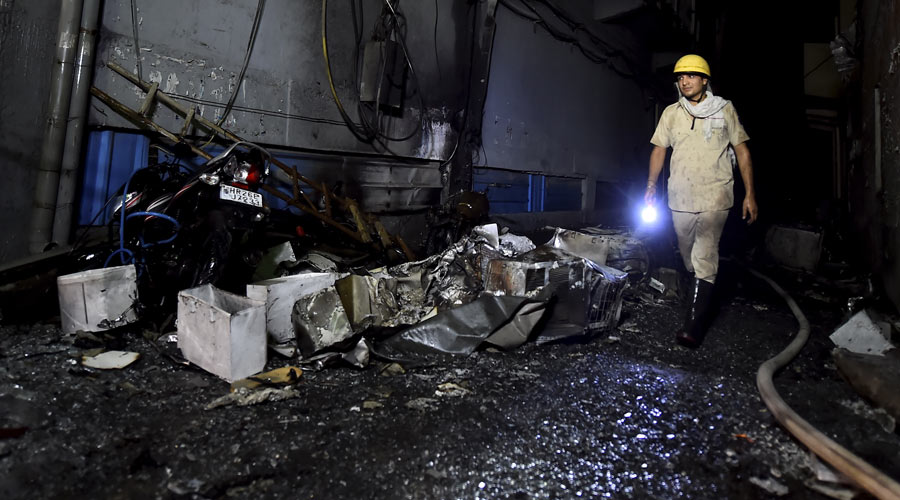 A Fire Brigade personnel at rescue and relief work after a massive fire at an office building near the Mundka Metro Station, in West Delhi, in the wee hours of Saturday.
PTI Photo
Our Bureau, PTI   |   New Delhi   |   Published 14.05.22, 10:29 AM

Charred human remains were found on Saturday on the second floor of the building in outer Delhi's Mundka area where a massive fire broke out a day back, Delhi Fire Service (DFS) officials said.

It is suspected that an explosion in an AC may have triggered the fire, DFS Director Atul Garg said.

Twenty-seven people have died so far in the blaze that ripped through the four-storey building on Friday. The fire started from the first floor that houses the office of a CCTV camera and router manufacturing and assembling company, the police have said.

The owners of the company, Harish Goel and his brother Varun Goel, who were detained earlier, have been arrested, Deputy Commissioner of Police (Outer) Sameer Sharma said.

"Charred human remains were found on the second floor of the building during a search operation by our fire fighters. But we cannot say if it is the remains of one body or several bodies. Though the fire has been doused, the cooling and search operations still continues," Garg said.

At present, two fire tenders are present at the spot, he added.

According to Deputy Commissioner of Police (Outer) Sameer Sharma, the company owners -- Harish Goel and Vijay Goel who were detained have been arrested in connection with the incident.

An FIR has been registered against them under sections 304 (punishment for culpable homicide not amounting to murder), 308 (attempt to commit culpable homicide), 120 (concealing design to commit offence punishable with impris onment) and 34 (Common intention) of the Indian Penal Code, he said.

All floors of the building were being used by the same company, the DCP said.

The building's owner, Manish Lakra, has also been booked, the police said.

They said search operations are underway.

Identities of all but one of the 12 injured have been ascertained, an official said.

The injured were rescued and taken to a hospital, where they were given treatment, officials said.

According to the police, a call about the fire was received at 4.45 pm on Friday following which they immediately reached the building location, near metro pillar number 545.

Police officials broke the windows of the building to rescue people, they said, adding the injured are admitted to Sanjay Gandhi Hospital.

During initial enquiry, the police found that the four-storey building was used for providing office spaces to companies.

Over 50 employees of the company whose office was located on the first floor were rescued while 27 bodies have been found, they said.

Some ambulances were also made available at the spot to provide immediate medical assistance to the rescued victims.