Hundreds of Dalits today began a march from Ahmedabad to Una to protest the flogging of four youths by cow vigilantes, but the standout feature was their being joined by Muslim and non-Dalit activists possibly signalling a new alignment of forces. 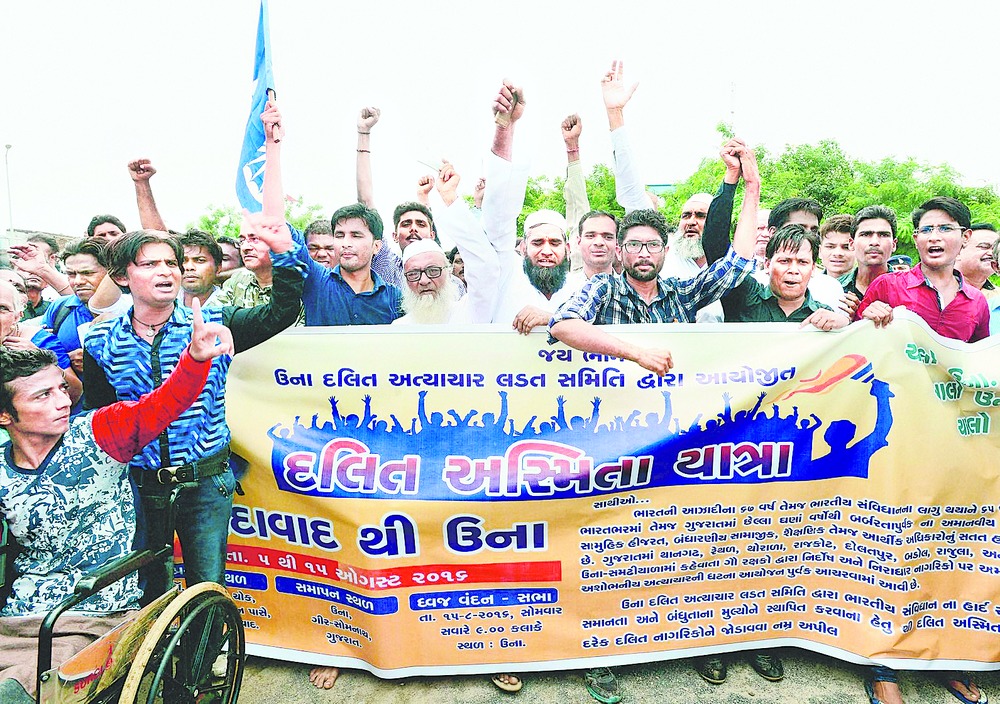 Ahmedabad, Aug. 5: Hundreds of Dalits today began a march from Ahmedabad to Una to protest the flogging of four youths by cow vigilantes, but the standout feature was their being joined by Muslim and non-Dalit activists possibly signalling a new alignment of forces.

The 355km march for Dalit pride, which began at Ambedkar Chowk and is slated to end on Independence Day, is a continuation of Sunday's mega rally organised by the newly formed Una Dalit Atyachar Ladat Samiti to protest the July 11 incident.

The march is the brainchild of retired IPS officer Rahul Sharma, one of many officials sidelined for taking on the Gujarat government when Narendra Modi was chief minister. He is part of the 101 core members that will march the full distance with others joining in and dropping off along the way.

"The Una incident was inhuman, barbaric. It needs to be condemned. We should ensure that such incidents do not recur. The padyatra will have the desired impact," Sharma said.

"We had not expected more than 50 people to join us. But we see many more here."

Muslim activist Kaleem Siddiqui, who joined the march along with over 25 members of his NGO, Insaf, said: "I am a great advocate of Dalit-Muslim unity, which is the need of the hour."

He said the shock his community suffered after the 2002 riots - Dalits were then allegedly instigated to attack Muslims - had abated and efforts were on to figure out which social group to align with. The choice now appeared clear, he said.

Since the same ideological forces were targeting Muslims and Dalits in many parts of the country, "we have come to realise that Dalit-Muslim unity is the only guarantee of our safety and dignity", Siddiqui said.

In this context, the march sent the message that "if Dalits and Muslims stood together, no force could discriminate against the two communities", said Pratik Sinha, a rights activist.

Another activist, Harinesh Pandya, said the march signalled a new phase of grassroots activism. Whether the tempo would last would be known only on August 15, he said.

K.R. Koshti, a member of the Swaraj Abhiyan that has joined the march, said a huge change had taken place between 2002 and 2016. "Now Dalits are saying they don't want to continue with their job of skinning cattle.

"They are no longer ready to be forced to do a job they don't want to. This is a new Dalit revolution that is taking place post-Una."