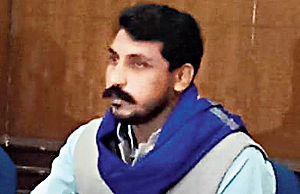 Bhim Army founder Chandrashekhar “Raavan” Azad has announced he will gift a copy of the Constitution to the district magistrate of Ayodhya on Monday to remind him of his obligation to obey the Supreme Court.

“On behalf of the Bhim Army, I will go to Ayodhya tomorrow with a copy of Babasaheb’s (B.R. Ambedkar) Constitution, and I will say that the country is run by the Constitution and if the people running this country, and the Uttar Pradesh government, cannot protect the people with this Constitution, they should vacate their seats,” Azad said here on Sunday.

“They say they are unable to stop people…. So I requested honourable (PM) Modiji and (CM) Yogi (Adityanath) that they both quit. The bahujan samaj (literally, the majority, a reference to the Shudra castes that traditionally perform manual labour) will accept (the resignations).”

The Dalit leader added: “I will go with a copy of the Constitution and an image of Babasaheb and show it to the DM (Anil Kumar) and say, ‘You have got this job to protect people’…. Such drama (Sunday’s Dharma Sabha in Ayodhya) is being planned, this must not happen in a democracy.

“December 6 is the Mahaparinirvan Divas (death anniversary) of Babasaheb and November 26 is Constitution Day. It (the Babri Masjid demolition of December 6, 1992) was done deliberately to make people forget Babasaheb.”

Azad had said last year “Raavan is my name” as he admired him for not dishonouring Sita.

On Sunday, Azad said: “What is happening in Ayodhya right now is nothing but another attempt by the BJP and the Sangh parivar to whip up communal frenzy, instigate violence and use the bloodshed to polarise voters to the party’s benefit during the 2019 elections…. If they create riots, Bahujan will be divided. That’s why I’m working to expose their political conspiracy before the people.”

The VHP and others have been raising the Ram temple pitch in Ayodhya at a time the title dispute is pending in the Supreme Court. A bench will decide in January when to hear the appeals.

Azad cited a civil suit Ayodhya’s Vineet Maurya had filed in the Supreme Court in March raising Buddhist claims on the disputed land. Azad demanded that Ayodhya revert to “Saketa”, its name in the 5th and 6th centuries BC when it was the capital of Kosala, ruled by Buddhist kings.

Azad was released from jail on sympathetic grounds after he spent more than a year behind bars, facing trial under the National Security Act for alleged involvement in Rajput-Dalit clashes in Saharanpur, Uttar Pradesh.

Last week, Azad had announced he would participate in the commemoration of the Battle of Koregaon, an Ambedkarite celebration of the victory of the predominantly Mahar-caste East India Company troops over the Maratha soldiers of Peshwa Baji Rao II in 1818.

Pune police had arrested several people on the charge of associating themselves with Maoists, who were allegedly involved in last year’s event, and participating in a purported plot to assassinate the Prime Minister.

On Saturday, BSP leader Mayawati made a veiled attack on the Bhim Army, saying: “Some small organisations are holding rallies and telling people they are related to the BSP in order to garner support…. Such organisations may play into the hands of Opposition parties during the elections…. It was due to these organisations that violence broke out last year in the peaceful village of Shabbirpur in Saharanpur district. Many Dalits were injured and killed in these violent incidents, following which I had resigned from the Rajya Sabha as I was not allowed to speak on the issue by leaders of Opposition parties.”

Azad responded that he “will always be with the BSP”, adding: “If the Congress calls itself a well-wisher of Dalits, then give leadership to honourable Behenji (Mayawati) and fight elections all over the country under her leadership.”

The trial of Ayodhya