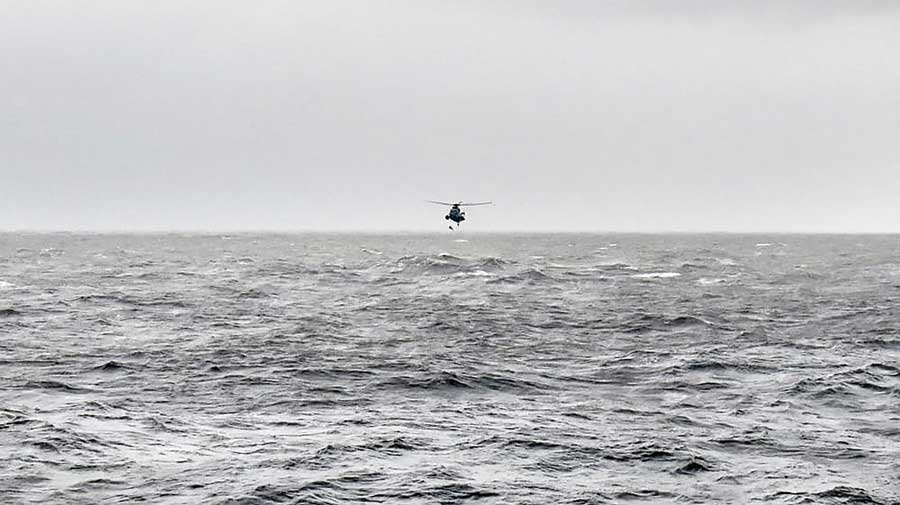 Inadequate advance notice and miscalculations of Cyclone Tauktae’s ferocity and its path may have contributed to a false belief that oilfield operations in the Arabian Sea need not be paused, said top sources close to the ONGC whose vessels with 700 on board were struck by the storm.

The death toll from the barge P305 that sank in the Arabian Sea rose to 49 with the recovery of more bodies even as the navy and the Coast Guard searched for 37 other missing people since the severe cyclonic storm battered the region.

The chief engineer of P305 that sank off the Mumbai coast during Tauktae alleged on Thursday that its captain did not take the cyclone warning seriously. Rahman Shaikh also questioned the vessel’s seaworthiness.

A drillship of the Oil and Natural Gas Corporation (ONGC) and three barges of private contractor Afcons working on the state-owned firm’s oilfield went adrift after their anchors gave away in the storm on Monday night.

A massive day-night operation by the Indian Navy, the Coast Guard and ONGC vessels helped save those on the drillship and two barges, but only 186 out of 261 on board accommodation barge P305 that sank four days ago could be rescued.

The chances of finding more survivors are looking bleak, another official said.

“Installations used to find and produce oil and gas from under the seabed are built to work in difficult weather conditions. In the Mumbai offshore, these installations stand in water depths of between 75 meters and 200 meters,” said a source with direct knowledge of the matter.

The world over, offshore oil and gas operations are neither shut nor personnel evacuated in every adverse weather event.

“It is done only if it is assessed that an event would be hard to handle,” he said. “Such assessment primarily depends on the weather input received by the operator.”

In the case of Tauktae, the most severe storm to hit the west coast in more than two decades, the predictions on speed, atmospheric pressure and route went wrong, the source said.

“More importantly, it takes about a week or so to shut operations, move vessels and shift people out as per the laid-down protocol for a mishap-free operation,” he said.

“In the case of Tauktae, there wasn’t enough time to do so. Also, the forecast of path and ferocity were not accurate. The time that vessels had was enough only to shift to survival mode and not go for evacuation.”

Another source said the captains of the ships were the final decision-making authority on board.

All information received from the weather department and the Coast Guard were passed on to the operator as well as the captains of the four vessels, he said.

“We don’t know yet why the captains chose to do what they did during the cyclone,” the source said, adding an inquiry committee had been set up to look into the matter in detail.

Recovering from his injuries, chief engineer Rahman said in a video shot by his brother Aalam that Balwinder Singh, the captain of P305, insisted that wind speeds would not be very high and the cyclonic storm would last only for an hour.

“The captain said the wind would not go over 40 knots (about 75kmph). It will start at 11 and end at 12. The entire incident happened because of the captain and the client,” Rahman, 48, said.  PTI

Balwinder is among the people still missing. He is said to have jumped into the waters without a life jacket.

The oil ministry on Wednesday constituted a high-level committee to enquire into the sequence of events leading to the stranding of the vessels.

It has been asked to “inquire into the sequence of events leading to the stranding and drifting of these vessels, and the subsequent events”.

The terms of reference of the panel also include looking into “whether the warnings issued by the meteorological department and other statutory authorities were adequately considered and acted upon”.