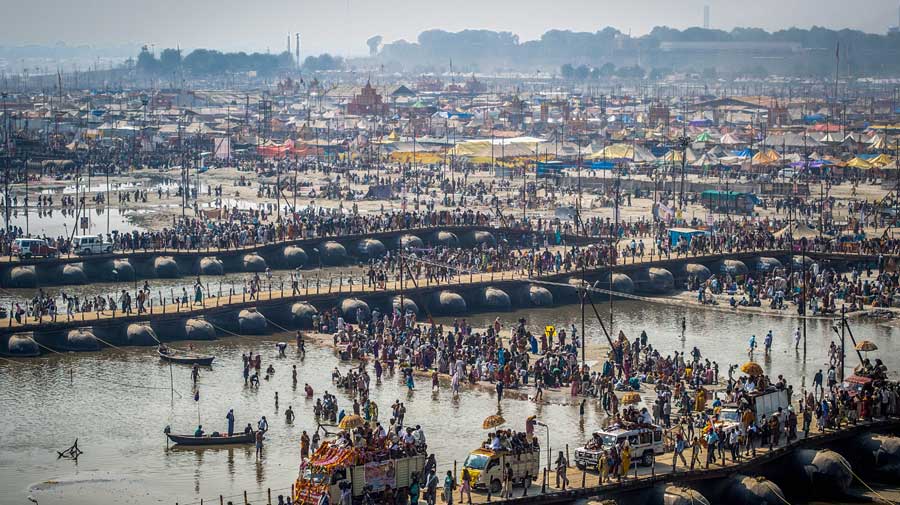 “This positivity rate has the potential to rapidly turn into an upsurge in cases given the expected footfall during the Kumbh,” the health ministry said, citing the teams’ concerns conveyed by the Union health secretary Rajesh Bhushan to the chief secretary of Uttarakhand.
Shutterstock
G S Mudur   |   New Delhi   |   Published 22.03.21, 02:09 AM

The daily observed counts of new Covid-19 cases among pilgrims and residents at the ongoing Kumbh Mela in Haridwar could rapidly rise into a surge, India’s health ministry warned on Sunday, also expressing concern that the site had inadequate testing facilities.

The ministry said a central public health team that had visited the Kumbh Mela had noted that 10 to 20 pilgrims and 10 to 20 residents were testing positive every day in Haridwar, where about a million people are expected to congregate for dips in the Ganga daily up to April 30.

“This positivity rate has the potential to rapidly turn into an upsurge in cases given the expected footfall during the Kumbh,” the health ministry said, citing the teams’ concerns, which Union health secretary Rajesh Bhushan has conveyed to the Uttarakhand chief secretary.

The health ministry had earlier this year asked the state to augment its facilities and adopt steps to curb the spread of Covid-19 through the Kumbh, where about five million people are expected on four auspicious days — April 12, 14, 21 and 27.

The ministry has told Uttarakhand the daily testing numbers in Haridwar — 5,000 PCR tests and 50,000 of the less reliable antigen tests — are not enough to “effectively offset” the huge expected pilgrim footfall and asked it to increase its testing capacities.

Health officials are concerned that any surge in Covid-19 cases through the congregations at the Kumbh could overwhelm healthcare facilities in the Haridwar-Rishikesh-Dehradun area, which has around 2,800 hospital beds.

The health ministry had in January guidelines for the Kumbh Mela asked the Uttarakhand government to ensure that only pilgrims who carry negative PCR test reports, obtained within 72 hours before their arrival in Haridwar, are allowed into the Kumbh.

But public health experts say the daily case counts detected by the central health team during their visit earlier this month suggest that Covid-positive pilgrims had arrived in Haridwar despite those guidelines.

Officials and experts are worried that the Kumbh congregations have the potential to turn into super-spreader events, where a few infected people rapidly spread the virus to large numbers of others.

“It would be extremely challenging to do contact-tracing after such a mass gathering,” said Oommen John, a physician and senior research fellow at The George Institute for Global Health, New Delhi.

The Haridwar Kumbh Mela, which started on February 27, comes at a time India's Covid-19 epidemic is headed towards a second peak.

Health authorities on Sunday recorded 43,846 new Covid-19 cases nationwide, the highest daily count this year and nearly half the average of 93,000 cases witnessed during the peak of the first wave in September last year.