The national capital recorded 6,456 fresh Covid-19 cases on Sunday, the lowest since April 7 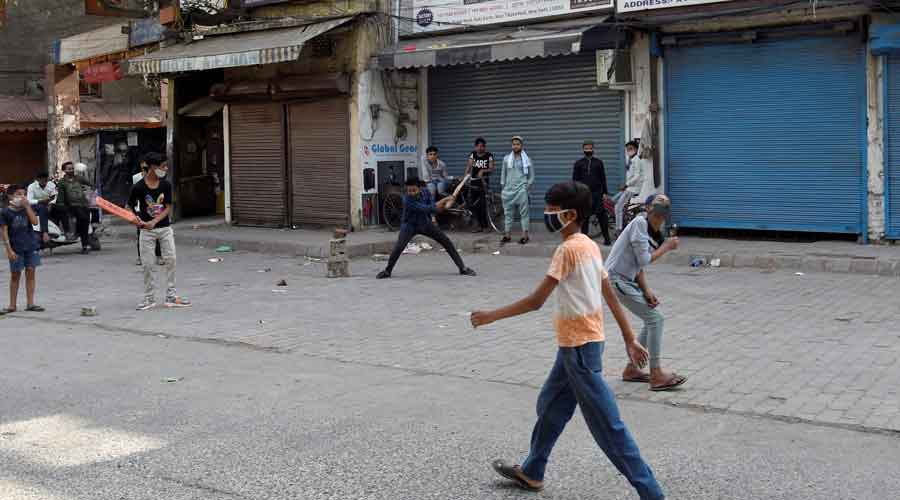 Children playing cricket during at Nabi Kareem wears a deserted look during the Covid-induced lockdown, in New Delhi
PTI
Our Special Correspondent   |   Hosur   |   Published 17.05.21, 12:44 AM

The Delhi government has extended the lockdown in the capital by a week, buoyed by the falling coronavirus positivity rate.

The national capital recorded 6,456 fresh Covid-19 cases on Sunday, the lowest since April 7. The positivity rate has dropped to 10.40 per cent, the lowest in over a month, according to a Delhi government health bulletin.

Chief minister Arvind Kejriwal told the capital’s residents in a webcast on Sunday not to expect more vaccines as his pleas to the Centre had not been answered.

“Coronavirus cases are also rapidly declining, but the gains we have made in the past few days, we don’t want to lose them. So we are going to extend the lockdown for another week,” the AAP leader said.

Kejriwal added: “As far as I can understand, Delhi is slowly coming back on track. The lockdown is to continue as it is, no concessions will be given. Regarding Covaxin and Covishield, we have written both to the central government and the two companies to provide us with the vaccines, but there is no indication of the vaccines being given to us.”

New Delhi has been under a lockdown since April 20 with several exemptions, which included weddings with up to 50 attendees. This exemption has been further restricted to weddings only inside homes or at courts with no more than 20 people present.

Last week, Metro services, which had earlier been restricted to the bare minimum, was stopped.

With Delhi following the national trend of more recoveries than new cases, the oxygen crisis in the capital has abated.

However, the city is yet to start food relief for migrant workers without ration cards, which had led to their flight last month.

Vaccine stocks are running short in the capital, and Covaxin-manufacturer Bharat Biotech has refused additional supplies. None below 45 is receiving Covaxin now in Delhi.