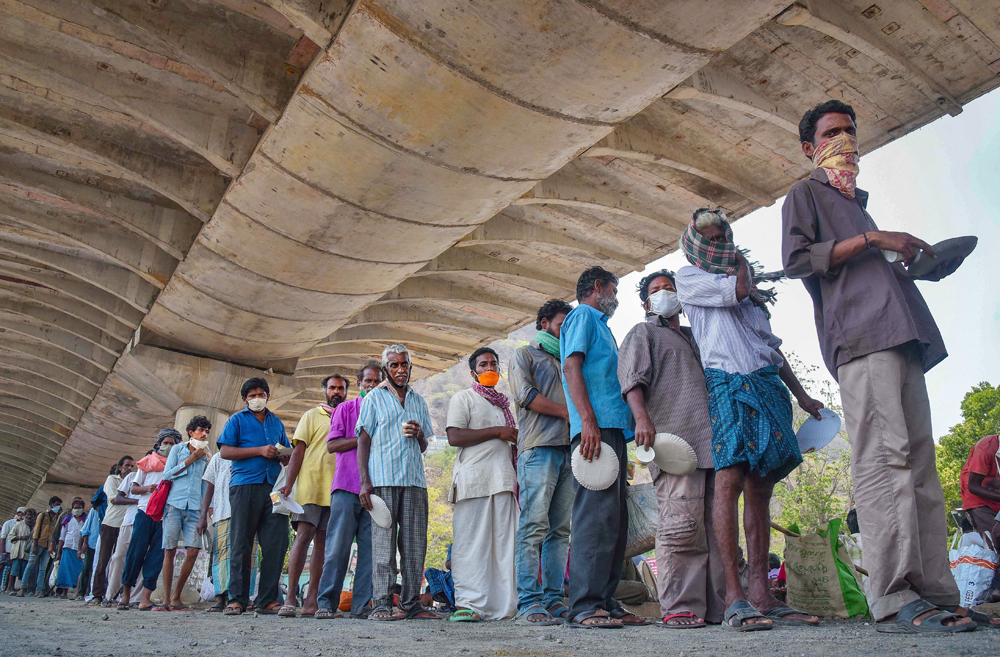 Stranded migrant labourers stand in a queue to receive food from volunteers as they take shelter under a flyover after leaving a quarantine facility, during the fourth phase of Covid-19 lockdown, in Vijayawada, Sunday, May 24, 2020.
(PTI)
K.M. Rakesh   |   Bangalore   |   Published 28.05.20, 10:20 PM

The Kerala government has decided to charge only those expatriates who can afford for quarantine facilities, after facing criticism from the Opposition for announcing that it would follow central guidelines and make all stranded returnees pay for the isolation service.

The central guidelines dated May 24 had said all expatriates returning to India should undergo 14-day quarantine — “seven days paid institutional quarantine at their own cost” followed by seven days of home quarantine.

After the Opposition Congress came down heavily on the Left government for the “injustice” meted out to the returnees, chief minister Pinarayi Vijayan said on Wednesday: “The government’s position is that those who can afford to pay can be charged for the quarantine. The poor need not worry.”

The Congress-led United Democratic Front didn’t waste the opportunity to slam the government over its earlier decision to charge all returning expats.

“It is unfair to make our expatriates pay for quarantine since they are the reason why Kerala prospered over the years,” leader of the Opposition and Congress veteran Ramesh Chennithala told The Telegraph on Thursday after announcing a daylong protest to be held on Friday.

“The chief minister changed his stand after we raised the matter at the all-party meeting held yesterday (Wednesday). Otherwise, the government would have charged all the overseas returnees,” Chennithala said.

While the UDF has no objection to charging the wealthy returnees, Chennithala said it was time to help the poor blue-collar workers.

“The government knows that the expatriates are the ones who helped change the economic landscape of our state. The least they could have done is to help the blue-collar workers who have already suffered a great deal due to the international lockdown,” Chennithala said.

All MLAs and MPs of the UDF will hold sit-in protests outside district collectorates and the state secretariat on Friday.

Chennithala, however, was non-committal on the promise made by UDF ally Indian Union Muslim League that the Opposition front would charter aircraft and bring back stranded expats for free and also cover their quarantine facility bills.

“Each of our MLAs would do what is possible. But we will help anyone who reaches out to us,” he said.

K.V. Abdul Khader, a CPM legislator who is also the chairman of the Assembly’s Pravasi Welfare Committee, lampooned the Opposition for making “baseless” allegations against the government.

“The chief minister has already clarified that expatriates who lost their jobs or don’t have money need not pay for the quarantine. Yet the Congress is trying to create some issue out of nothing,” Khader told this newspaper.

“The Congress is displaying its double standard as it’s charging expatriates in Punjab and Rajasthan where the party is in power but holds an opposite view in Kerala,” he said.

Kerala Youth Congress leaders held a protest at the office of the Non-resident Keralites Affairs (Norka), the nodal department for the welfare of Malayalis living outside the state.

Youth Congress leaders, including legislator K.S. Sabarinathan, raised slogans and laid a wreath outside the office, marking the symbolic death of Norka. But in the process they violated Covid-19 protocols of social distancing and wearing masks.

“Our expatriates, who have for long been our financial backbone, last year sent Rs 70 crore in foreign exchange. We need to remember that a good number of those who remit foreign exchange is blue-collar workers,” Sabarinathan said.