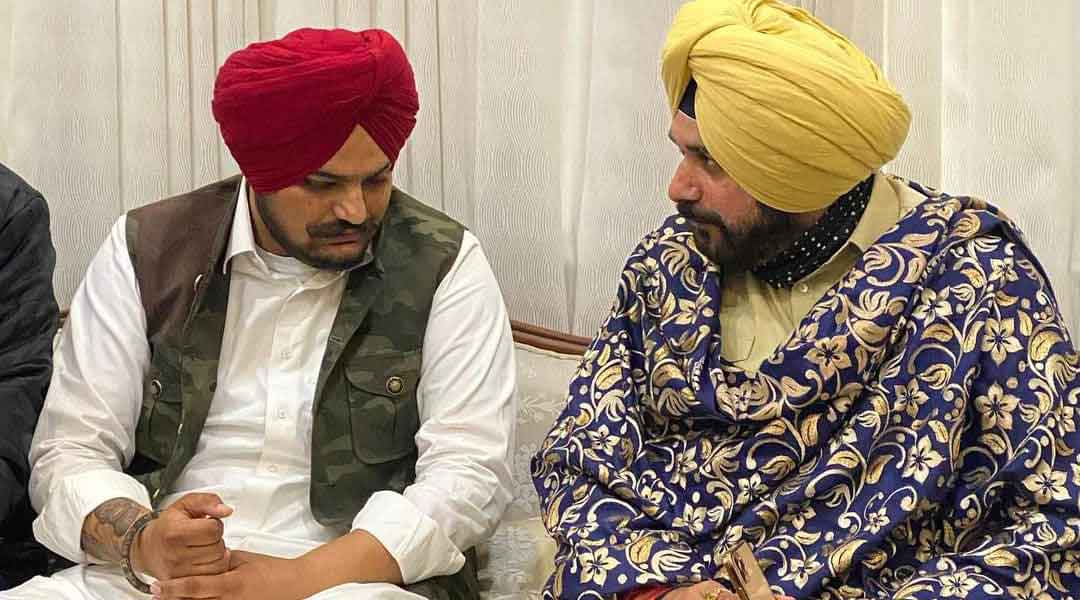 The singer joined the party in the presence of Chief Minister Charanjit Singh Channi and the party's state chief Navjot Singh Sidhu here and may contest the Punjab Assembly elections.

The 28-year-old singer, whose real name is Shubhdeep Singh Sidhu and who has a fan following among the youth, was booked last year for allegedly promoting violence and gun culture through his song Sanju.

He was earlier booked under various provisions of the Arms Act and the Disaster Management Act in Barnala after his photographs of firing an AK-47 rifle at a firing range during the Covid lockdown surfaced on social media.

He hails from Moosa village in Mansa district and his mother is a village head.

Moosewala's father, who was also present on the occasion, is an ex-serviceman.

Welcoming Moosewala into the party fold, the Punjab Congress chief described him as a "youth icon" and an "international figure".

"Sidhu Moosewala is joining our family. I welcome him in the Congress fold," he told reporters here.

Channi said Moosewala became a "big artist with his sheer hard work and won hearts of millions of people with his songs"'.

Warring was learnt to be instrumental in Moosewala's induction to the party.

Moosewala had been booked in multiple cases for promoting gun culture and also under the Arms Act, said Chugh in a statement, adding that the Congress support to "such criminal elements" in society was a warning bell for the state.

He alleged that in December 2020, Moosewala had sung songs glorifying Jarnail Singh Bhindranwale and other separatist leaders.

Replying to a reporter's question that Moosewala allegedly faced allegations of promoting gun culture in his songs, Navjot Singh Sidhu said, "Understand one thing, facing a case does not mean one is guilty... I also faced a case but won six elections. It is a sub-judice matter and it is not appropriate to comment on a matter related to court."

As Sidhu took the plea that it was not proper to comment on a sub-judice matter, the reporter sought to remind him of his consistent statements related to the STF report on drug menace case which was being heard in the high court.

At this, Sidhu asserted that there was no bar on making the special task force report on drug cases public.

The Punjab Congress president had last month threatened to go on an indefinite fast if his party's government does not make public the STF report on the drug menace.

"Those who say the matter is sub-judice...if anyone cannot understand, he should get some education," Sidhu retorted, asserting that there was no bar from the court in making the report public.

On case against Moosewala, Sidhu said, "Let people decide about it. It is not a media trial."

While welcoming Moosewal to the party fold, Sidhu said, "An iconic, cult figure is joining the Congress family today. It is not that he is new to our family. His mother is a Congress party sarpanch. We see him as a youth icon, who commands great respect."

"He will fight elections for us but that is a decision for another day. His meeting with the party high command will be arranged on Friday," said Sidhu.

Chief Minister Channi said, "Today is a revolutionary day in Punjab's politics. A man from a simple family, who became a big artist with his hard work and who won hearts not only in Punjab but around the world, has joined the Congress."

Moosewala said he started music three to four years back and earned people's love and respect.

"After four years, I am going to take a new step in my life. It is a beginning in a new world. It has never been my interest in this (politics) but from the beginning, I love my village. My father is an ex-Army man," he said.

"When we go to people, they have expectations. Mansa and Bathinda areas are associated with me for their love and blessing," the singer said.

He said he was not entering politics for any post or position.

"Some people are connected with me and they have expectations from me. To change and improve the system, it is necessary to be a part of that system," the singer said.

He said his decision to choose the Congress was due to the fact that the party has several leaders from an ordinary background.

He added that he joined the party as he wanted to raise the voice of the common people.

"I expect from people to bless me in supporting the common people too the way they blessed me in music," he said.