Advertisement
Home / India / Congress sniffs conspiracy in sniper attacks on Gandhi, silence in govt
Someone has to speak up 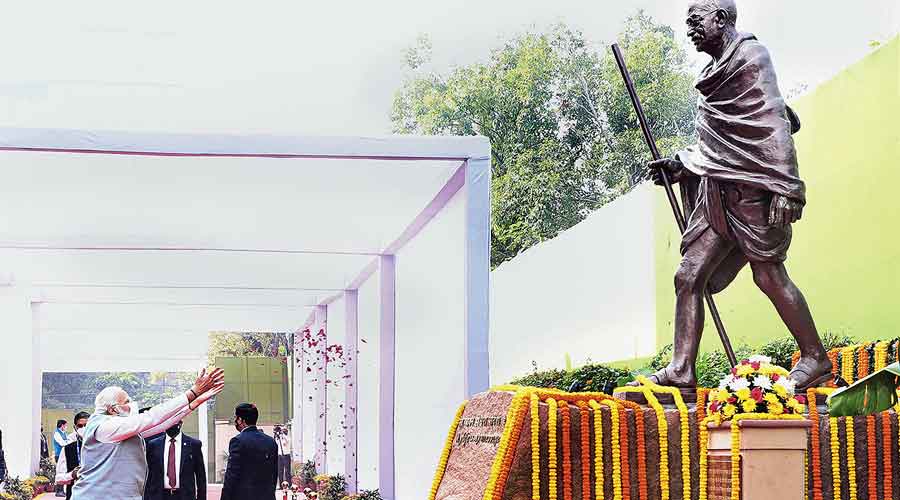 Prime Minister Narendra Modi paying tribute to Mahatma Gandhi before addressing an event at the Comptroller and Auditor General of India building in New Delhi on Tuesday. The Prime Minister is yet to utter a word in public on Kangana Ranaut’s week-old description of India’s Independence as “bheekh (alms)”. Neither has Modi commented on Ranaut’s subsequent remarks mocking Bapu’s mantra of ahimsa by saying that offering another cheek yields one more slap and “bheekh”.
PTI Photo
Sanjay K. Jha   |   New Delhi   |   Published 19.11.21, 02:02 AM

The Congress has smelt a sinister conspiracy to legitimise Nathuram Godse by undermining India’s freedom struggle and dislodging Mahatma Gandhi from his unrivalled pedestal.

Although the Congress had initially ignored actress Kangana Ranaut’s comments condemning Indian Independence as “bheekh (alms)”, the party has now taken note of the sustained attacks on Gandhi and the silence of the entire Hindutva ideological fraternity on the concerted campaign to malign the Father of the Nation.

The Congress is seeking to alert the country to the lurking perils as it begins to see Kangana as a Sangh parivar agent who is using her popularity to set the agenda.

Congress spokesperson Gourav Vallabh said on Thursday: “There could be two reasons for what the agyani sarkari adaakara (ignorant sarkari actress) is saying: one, she is reading the text supplied to her for diverting the nation’s attention from real concerns. Two, there is a very big conspiracy to dislodge Gandhi and establish Godse.”

The Congress leader underlined that Kangana had been heaping insult on Gandhi, and that Prime Minister Narendra Modi, the government and the BJP had remained mum. “The government has no problem if an actress insults Gandhi, Bhagat Singh and generations of martyrs who sacrificed their lives for the country,” Vallabh said.

That the Congress suspects Kangana has been planted by the RSS-BJP to test the public reception of an ideology that zealots want to inject into the mainstream was manifested in social media comments by former Union minister Jairam Ramesh.

“A recent Padma Shri awardee has been hitting the headlines for her outrageous statements on Indian history. She’s only mouthing what RSS-affiliated pseudo-historians and self-styled scholars have been desperately trying to mainstream for years. Her sutradhars (puppet masters) are in power today,” the Congress veteran tweeted.

A recent Padma Shri awardee has been hitting the headlines for her outrageous statements on Indian history. She’s only mouthing what RSS-affiliated pseudo-historians and self-styled scholars have been desperately trying to mainstream for years. Her sutradhars are in power today.

Kangana had said at a public event that the Independence achieved in 1947 was “bheekh” and that India had got freedom in 2014. She later went on to target Gandhi in a series of posts on Instagram, questioning his non-violence and asking people to choose their heroes wisely.

The Congress sees a pattern as several BJP parliamentarians, including Pragya Singh Thakur, have been openly trying to legitimise Godse by describing him as a “true patriot”.

The design to undermine Gandhi is also demonstrated in Right-wingers trending hashtags in support of Godse on Twitter on Gandhi’s birth and death anniversaries.

The Congress is offering an easy-to-grasp analysis instead of getting into an academic debate so that its reading of the difference between Hinduism and Hindutva can be introduced into the public discourse, demolishing the general perception that the RSS-BJP represents the Hindu interest.

Although this path is fraught with risks as explaining nuances in a communally charged political atmosphere is not easy, the Congress believes the issue must be settled once and for all. Rahul Gandhi has taken up the cudgels.

Vallabh said: “Hinduism is inclusive, Hindutva is exclusive. Hinduism is sarv dharm sambhav (all religions are the same) and vasudhaiva kutumbakam (the world is one family). The agyani sarkari adaakara won’t understand non-violence because a mind filled with hate and prejudice can’t understand Gandhi. Gandhi was not acting in a film; sitting on a wooden horse to depict a battle scene.

“Gandhi faced the might of the British in the real world, a global power which had the most modern army. The sarkari adaakara should tell us where the RSS was hiding when freedom fighters were struggling against the British forces.”

Asked about this controversy, Congress MP Shashi Tharoor said at a programme: “My idea of Hinduism is the intensely personal idea of a religion that is about seeking your own truth and you seek ultimately within yourself. The very idea of personal truth essentially involves the acknowledgement that there may be other truths of other people and that you have to respect. The acceptance of difference is fundamental to Hinduism.

“What we are seeing with Hindutva is very different. It is a political ideology. It says that instead of a soaring, inclusive, majestic idea of Vedanta, you have ‘Hindutva’ that reduces ‘Hinduism’ to a badge of identity. That kind of talk in my mind is not Hindu, it is not Hinduism, it is not Hindu Dharma.”

Alarm on China steps in Bhutan