As the CWC meet remained inconclusive, the party will meet again at 4 pm 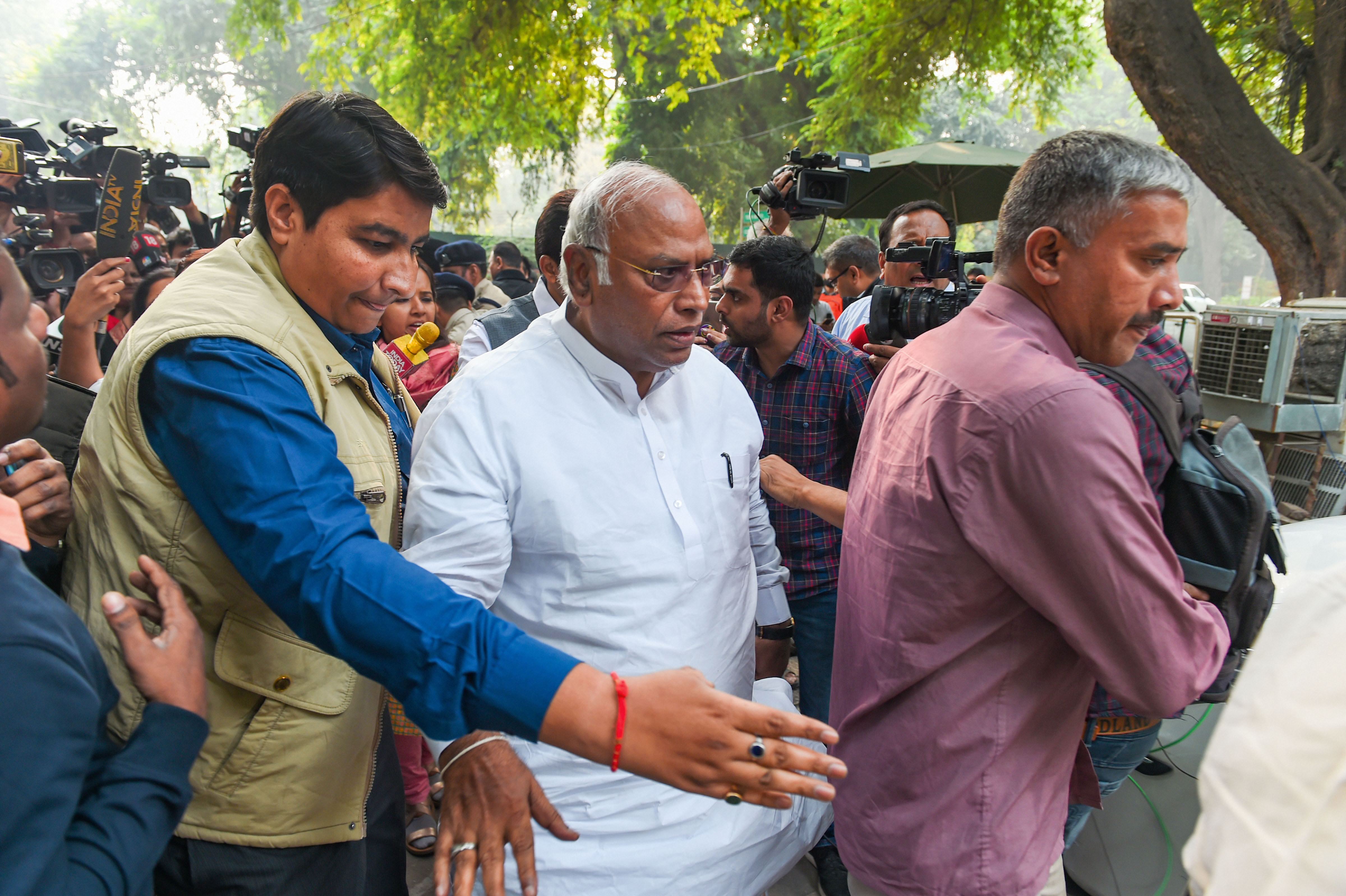 The Congress Working Committee met in New Delhi on Monday to decide on lending support to the Shiv Sena in forming a government in the state, but it remained inconclusive.

The party is expected to take a final call on the issue at a meeting of its top leadership with Maharashtra state leaders at 4 pm.

'We will sit again at 4 pm and will decide on the issue after a meeting with our state leaders,' AICC general secretary in-charge for Maharashtra Mallikarjun Kharge said after the CWC meeting.

Party president Sonia Gandhi chaired the meeting of the top leaders of her party at her residence, sources said, amid indications that the legislators were not in favour of fresh elections in the state.

The senior Congress leaders have left the resort in Jaipur, where newly-elected Maharashtra Congress legislators are staying, to attend the working committee meeting of the party in Delhi.

The CWC is the highest decision-making body of the Congress.

Kharge said leaders from the state will give their views to the leadership and the party will decide on its course of action after that.

'We have always maintained distance from the right wing party, which is the Shiv Sena. Their internal differences have precipitated the situation in Maharashtra,' said senior Congress leader M. M. Pallam Raju.

Hectic deliberations about the possibility of the Congress participating in government formation in Maharashtra started on Sunday after its long-time political adversary Shiv Sena was invited to form the government by governor Bhagat Singh Koshyari. He did so after the BJP announced it would not form government in the state.

Congress legislators held a meeting with senior party leaders on the issue in Jaipur on Sunday and said they did not want fresh elections in the state, party insiders said.

Kharge heard the views of all party MLAs and conveyed their feelings to the party chief and the CWC, they said.

The Sena is the second largest party in the 288-member House with 56 MLAs after the BJP (105). Given the stalemate between the two alliance partners, the role of the Congress with its 44 legislators and the Nationalist Congress Party with 54 MLAs is crucial. The Shiv Sena has time till 7.30 pm on Monday to stake claim.

Sources said NCP chief Sharad Pawar may also meet the Congress president on Monday to discuss the possibility of the two parties supporting a Sena-led government.

Kharge had earlier said in Jaipur that his party has 'accepted' the public mandate to it that is to sit in the Opposition.

'Now it is for the party high command to take a decision. We have left it to the party's high command,' he asserted.

'There are some statements... some are talking about offering support to Shiv Sena and some are denying, but there is no fact in such statements. The Congress party's stand is that we have to go with the public mandate and the Congress and NCP have to sit in the Opposition,' he told reporters.

In Maharashtra, the Pawar-led party said the Sena will have to walk out of the BJP-led National Democratic Alliance first to discuss having its support.

Senior Shiv Sena leader Sanjay Raut on Monday said there was no point in continuing its alliance with the BJP if it was not willing to fulfil its promise of sharing the chief minister's post in Maharashtra.

Reaching out to the Opposition parties, Raut said the Congress and the NCP should bury their internal differences to come up with a 'common minimum programme' in the interest of Maharashtra.

Sena leader Arvind Sawant, the lone party minister in the Narendra Modi cabinet, has announced his decision to quit the NDA government at the Centre.