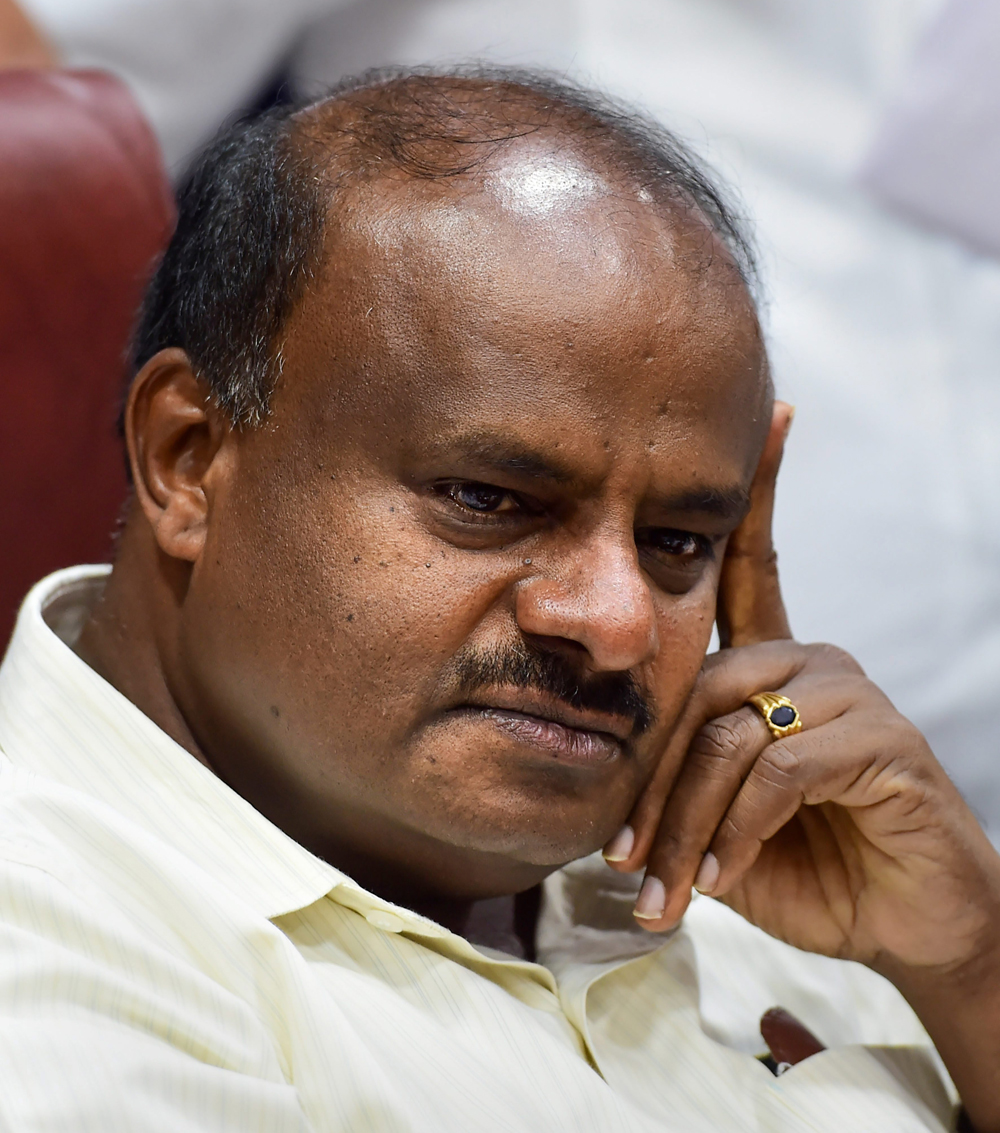 Karnataka’s shaken and dissidence-hit ruling coalition partners on Friday resolved to “strengthen the chief minister’s hands” and not let the state government collapse because of the drubbings both parties had received in the Lok Sabha elections.

A Congress leader hinted at a move by party president Rahul Gandhi to get a leading dissident inducted into the state government to stem the possibility of defections by him and his supporters.

Earlier, Congress and Janata Dal Secular leaders had met at the home of chief minister H.D. Kumaraswamy and dismissed any threat to their one-year-old government from “opponents who are trying to destabilise it”.

This immediately led to speculation that Kumaraswamy had offered to resign at the meeting but was stopped by the Congress representatives.

Kumaraswamy had last year publicly broken down, accused the Congress of not allowing him to function and said the pressures of running a coalition government were like “swallowing poison”.

On Thursday, the two allies were left with just one seat each as the BJP swept 25 of Karnataka’s 28 Lok Sabha constituencies. Even the lone other winner, Sumalatha, an Independent from Mandya, had contested with BJP support after the Congress denied her a ticket.

The meeting at Kumaraswamy’s home was followed by a cabinet meeting, where members of both parties expressed faith in the chief minister and ruled out a leadership change.

“Since this mandate has been given for the central government, this coalition government will continue to work for the people under Kumaraswamy’s leadership,” deputy chief minister G. Parameshwara of the Congress told reporters.

Although present at the media briefing, a downcast Kumaraswamy did not utter a word or take any questions. Kumaraswamy’s father — former Prime Minister H.D. Deve Gowda — and son Nikhil Gowda lost the Lok Sabha polls.

A senior Congress functionary told The Telegraph that Rahul had asked Kumaraswamy to accommodate the dissident Ramesh Jarkiholi in the cabinet “and end the dissidence”.

He said a few Congress ministers had recently offered to resign to allow the two allies to appease disgruntled lawmakers with cabinet berths and prevent any rebellion.

Ramesh has been a thorn in the coalition’s side since losing his cabinet berth in a shuffle to accommodate his elder brother and then dissident Satish Jarkiholi last December.

He has been hinting at leading an exodus to the BJP, and is believed to enjoy the support of three other unhappy Congress lawmakers: Mahesh Kumathalli, Bheema Nayak and J.N. Ganesh.

Forest minister Satish, however, made light of the “drama” by his brother. “We have been watching this drama for a year now. This could continue for another year, but this government will stay,” he said.

The day’s first meeting was an internal one by the Congress, which was headed by legislature party leader P.C. Siddaramaiah. It stressed the necessity of the coalition staying united.