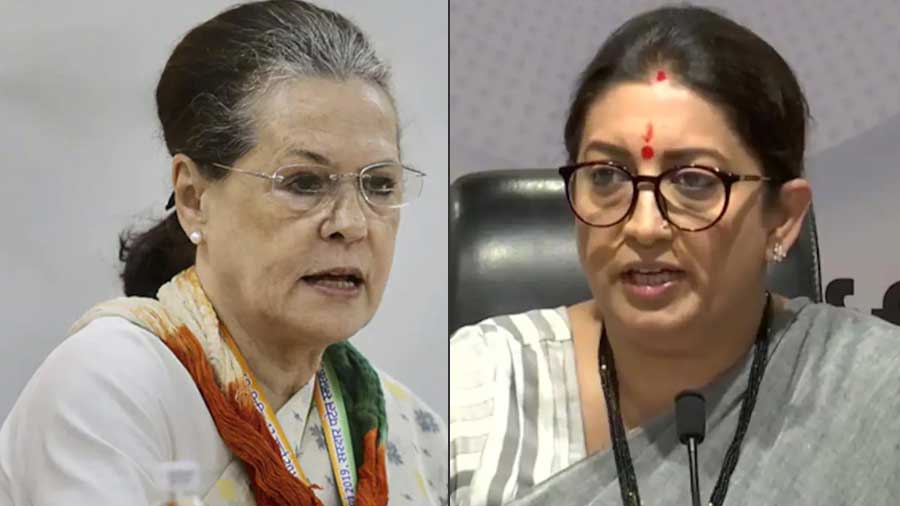 As the Lok Sabha adjourned soon after 12 noon, Gandhi walked across to the Treasury benches and sought to know from BJP member Rama Devi why she was dragged into the issue.

"Atrocious and outrageous behaviour by Union Minister Smriti Irani in the Lok Sabha today! But will she be pulled up by the Speaker? Are rules only meant for the Opposition?" Congress general secretary Jairam Ramesh said.

Interacting with the media on the Parliament premises, Congress' deputy leader in Lok Sabha Gaurav Gogoi alleged that objectionable slogans were raised against Sonia Gandhi.

"The BJP thought Sonia Gandhi would get scared and leave, but being the fearless leader she is, she went up to those women MPs and wanted to speak to them in a very dignified way but that was met with very abhorrent behaviour from BJP MPs and we saw that women and male MPs and ministers surrounded her and created an atmosphere where she could have been shoved and could have been hurt," Gogoi said.

"Women and male MPs of the BJP made objectionable remarks against Sonia Gandhi and their behaviour was objectionable as well," he alleged.

"This shows that the party which raises slogans in the name of women and culture, has shown how they disrespected an Indian woman and tried to hurt her honour," Gogoi said.

Gandhi remained fearless and dignified throughout, he asserted.

Asked about the BJP's outrage against Chowdhury, Gogoi said the Congress leader in the Lok Sabha has already apologised.

"Adhir Ranjan made a mistake and he accepted it but the way Sonia Gandhi was treated, it shows that the expectations they (BJP) have from us, they are unable to show it towards others," he said.

In a tweet, Gogoi said, "The brutal heckling, verbal assault and physical intimidation of one of the most dignified ladies of Indian politics Smt. Sonia Gandhi inside (Parliament) by the BJP was traumatic and sickening."

"That this assault by the BJP MPs took place inside the Parliament reflected the mentality of a mob," he said.

In another tweet earlier, Gogoi said one of the most senior leaders of India who is both an elderly lady, recovering from Covid was "attacked".

"She was subject to insults by one Union Minister and was on the verge of being pushed and injured by the BJP MPs," he said.

Congress MP Jyotsna Mahant alleged that Union Minister Irani disrespected Gandhi and spoke with her while pointing a finger at her.

"This is shameful. The BJP and Prime Minister Narendra Modi must apologise for this behaviour," she said.

Another Congress leader Geeta Kora said the behaviour Gandhi was subjected to was "not acceptable".

"The incident that happened in Parliament is a black spot in its history. The behaviour towards a senior MP, Sonia Gandhi, is unacceptable. Women and male MPs surrounded her, made objectionable comments and Irani spoke to her while pointing a finger at her repeatedly. She could have been hurt in the incident. I strongly condemn such behaviour and Smriti Irani and the prime minister should apologise in Parliament," Kora said.

Chowdhury's 'rashtrapatni' remark snowballed into a major political row with the BJP accusing the opposition party of insulting President Murmu and demanding Congress chief Sonia Gandhi should apologise to the nation.

In his defence, Chowdhury said he never intended to disrespect the President and his 'rashtrapatni' remark was a "slip of the tongue". He accused the BJP of making a "mountain out of a molehill" over the issue.